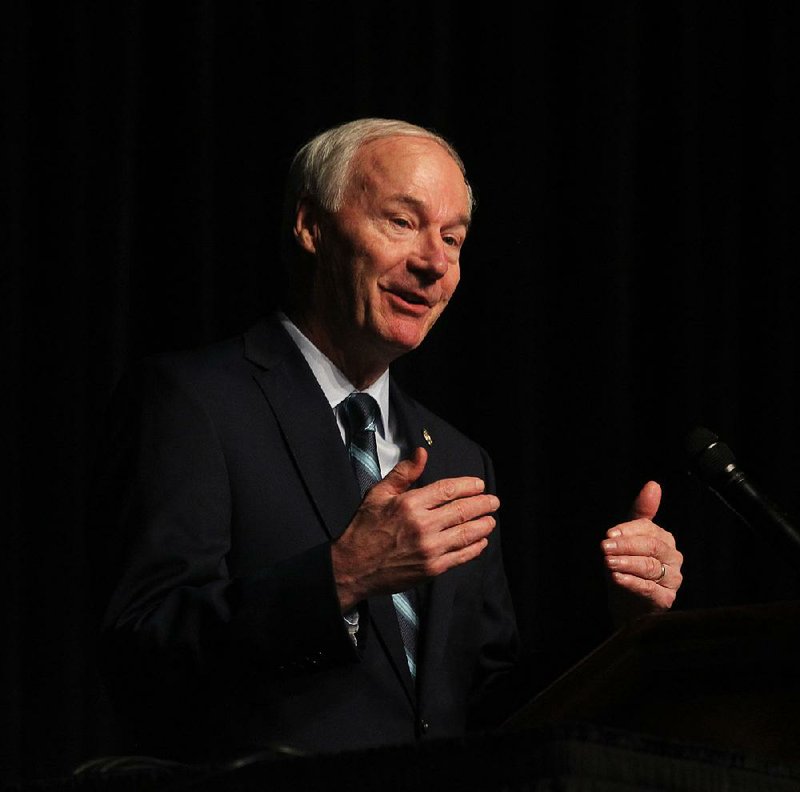 Gov. Asa Hutchinson talks Thursday in Hot Springs about plans for funding state highway improvements. He spoke at the Arkansas Rural Economic Development Conference and said he’d like the Highway Commission to develop a plan for how it would use money raised for roadways.

HOT SPRINGS -- Gov. Asa Hutchinson said Thursday that he would like the state Highway Commission to release a preliminary plan for using the $300 million expected to be raised by his road improvement tax package and then get input from Arkansans.

Speaking before about 350 people at an Arkansas Rural Development Conference organized by the Arkansas Economic Development Commission's Division of Rural Services, the governor noticed some highway commissioners in the audience.

"I think the fact that they are here recognizes the importance of this group in selling this program across Arkansas," he said.

Commissioners Alec Farmer of Jonesboro and Philip Taldo of Springdale were at the conference, a state Department of Transportation spokesman said afterward.

Two months ago, Hutchinson signed Act 416 that will levy a wholesale sales tax on gasoline and diesel fuels; raise electric and hybrid vehicle fees; and transfer at least $35 million a year in casino revenue and/or other state revenue to raise about $95 million a year for the Department of Transportation for highways. State officials project that the law also will raise about $13 million more a year each for cities and counties.

A separate part of the governor's funding plan will be decided in the 2020 general election. Voters will consider a proposed constitutional amendment that would permanently extend the half-cent sales tax for highways originally approved by voters in the 2012 election for a 10-year period. That tax is projected by state officials to raise about $205 million more a year for highways and $44 million more a year for cities and counties.

Hutchinson said Thursday that the Highway Commission is developing a model of how to spend the money raised.

"But before voters vote on it, they need to see how this impacts their community, their region of the state," he said. "So I know that they discussed this at the last Highway Commission meeting. They are continuing to work on drafts of this.

"I've asked them to make sure that they put out a preliminary plan and then hold hearings across Arkansas to hear from you to make sure that you have a voice, that your voice is heard, and that you help shape the future of highway funding here in this state," the governor said. "So, I am anxious for that to come out.

"I assure you that I will be working hard to make sure that in November of 2020 the voters know what this means for our rural highways, for our congested highways, for our farm-to-market roads that need to be improved and what it means for the future growth of Arkansas," Hutchinson said.

Afterward, Department of Transportation spokesman Danny Straessle said in a written statement that the Highway Commission's plan will factor in both Act 416 and the proposed permanent extension of the half-cent sales tax for highways, "or more accurately, a picture of what will be possible with the total funding available (Federal and State, including Act 416 and the proposed 0.5% sales tax)."

At the latest Highway Commission meeting on May 1, Transportation Director Scott Bennett "mentioned to the commission that our plan would be, at a minimum, to circle back with all of the civic clubs and chambers of commerce in the state to try to get on their agendas next year," Straessle said.

"This would be a follow-up to the work we did following the last legislative session when we introduced our Citizens Opinion Survey," he said.

"In addition, we are considering holding a series of 'regional meetings' similar to what we did in the late 1990s and early 2000s when we presented our needs studies at that time," Straessle said.

According to the National Conference of State Legislatures, 31 states and the District of Columbia since 2013 have enacted legislation that will increase or may increase overall state gasoline taxes.

But Missouri voters' decision on Election Day 2018 resulted in only 30 states implementing those increases, according to the conference.

So far this year, Alabama, Arkansas, Ohio and Virginia have enacted gasoline tax increases, although Virginia's applies only to a portion of the state, according to the legislative conference.