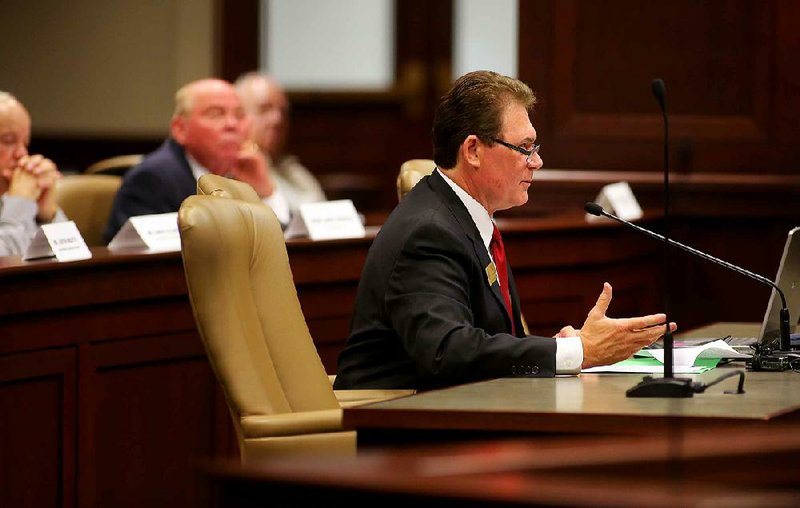 A legislative panel on Thursday approved a reduction in the fee charged to insurance companies that offer subsidized health coverage in Arkansas under the 2010 Patient Protection and Affordable Care Act.

Under the plan endorsed by the Legislative Council's Arkansas Health Insurance Marketplace Oversight Subcommittee, the state next year will stop collecting a fee equal to 1.25% of the premiums for plans sold through the healthcare.gov website.

That fee, expected to bring in $3.9 million this year, had gone to support the operations of the Arkansas Health Insurance Marketplace, an agency that was absorbed by the state Insurance Department on March 15 as a result of a law passed during this year's legislative session.

The marketplace, created by the Legislature in 2013, had been responsible for certifying the plans sold on the federal website, promoting enrollment in the plans and helping people sign up.

Act 107 abolished the marketplace's board and transferred its duties to the Insurance Department, in part so that the department could lower the fee.

Insurance Commissioner Allen Kerr told the subcommittee that a fee collected by the federal government to support healthcare.gov is also expected to fall next year, from 3% of the premiums to 2.5%.

The insurance companies pass the fees along to consumers in the form of higher premiums, so lowering them should help keep premiums down next year, Kerr said.

The lower fees also will save the state Medicaid program money, since it provides coverage under Arkansas Works through the same types of plans that are offered through healthcare.gov.

Kerr said money collected from the fee this year will go into a fund that will pay the cost of operating the Insurance Department division that absorbed the marketplace's duties.

That fund is expected to contain about $4.3 million at the end of the year, enough to pay for the division's costs, estimated at $500,000 a year, for at least eight years, Kerr said.

"The people of Arkansas have already paid for this for the next few years, and we're going to operate it accordingly," Kerr said.

He said the department is keeping a contract with the Arkansas Foundation for Medical Care, which operates a call center for consumers that includes operators trained as "navigators" who can help people enroll.

He said he hopes to reduce the annual cost of the contract from $350,000 to $250,000 while adding some additional services, which he declined to specify on Thursday.

The department will also continue to pay the advertising firm Cranford Johnson Robinson Woods to maintain the marketplace's website at a cost of less than $1,000 a month.

The department also will spend less than $100,000 on an outreach campaign to spread the word about the open-enrollment period that starts Nov. 1, he said.

By comparison, the marketplace board had budgeted $383,750 on outreach, through its contract with the advertising firm, during last year's annual sign-up period.

Kerr said he expects the department's smaller promotion effort to be offset by the insurance companies, which he said plan to "step up their advertising" this year.

"I think you're going to be very pleased," Kerr told lawmakers. "They can do this advertising a lot better than anyone else."