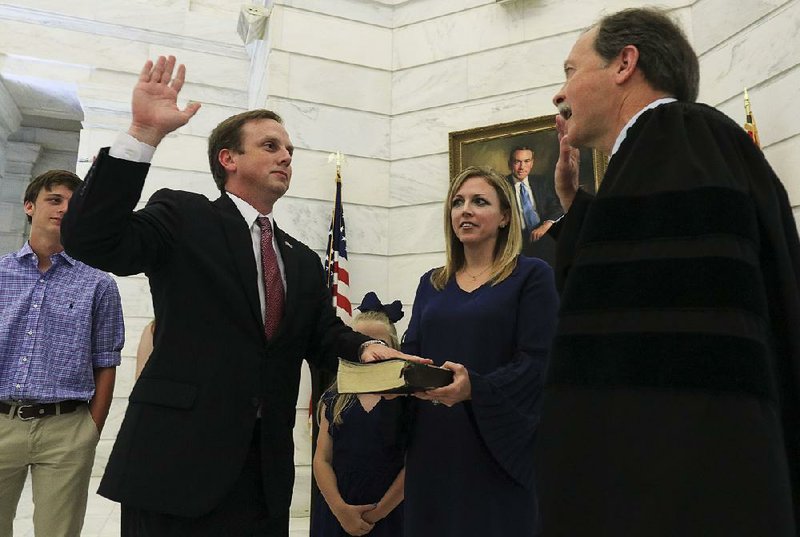 Also running for the post is House Revenue and Taxation Committee Chairman Joe Jett, R-Success, who announced his intentions April 25 -- a day after the Legislature adjourned its 88-day regular session.

In a related development, another potential candidate, Rep. Les Eaves, R-Searcy, said he decided on Friday not to run for House speaker after all, citing "personal reasons." He declined to say which candidate he would support.

Rep. DeAnn Vaught, R-Horatio, also has expressed interest in running for House speaker, but not if Shepherd seeks the post again. Vaught could not be reached for comment Friday.

The House will decide the House speaker-designate for the 93rd General Assembly, which covers 2021-23, at the end of next year's fiscal session. That session starts April 8.

Shepherd said in an interview Friday that he recently decided to seek re-election to the post because "in talking with the membership, I felt like there is the support there and so I am moving forward with that." He would also have to win re-election as a representative in the 2020 election.

Shepherd has served as speaker since fellow representatives picked him in June 2018 to succeed the previous speaker, then-Rep. Jeremy Gillam, R-Judsonia. After serving as speaker for nearly 3½ years, Gillam resigned, effective June 15, to take a job as director of governmental affairs and external relations at the University of Central Arkansas. Shepherd was unopposed in that election to finish the term as speaker for the 91st General Assembly.

In March 2018, the House elected Shepherd as speaker designate over Rep. Andy Davis, R-Little Rock, in a 57-41 vote. He was officially re-elected to the post Jan. 14. His current term over the 92nd General Assembly covers 2019-21.

Asked why representatives should vote for him over Jett, Shepherd said, "I don't like to frame it between me versus anybody else."

He said lawmakers had an efficient and successful regular session that addressed many major issues and served the 100-member House well.

"Those are things that I feel we can build off of and hopefully as we look towards the next General Assembly, we can carry over those things of working hard, of being efficient and of trying to do things in a fair manner, and so I think it's more of trying to continue something that I feel like we began this session," Shepherd said.

Jett, whom Shepherd reappointed as tax committee chairman on Jan. 14, said Friday of his speaker bid, "My intentions are to see the thing through."

"I have good support," he said in interview.

Jett said he has "serious heartburn" about speakers serving multiple terms, and Shepherd has twice indicated to him over the past few years that Shepherd wouldn't run for a second full term.

Whether he wins or loses in his bid for speaker, Jett said he plans to propose changing House rules to bar future speakers from serving more than one term.

"It isn't a shot at Shepherd by any means," said Jett, who called Shepherd an honorable representative.

If Shepherd is re-elected speaker, that would give Shepherd and Gillam's 2011 freshman representative class eight years as speaker, from 2015-23, Jett said.

Shepherd said he made it clear in his bid for his first term for speaker that he was running for that term, and not for multiple terms -- but he didn't rule out a seeking a second term.

"I never told anybody I wouldn't run for a second term, [but] I didn't set out to be a two-term speaker," he said.

Asked about limiting speakers to serving one term, Shepherd said, "That's the first I heard of that particular proposal. The House gets the chance to vote on the speaker every two years."

Shepherd said he has tried to spread committee assignments and leadership roles to as many people as possible.

Shepherd, 43, an attorney, has served in the House since 2011 and formerly served as chairman of the House Judiciary Committee.

Jett, 59, a retired farmer and owner of a trucking company, has been in the House since 2013. He has served as the House Revenue and Taxation Committee since 2015. He switched from the Democratic Party to the Republican Party in December 2016 before Gillam reappointed him as tax committee chairman in January 2017.