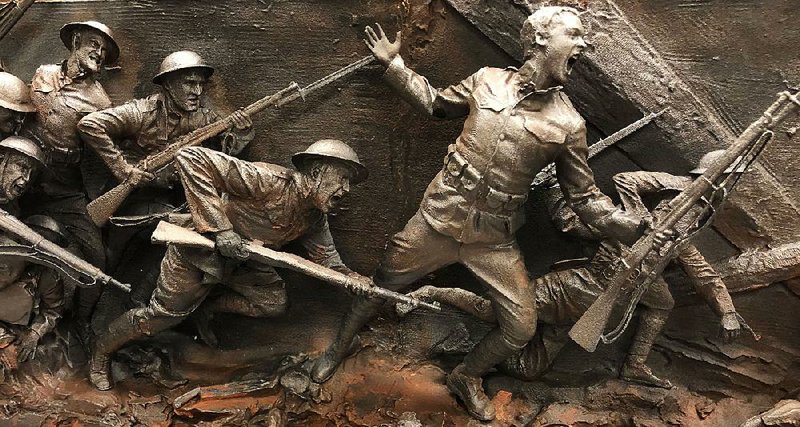 This battle scene is part of the design of the World War I Memorial, which is to become part of Pershing Park along Pennsylvania Avenue in Washington, D.C.

WASHINGTON — With many of the bureaucratic hurdles overcome and much of the fundraising complete, supporters of the new World War I Memorial say they’re hopeful they can break ground this fall.

“We’re getting close to wrapping up the design. We’re about 75% of the way through,” said Joseph Weishaar, the project’s architect and a Fayetteville native. “It’s really coming along.”

The U.S. Commission of Fine Arts signed off Thursday on the monument’s “interpretive elements,” including the quotation that will be carved in dark granite above the “peace fountain.”

In April, commissioners had weighed in on the site’s walkway configuration and its “lighting strategy” as well as an updated version of the bronze sculpture that will be the memorial’s centerpiece.

The commission will discuss the memorial again at its July meeting, the 13th time the memorial has been on the agenda since November 2015.

Officials say they don’t know how many more meetings will be necessary.

“It’s progressing toward a likely approval later this year. But, of course, the commission has the final say,” said longtime fine arts commission secretary Thomas Luebke.

The memorial elements will be added to Pershing Park, named for the leader of U.S. forces in World War I, Gen. John J. Pershing.

A 1.76-acre plot along Pennsylvania Avenue, a couple of blocks from the White House, it was briefly a pristine urban oasis. But after years of neglect, it had greatly deteriorated.

Weishaar, a 2013 graduate of the Fay Jones School of Architecture and Design at the University of Arkansas, Fayetteville, won an international competition in January 2016 to design the memorial.

Originally, Weishaar’s plan called for sweeping changes to the park. The overhaul was scaled back, however, after protests from preservationists and a determination, by the National Park Service, that the existing park was eligible for placement on the National Register of Historic Places.

Instead of bulldozing much of Pershing Park and starting over, the new concept keeps much of the original design. The biggest change will be a 58-foot-long bronze sculpture titled A Soldier’s Journey.

Millions of people died in World War I, which began after the June 28, 1914, assassination of Archduke Franz Ferdinand of Austria.

The conflict, which lasted more than four years, altered world maps, erasing empires and destroying a generation of men.

The United States entered the war in April 1917, enabling England, France and their allies to finally defeat the nations aligned with Germany and Austria-Hungary.

Unlike those who served in World War II, Korea and Vietnam, the 116,000 American soldiers who perished in World War I have no monument of their own in the nation’s capital.

In 2014, Congress authorized the World War I Centennial Commission to build a monument.

Walmart is one of the memorial’s top donors. General Motors, FedEx and the National Football League are also major backers.

“We’ve raised about $27 [million] out of $40 million so [we’re] two-thirds of the way,” said Edwin Fountain, vice chairman of the U.S. World War I Centennial Commission.

Walmart, which donated and raised $14.5 million in 2000 to help build the World War II memorial, made its donation to the World War I memorial earlier this year, spokesman Blair Cromwell said.

“The project aligns with our veterans philanthropic efforts and leans into the community aspect of our evolving giving strategy,” Cromwell said in an email. “We are specifically funding the educational component of the project including the visitor experience and the virtual field trips.”

At Thursday’s meeting, Fountain’s fellow commissioner, Libby O’Connell, described the ways that technology could enhance the experience for visitors.

Park visitors, she said, would be able to dial up Pershing on their smartphones and hear a recording of the commander addressing members of the American Expeditionary Forces. Or they’d be able to access an audio tour guide similar to those used in museums. Visitors might even watch an “augmented reality” dogfight overhead between two World War I-era biplanes, she said.

Thanks to the Internet, the educational components will be accessible around the world, according to O’Connell.

Thursday’s decision to move forward came despite opposition from Justin Shubow, head of the National Civic Art Society and one of President Donald Trump’s recent appointees.

Earlier in the presentation, he had argued that the lettering on the list of 19 battles on one display needed to be bigger so that the names would be easier to read.

Two inches tall “seems awfully small to me,” he said.

Later, he expressed concerns about the educational components that had been proposed, arguing that the commission should be building a memorial, not an outdoor museum.

“A memorial should be a site for commemoration, not information,” he said.

“I don’t want to visit a memorial where I see everyone on their phone walking around making phone calls,” he said. “It detracts from the solemnity of the site.”

O’Connell, the World War I commission member and a trained historian, said that tech-friendly offerings would enhance, not undermine, the experience.

“I think this [war] is the most overlooked important event in American history,” she said. “By providing more information to people, we are not undercutting the solemnity of the commemoration, but we are encouraging all visitors to understand the importance and the impact of this war.”

Ultimately, all of the commissioners except Shubow voted to approve the “interpretive elements.”

In an interview, O’Connell said it’s important to commemorate what was once known as the Great War.

“So many people have forgotten about World War I. And really, it is the conflict that shaped our century and continues to shape our lives today,” she said.

The approval process is lengthy.

It’s crucial, though, to get things right, she said, noting that the memorial will be around for a long, long time.

“It’s here for the ages. We’re not building something that has a 10-year life expectancy,” she added.