Democrat-Gazette out to shift print readers to digital by '20 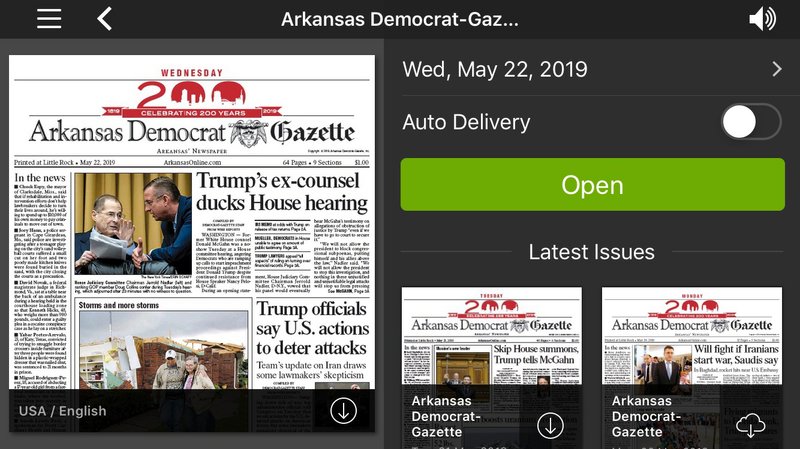 The Arkansas Democrat-Gazette has distributed more than 10,000 Apple iPads in its effort to convert print subscribers into digital subscribers by the end of the year in counties where the newspaper circulates.

Walter Hussman hopes to convert Arkansas Democrat-Gazette print subscribers to digital by the end of the year in all 63 counties where the newspaper has traditionally been circulated.

That doesn't include the 12 counties served by the Northwest Arkansas Democrat-Gazette, which operates autonomously.

If all goes according to plan, the print edition of the Arkansas Democrat-Gazette would cease by the end of the year, except for Sundays, said Hussman, who is publisher of the newspaper and chairman of WEHCO Media, Inc.

The digital conversion has been in the works for a couple of years, but Hussman said "there's a lot of misunderstanding about it."

Hussman spoke to employees Friday about the digital shift. Shortly afterward, social media lit up with posts containing inaccurate information about the conversion.

Hussman is providing Apple iPads to subscribers so they can read a replica of the newspaper online. Hussman said he's prepared to spend $12 million on the tablet computers, which retail for $329 each before tax.

He has distributed more than 10,000 of them so far, starting with outlying areas of the state.

More info on the digital edition

The digital subscription rate is $34 to $36 a month, regardless of whether the subscriber wants an iPad.

Hussman said he needs to convert 70% of subscribers from print to digital to make his plan profitable.

"It may not work," he said. "It's a risk, but it's a risk we're willing to take. We want to remain a viable journalistic enterprise in Arkansas and we don't see any other way to do it."

The alternative is not good.

Many newspapers have cut back on staff and printed pages. They've cut costs across the board, resulting in weaker news coverage, Hussman said.

"I don't think there's any long-term business success in doing that," said Hussman. "I think that's a dead-end strategy."

Some owners gave up and sold out.

Across the country, newspapers have been hollowed out by corporate raiders, leaving some cities with ghost newspapers that are largely devoid of journalism. It's called "vulture capitalism."

Hussman said he's too invested in Arkansas journalism to let that happen here.

"Can you imagine me doing that after I've been publisher of this paper for 44 years?" he asked.

Hussman said he wants to be a good steward and keep "robust journalism" alive in Arkansas. He doesn't plan to cut $1 from the newsroom, at least through 2020, according to his plan.

"We would like to add people in the newsroom," Hussman said. "If we could sell more subscriptions, then we could do more investigative reporting, more watchdog journalism."

With a digital newspaper, there's no cost to increase the size of the news hole, he said.

Cuts will occur elsewhere in the business, such as production and distribution. Hussman said he didn't have an estimate Tuesday for the extent of those cuts.

Hussman said the Arkansas Democrat-Gazette is losing money after being profitable for years. He said he's got to figure out a way to make the newspaper profitable again.

"Sometimes you've got to risk your business in order to save it," he said. "That's what we're doing. And that's kind of familiar territory. We did the same thing with the Arkansas Gazette."

Hussman was referring to the newspaper war from which the Arkansas Democrat-Gazette emerged in 1991. He shifted the afternoon Arkansas Democrat to morning and invested in the newsroom, eventually winning the war over Gannett, which owned the Gazette at the time.

Rick Edmonds, a media business analyst with Poynter, a nonprofit school for journalists, sounded skeptical about the iPad plan.

"I think it's risky and expensive," he said. "I don't know, but I sort of say it remains to be demonstrated how much adverting would flow to that type of presentation."

Then, after the newspaper began providing iPads and training sessions, subscribers softened up. About 140 of the 200 made the digital switch, including a 93-year-old man who didn't have a computer, cellphone or iPad, Hussman said. The man had been reading the paper for more than 60 years and wanted to keep doing so. He's got an iPad now and reads it online.

Hussman said newspaper employees have been holding iPad sessions at public venues, but if subscribers can't get there, the digital team can visit them at home.

"We're going to smother people in customer service like they haven't seen in 50 years," said Hussman.

Larry Graham, vice president of circulation for the Arkansas Democrat-Gazette, said subscribers often come to the sessions with a negative attitude about the shift to digital.

"But after they sit down with our digital sales team for three minutes or an hour, they come out saying, 'Hey, this is pretty good,'" said Graham.

"If we can get it in front of them and show them the app, they love it," he said, referring to the computer application needed to read the replica edition of the newspaper.

Readers are particularly happy when they realize they can increase the size of the type on the iPad, Graham said.

Hussman said most readers seem to prefer the replica version of the newspaper to the website. He said other newspapers made a mistake by expecting readers to give up the print edition for the newspaper's website.

He cited The Times-Picayune of New Orleans, which was recently acquired by John Georges, owner of The Advocate, a daily newspaper based in Baton Rouge.

"The Times-Picayune asked people to change their reading habits from reading a newspaper to reading a website," Hussman said. "We're letting subscribers read the exact same format they're familiar with. I think that's one of the keys to why it's successful."

Subscribers in Hot Springs and Conway recently got letters about the digital shift. The print edition will soon end for them, except on Sundays.

Hussman said there are still a few counties in central Arkansas receiving the daily print edition. He said some details of the digital shift there have yet to be worked out.

"We're up to our ears in alligators right now trying to move from town to town and do all these meetings," he said, referring to his speaking to civic groups and the digital team training people on how to use an iPad.

Since February, digital subscriptions have included the delivery of a Sunday print edition of the newspaper, said Graham. He said that began with the digital shift for subscribers in Camden, Magnolia and El Dorado.

Hussman said the paper has been getting an 80% conversion rate in places where it has offered the print Sunday edition in addition to the digital paper.

"We were not brilliant enough to know when we started this that we should offer the Sunday paper," he said.

Graham said cities that were converted to digital before February don't receive the Sunday print edition, and it has yet to be determined if that will change. That would include Jonesboro, Blytheville and Mountain Home, among others.

Hussman said the Sunday print edition will be sold in newspaper racks and other locations around the state, in addition to being available digitally. He said most legal notices will be published in the Sunday edition.

The Sunday print edition, which is often stuffed with advertising circulars, is profitable, Hussman said. The rest of the week, the paper loses money, he said.

Subscribers who want only the Sunday print edition can get it for $32 a month, said Hussman, but they'll get the digital version with it whether they want it or not.

Hussman said Internet accessibility doesn't seem to be a problem, although the conversion rate in rural areas hasn't been as good as in cities.

"We're finding the vast majority of homes already have Internet," he said.

Hussman said the digital version of the paper will have several crossword puzzles. Readers can work them through the iPad keyboard, he said.

Hussman said some readers prefer to read the replica version of the paper on a desktop computer, which also can be done with a digital subscription.

After getting all the subscribers possible converted to digital this year, Hussman said representatives may go out next year and try to solicit new subscribers of the digital Arkansas Democrat-Gazette.

Print Headline: Democrat-Gazette out to shift print readers to digital by '20