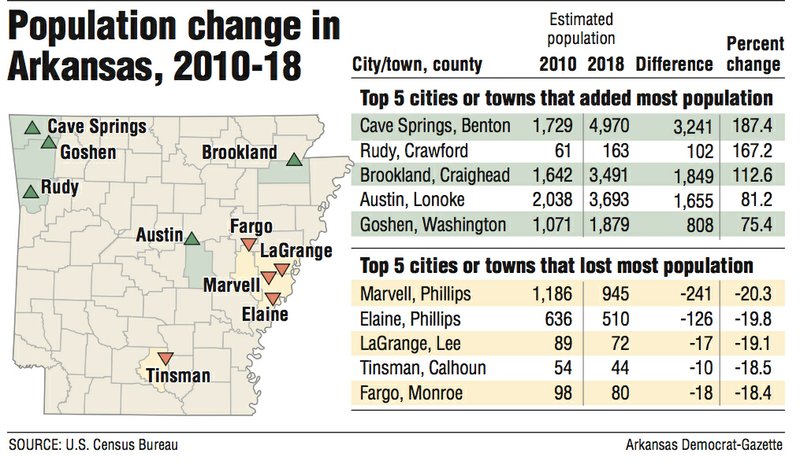 In that same time frame, Arkansas also has been above average across the U.S. in population growth and housing growth. Arkansas had more cities and towns in the top 1,000 for population increases -- 36 -- than all but eight states.

Arkansas is a starker-than-normal example of what demographers say is a national trend: Rural areas are contracting, while urban areas are expanding. Economists say that's consistent with job growth patterns; companies are hiring more often in cities.

What makes the gap between the haves and have-nots starker in Arkansas may be in part a matter of people migrating within the state, said David Sorto, a research associate at the University of Arkansas, Fayetteville's Center for Business and Economic Research.

"It's a tale of two Arkansases," he said.

Alison Wright, associate research/extension specialist at the Arkansas Economic Development Institute at the University of Arkansas at Little Rock, suggested that the small size of Arkansas' towns may have contributed to their higher percentage declines.

Overall, the state's population trend is "distinct areas where the population is growing but the majority of the state is losing population," Wright said.

That extrapolation from today's data release is consistent with what she expected from the county population estimates released last month.

"The fact that almost two-thirds of our counties have lost population since 2010 would appear to explain that the cities in those counties are also losing population," Wright said.

Finding a town in the Delta that bucks the trend of population decline -- one that isn't a suburb or a bedroom community of Jonesboro -- is difficult.

With an estimated 2018 population of 248, Gilmore is larger than it was in the 2010 census count, when it was 188 people, although census estimates from the same year show a population of 265. By either measure, the town is smaller than it was in previous decades and the city by new Interstate 555 lies just north of several towns that are losing population.

Officials with the town did not return a voice mail or an email Wednesday.

Officials with the Delta Regional Authority could not be reached for comment Wednesday.

Pine Bluff and Little Rock are exceptions to the trend of large cities that are seeing growth. Pine Bluff's population dropped by thousands during the past decade, from 49,083 counted in 2010 to 42,271 estimated in 2018.

In April, when Pulaski County population estimates showed the county's growth was dependent on births because of a net loss in migration, a spokesman for Little Rock said Mayor Frank Scott Jr. plans to push policies, economic development and public-safety measures to attract millennials and others to the city.

"Jobs growth and other economic indicators have been stagnant for sometime in Little Rock, and that's why voters elected Mayor Scott, to grow our economy and make Little Rock a place people want to work, live and play," spokesman Stephanie Jackson said in an email in April. "Public Safety and jobs growth are two of his top priorities to accomplish that goal."

Still, Little Rock and other metropolitan areas in the states have unemployment levels below the national average, Sorto said.

That's provided an opportunity for Arkansans to find jobs and remain in the state, even if they can't stay in their original, smaller towns.

The places that are growing have economic opportunities surrounding major institutions, including institutions that can supply labor, such as universities, Sorto said. He noted the major research universities in the faster-growing metropolitan areas -- the University of Arkansas, Fayetteville, Arkansas State University at Jonesboro and colleges and universities in central Arkansas.

Cities that have major universities, state government operations, military bases, ports or "quality infrastructure" or are within close proximity to major economic areas can thrive, he said.

Census data released today also include housing unit estimates, which can be an indicator of population and economic growth.

While Arkansas is just below the national averages, which are estimates, it's in the middle of the pack among states in housing growth since 2010, 25th out of the 50 states and the District of Columbia. That's higher than neighboring states Oklahoma, Missouri and Mississippi.