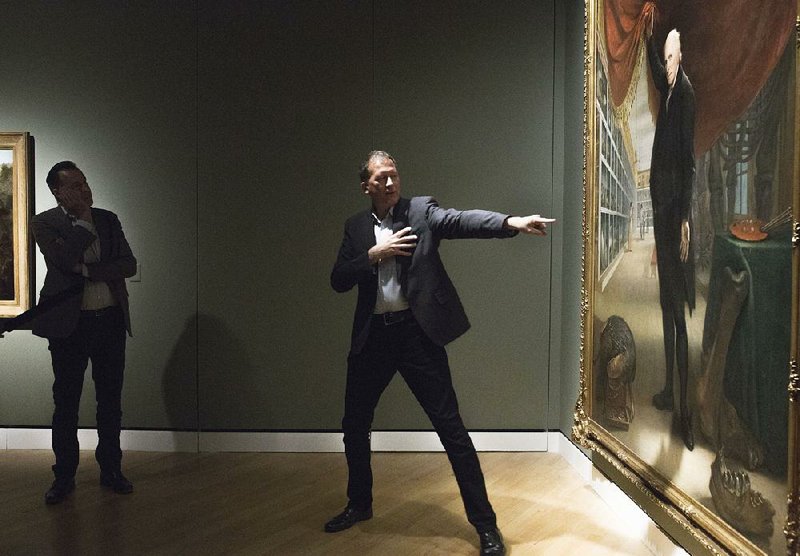 Alan Braddock, associate professor of art history at the College of William & Mary, discusses a piece by Charles Willson Peale entitled “The Artist in His Museum” during a media preview Thursday at Crystal Bridges in Bentonville. ( NWA Democrat-Gazette / Charlie Kaijo)

Artists have long found inspiration in nature, and a new exhibition at Crystal Bridges Museum of American Art traces their evolving ideas over three centuries about the natural world and humanity's place in it.

"Nature's Nation: American Art and Environment" opens Saturday at the Bentonville museum, where it will be on view through Sept. 9. Originating from the Princeton University Art Museum, the exhibition traveled to the Peabody Essex Museum in Salem, Mass., before making its final stop at Crystal Bridges.

"Nature's Nation" was co-curated by Karl Kusserow of the Princeton museum and Alan C. Braddock from the College of William and Mary. On a preview tour Thursday, the men guided visitors through the galleries where 100 artworks trace three centuries of evolving ideas about the natural world and humanity's place in it.

Braddock offered his own summary of the show's theme: "This is 300 years of American artists helping to invent ecological consciousness, [and] how artists have been bearing witness to the changes in our environment for a long, long time.

"More than just showing us problems," he added, "they try to imagine solutions, and to imagine the beauty that we should try to preserve."

Mindy Besaw, an assistant curator at Crystal Bridges, said the pieces selected for the exhibition "tell a real narrative and story that really sheds new light on old favorites, and then helps us to see reflections back on our permanent collection ... in a whole new way, because it's going to ask you to look at things just from a new lens."

The exhibition is organized chronologically into three sections. The first section, The Order of Things, covers the 1700s through the early 1800s. It includes the oldest item in the exhibition -- a 1731 painting by English naturalist Mark Catesby of the now-extinct Carolina parakeet, a colorful bird that once inhabited a region stretching from Florida to the Great Plains, including the Ozarks.

Catesby's study of the bird is paired with another painted in 1844 by John James Audubon, who wrote about seeing the parakeets in abundance while traveling through Arkansas and Missouri. A third painting, by contemporary artist Walton Ford and titled Dying Words, is a meditation on extinction that mimics the composition of the famous 18th-century painting The Death of General Wolfe, Braddock pointed out.

"The dying words here are not the words of a general but of a dying species," Braddock said. "It's a little bit humorous and a little bit poignant at the same time."

The second section, Visualizing Human Impact, addresses the environmental consequences of white settlement on land populated by indigenous people, as well as industry, war and urbanization. Artwork in this section spans the mid-19th century through the early 20th. Photographs by Jacob Riis depict the grim plight of immigrants living in overcrowded tenements, while paintings by artists such as Albert Bierstadt and Thomas Cole show romanticized landscapes of pristine wilderness.

Lastly, the section labeled Nature's Vital Forms features works from the 20th century to the present day. Notable 20th-century works include Frank Lloyd Wright's Tree of Life Window, made in 1904 of glass and brass in an oak frame. Besaw said Georgia O'Keeffe's famous painting Jimson Weed/White Flower No. 1, currently on loan to another museum, will be part of the exhibition when it returns to Crystal Bridges.

Also represented in this section is Depression-era photographer Dorothea Lange. A portrait of a man with a weathered face and tattered hat is titled Ex-tenant Farmer on Relief Grant in the Imperial Valley, California, and a somber 1938 landscape titled Tractored Out, Childress County, Texas shows neatly plowed rows of barren soil punctuated by an abandoned farmhouse.

The final gallery contains works showing how humans are causing profound changes to the environment. Subhankar Banarjee's aerial photograph Caribou Migration I, of pregnant caribou migrating over the snowy mountains of the Arctic National Wildlife Refuge, was taken in 2002 as Congress debated opening the refuge to oil drilling. The last artwork of the exhibition, placed next to the exit doors, is Edward Burtynsky's photograph titled Oil Spill #10: Oil Slick at Rip Tide, Gulf of Mexico, June 24, 2010, in which ripples of black oil float on an expanse of blue-green water.

On exiting the galleries, visitors find themselves in a "reflection area" featuring a wall that depicts actions people can take to protect and preserve the environment, such as composting or recycling. Visitors are invited to choose one of these actions that inspires them and write a pledge on an adjacent chalkboard to follow through with that activity.

Visitors over the Memorial Day weekend will also have a chance to see the "The Wall that Heals," a three-quarter scale traveling replica of the Vietnam Veterans Memorial in Washington, D.C. The wall, now on display in Buckeyball Field at the museum entrance, will remain through 1 p.m. Monday.

In conjunction with the exhibition, a host of lectures, film screenings, art classes and other events are scheduled. The full calendar of programs is posted on Crystal Bridges' website. Also, an award-winning, full-color catalog published by the Princeton University Art Museum accompanies the exhibition. 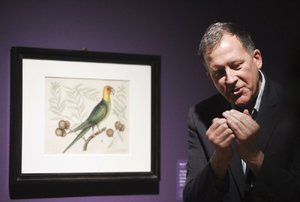 Photo by Charlie Kaijo
Alan Braddock, associate professor of art history at the College of William & Mary, discusses a piece by Mark Catesby entitled “The Parrot of Carolina” during a media preview Thursday at Crystal Bridges in Bentonville. 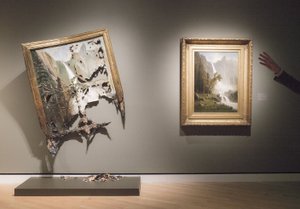 Photo by Charlie Kaijo
A piece called Bridal Veil Falls, Yosemite by Albert Bierstadt is shown Thursday during a media preview for a new exhibit at Crystal Bridges in Bentonville. 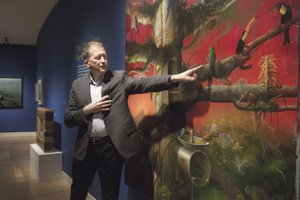 Photo by Charlie Kaijo
Alan Braddock, associate professor of art history at the College of William & Mary, discusses Thursday a piece by Alexis Rockman titled Aviary during a media preview at Crystal Bridges in Bentonville.