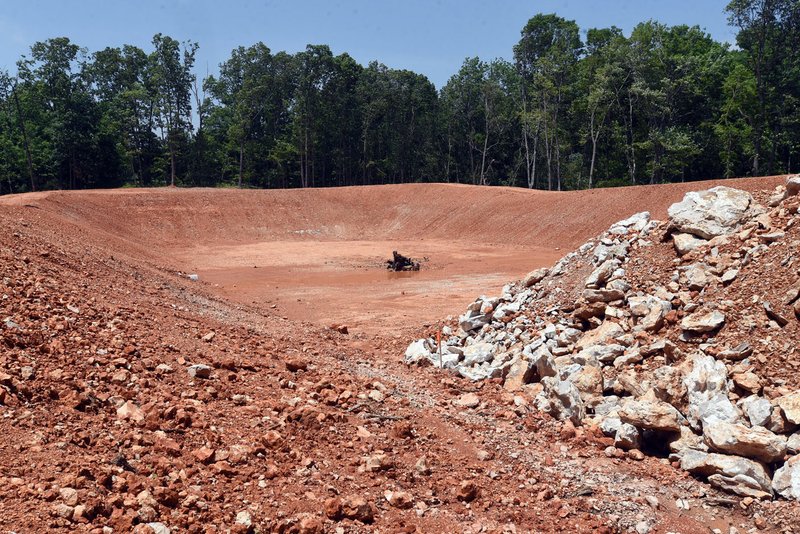 NWA Democrat-Gazette/FLIP PUTTHOFF A new berm is under construciton Wednesday at the Benton County Sheriff's Office shooting range. The range when refurbished will double in length to 100 yards and allow deputies to tackle more real-life scenarios, said Maj. Kenneth Paul. It should open in about a month.

BENTONVILLE -- The Benton County Sheriff's Office shooting range will get an upgrade after more than 20 years of service, officials said.

The range when refurbished will double in length to 100 yards and allow deputies to tackle more real-life scenarios, Paul said. It should open in about a month. It's been closed since November, he said. Deputies are mostly using the ranges at the Arkansas Law Enforcement Training Academy in Springdale and the Gravette Police Department while the county's is closed, he said.

The range is at Benton County Quails Unlimited, 11670 Arkansas 72 West. It was established by former Sheriff Andy Lee, Paul said.

Quails Unlimited and the county signed a long-term lease recently allowing the county to move the range from 50 yards to 100 yards, Paul said. The lease is for eight years and can be renewed each year after that. There's no cost to the county, he said.

The expanded site is on about 2.5 acres, said Josh Beam, the county's chief engineer.

The Road Department is doing the site dirt work, which will save the Sheriff's Office about $250,000, Paul said.

Jay Frasier, county administrator, said two employees have prepped the site, but they have been hampered by recent rain. Water has so saturated the ground his team will have to assess any damage, especially to the dirt berms, he said.

"It has to be dry for at least three days before we can get in there," Frasier said. "It's all dirt."

Cement will be poured after the dirt work is finished, including a retaining wall to keep the berms in place, Paul said. Grass and sod will be the final touches, he said.

"A threat can come from any direction," Paul said.

He noted the 100-yard setup is beneficial because some calls the Sheriff's Office receives have long approaches to homes. Different scenes, such as clearing a structure or overcoming a barricade, can be set up on the range, he said.

Justice of the Peace Dustin Todd served with the Sheriff's Office for about three years starting in 2013. He remembers trying to qualify with an AR-15 rifle at 100 yards. To do so, he had to walk back 50 yards off the site and down a slight hill. From there, he had to shoot over the lip of the hill and above a picnic table to the target.

"You're dealing with life-and-death situations," Todd said. "Now, deputies will get experience from different angles. You can't script every shooting, and they are not always straight ahead."

The range will be 90 feet wide with 15 shooting lanes, up from the previous eight, Paul said.

Benton County has 150 employees who must qualify with a firearm each year. The state minimum for qualification is once a year, but the county is moving to twice a year, Paul said.

Bentonville police SWAT and Centerton police have used the range in the past, and Paul expects that to continue. The range isn't open to the general public, he said.

"It's going to be more professional looking," he said. "It will look like a true shooting range."

Springdale also is looking at build a firing range. Police Chief Mike Peters recently asked the city Water and Sewer Commission to consider allowing police to build a range on land the commission owns on Wager Road in western Springdale. The commission agreed to allow him to explore the idea.

Springdale Police rely on the shooting range at the training academy, which is in the city, not far from the proposed site for the new range.

Washington County has a 25-yard indoor pistol range built about 2008 behind the detention center, Chief Deputy Jay Cantrell said. West Fork and Farmington police use the range, as do agents from the federal Drug Enforcement Agency and the Federal Bureau of Investigation, Cantrell said. The site can be set up for tactical situations and other training, he said.