Series full of streaks between 2 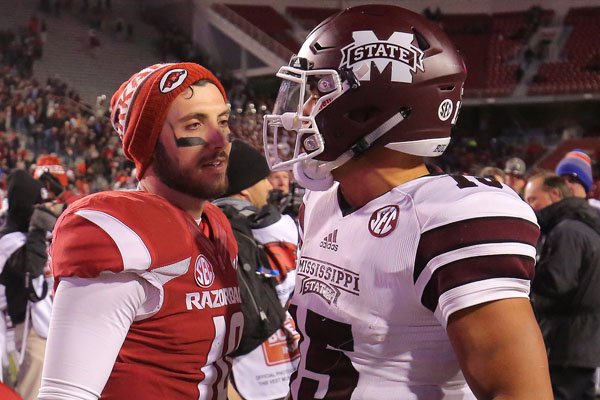 FAYETTEVILLE -- The University of Arkansas leads the all-time series with Mississippi State 16-12-1, with all but two of the meetings taking place since the Razorbacks joined the SEC in 1992.

Arkansas leads the series 3-2 in Fayetteville and 6-1-1 in Little Rock, and the teams are tied 7-7 in Starkville, Miss.

Since Arkansas joined the SEC, it owns a 16-10-1 edge in a very streaky series.

[Video not showing up above? Click here to view » https://www.youtube.com/watch?v=5b3MOjTGHpM]

Since then, the Bulldogs have won six of seven, including all three played in Arkansas for their first road wins in the series.

Both Arkansas and Mississippi State have won by a series-record 46 points against each other. The Razorbacks claimed a 52-6 win in Fayetteville on Nov. 22, 2003. The Bulldogs matched that score exactly last season in Starkville, Miss. Prior to that, Mississippi State's largest margin of victory in the series was 31 points in a 45-14 decision in 2012.

There was definitely winter precipitation in parts of Northwest Arkansas on Thursday morning, as temperatures lingered in the high 20s before peaking in the low 40s.

The forecast for game day for Mississippi State at Arkansas is much better. A sun-filled day is projected for today with the temperature topping out in the low 50s, according to The Weather Channel.

On Saturday morning, the forecast calls for clear skies turning to sun by 8 a.m. with very little chance for rain and a high temperature of 49 degrees around the 3 p.m. kickoff.

Mississippi State is serving one of the more interesting NCAA penalties this season after the school was hit with an academic fraud violation involving a tutor taking tests for players.

According to news accounts, there are 10 Bulldogs players who are serving eight-game suspensions, and they are being spaced throughout the season.

The Bulldogs have been given leeway to pick when the eight games are served, according to reports. For each game, a list of players who will not be available that day is released by school officials.

Mississippi State is barred from revealing the names or details of the suspensions due to the Family Educational Rights and Privacy Act law that protects student records.

The Razorbacks are 62-31-4 in homecoming games all time.

They are 8-8 in homecoming games against SEC competition. This will be the first time Mississippi State has served as the Razorbacks' homecoming opponent.

"He's obviously a very good running back, he leads the SEC in rushing and is a very dynamic player," Henry said. "A true freshman quarterback who's done a good job managing their offense, and a lot of older guys up front. ... A real big offensive line and they do a pretty good job of getting movement and getting on their assignment. So it's going to be tough. We're gonna have to play our best. They're going to try to play their best, so we need to match that."

Razorback junior Rakeem Boyd has rushed for 706 yards to rank fourth in the SEC and 32nd nationally. Boyd averages 88.3 yards per game and 5.39 yards per carry, which is seventh among SEC qualifiers.

Mississippi State's Kylin Hill has 793 rushing yards to lead the SEC, though his average of 99.1 yards per game trails Georgia's D'Andre Swift (107.4) and Vanderbilt's Ke'Shawn Vaughn (100.4). Hill is 29th in the nation.

The sports website watchstadium.com recently asked all 130 FBS head coaches and every conference commissioner for their favorite musical acts and almost every coach responded.

Kenny Chesney was the top pick across the country with eight coaches naming him, including Tennessee's Jeremy Pruitt. Eric Church placed second with six votes, followed by Dave Matthews Band with five.

The cap touted the Cowboys' appearance in Super Bowl 27, spelled out with the Roman numerals XXVII.

"This isn't my dad's hat," he said when asked if it belonged to his father, Mark Henry. "Believe it or not, my mom [Jenny] was at this game. They were in Pasadena [Calif.] playing. I found this in my grandpa's attic. Weird story. I was like, 'That's kind of a sweet hat.' So he let me wear it. No affiliation obviously. I'm a Chargers fan. Shout out to my brother, Hunter, in L.A. I'm a Chargers fan, but this is neat."

Former Razorback tight end Hunter Henry is in his fourth NFL season after being taken in the second round of the 2016 draft by the Chargers.

The Cowboys downed the Buffalo Bills 52-17 at the Rose Bowl in Super Bowl XXVII.

Sophomore safety Joe Foucha had a career-high 13 tackles against Alabama.

"Played great and did a tremendous job," Arkansas defensive coordinator John Chavis said. "Really proud of him. Means a lot to him as it does all our young men, but by far he played his best game."