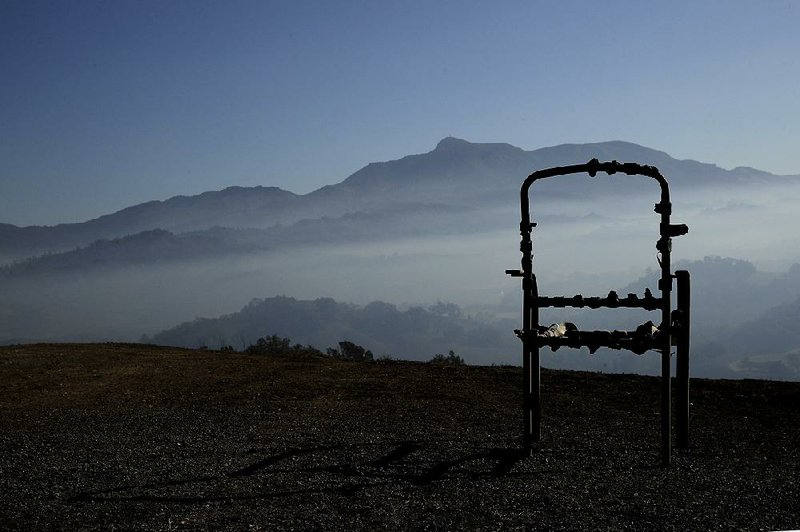 LOS ANGELES -- Authorities lifted evacuation orders for a farm community Saturday as firefighters made progress on a wildfire in Southern California that continued to threaten about 2,500 homes and buildings into the evening.

Ventura County officials allowed an unknown number of residents in the Somis community to return home Saturday morning after firefighters contained 30% of the Maria fire, which has burned nearly 15 square miles and forced nearly 11,000 people to evacuate.

While fire activity subsided overnight Friday, winds and low humidity entered their fourth day Saturday and made another difficult day for firefighters. Also, an unexpected weather system moved in from the south, raising the threat of lightning strikes and wind gusts of 20-30 mph over the region, the National Weather Service said.

Police in Santa Monica urged beachgoers to go indoors after lightning was reported over the city.

In Ventura County, north of Los Angeles, fire crews battled to keep flames from the Maria fire away from orchards and farms in the rural area. Three buildings were destroyed.

The fire started on a hilltop northwest of Los Angeles on Thursday during what had been expected to be the end of gusty Santa Ana winds.

Its cause was under investigation, and there was a possibility that an electrical line was involved -- as has been the case in other recent fires.

In Northern California, more people were allowed to return to areas evacuated because of the Kincade fire burning for days in Sonoma County wine country.

The 121-square-mile fire was 72% contained Saturday, the California Department of Forestry and Fire Protection said.

The number of destroyed homes reached 175, and 35 more were damaged, the department said. Many other structures also burned.

The Contra Costa County Fire Protection District identified the utility's equipment as the cause of three smaller fires that cropped up Oct. 27 in the San Francisco Bay Area suburbs of Martinez and Lafayette.

While the cause of the Kincade fire hasn't been determined, Pacific Gas & Electric reported a problem with a transmission tower near the spot where the fire started.

For power companies, the pressure continues to build. Southern California Edison, one of the state's largest electric companies, disclosed Friday that just 13 minutes before the Maria fire began, the utility had begun to return electricity to a nearby circuit that earlier had been shut down to try to prevent wildfires.

Ron Gales, a spokesman for the company, said it was unclear whether the return of electricity was related to the fire but the company had alerted a state regulator and would cooperate with any investigative agencies.

Politicians and residents have increasingly expressed anger at power companies for sparking some of the state's deadliest fires. That anger grew in recent weeks when the companies turned off power to millions of people to prevent starting more such fires.

Southern California Edison's chief executive, Pedro Pizarro, told investors on a telephone conference last week that a preliminary investigation from the Ventura County Fire Department found that the company was likely responsible for the Woolsey fire last year. That blaze killed three people and destroyed more than 1,600 homes and businesses.

"Absent additional evidence, Southern California Edison believes it is likely that its equipment was associated with the ignition of the Woolsey fire," Pizarro said on the call.

Four mass power shut-offs in a month have disrupted life in California, forcing schools and business to close, and plunging millions of people into darkness. Wildfires that the blackouts are aimed at preventing have continued in the meantime, with blazes starting across much of the state and forcing hundreds of thousands to evacuate.

Still, utilities seeking to avoid liability will probably continue to cut power to keep live electric lines from sparking fires when strong winds are forecast. Companies such as Pacific Gas & Electric and Edison International can reduce the need for blackouts, but the potential long-term solutions are costly and time-consuming, and aren't guaranteed to work.

"I think there will be sections of California where this is a feature of the landscape essentially for good," said Michael Wara, a professor at Stanford University.

The state and utilities have some options to lessen the need for shut-offs, but they all come with their own challenges.

Sticking power lines underground is an obvious, popular way to keep them from sparking wildfires. It's also time-consuming and expensive, costing as much as $2.4 million per mile in the suburbs, according to a 2012 survey, although there are ways to trim that cost.

There are other ways to harden the electric grid, and California's utilities are pursuing those solutions. Wooden utility poles can be swapped for ones made of steel or composite materials, and power lines can be installed with protective coating so they don't easily spark when tree limbs hit them. But again, those solutions can't happen quickly or cheaply, especially for a utility like Pacific Gas & Electric whose service territory spans 70,000 square miles.

The utility that's widely seen as doing the most to fire-proof its grid is Sempra Energy's San Diego Gas & Electric. However, it also resorts to shut-offs when rain hasn't fallen for months and winds rise.

Pacific Gas & Electric Corp. Chief Executive Officer Bill Johnson in recent months warned state regulators that it might take 10 years to dramatically reduce the need for deliberate blackouts, and politicians are still criticizing him for it.

California utilities would like to change "inverse condemnation," a legal doctrine that makes them financially liable for fires sparked by their equipment, even when they follow all of the state's safety rules.

Fear of liability gives the companies a big incentive to err on the side of shutting off power whenever a windstorm looms.

But even if the state changes the way inverse condemnation works, the utilities could be sued by fire victims claiming that the companies were negligent in maintaining their equipment, said Toby Shea, an analyst for Moody's Investors Service.

Additionally, there remains the incentive of saving lives. "They are stuck between a rock and hard place," Shea said of the utilities. "It's difficult, and it won't get better until" power providers fully harden their infrastructure, he said.

Information for this article was contributed by John Antczak of The Associated Press; by David R. Baker and Mark Chediak of Bloomberg News; and by Nicholas Bogel-Burroughs of The New York Times.