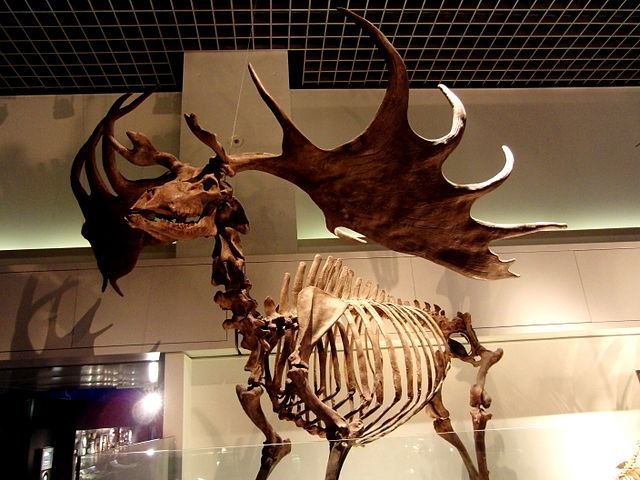 The antlers of the prehistoric deer Megaloceros giganteus inspire awe and bemusement in equal measure. They were the largest the world has ever known — up to 12 feet wide and 5 feet high — atop the head of a creature otherwise no taller than a modern moose.

But when does such grandeur cross the line into parody? Many deer use their antlers to spar for mates and territory. It can be hard to believe that M. giganteus, saddled as it was with a set the size of a Fiat 500, "was able to hold its head up, let alone fight," said Philip Cox, an anatomy professor at the University of York in England.

Some paleontologists have argued that the impressive head ornaments were just for show. But a study published recently in Proceedings of the Royal Society B used a novel method to suggest that the deer's giant antlers were indeed colossal combat weapons and to suggest how they may have been wielded. (See arkansasonline.com/128antler.)

To prove that the giant antlers were used in ancient deer-on-deer conflict, Ada Klinkhamer, a paleontologist at the University of New England in Australia and the lead author of the paper, devised a method of "virtual crash testing," she said.

She and her colleagues ran the fossilized skull and antlers of M. giganteus through a scanner to create a three-dimensional model. This wasn't easy.

The specimens were so big they had to be scanned at a hospital with a large enough CT scanning device. This inspired great fascination and amusement from the hospital's employees, said Marcelo R. Sanchez-Villagra, a paleontologist at the University of Zurich who was in charge of this step and recalled "how kindly the technician treated the skull."

They then did the same for fallow deer, red deer and moose. With these scans, the team used finite element analysis, a method that allows researchers to model physical systems and see what happens to them when force is applied. The technique was originally developed for engineers, with uses such as helping find the weak points of a dam.

The researchers ran their models through common deer fighting moves. They produced heat maps detailing how much stress would be put on the antlers in each scenario, and where exactly the stress would be concentrated.

In some cases, the stresses on M. giganteus antlers were far higher than those experienced by the other deer, suggesting that the moves weren't as feasible for the extinct species. The pushing actions employed by sparring moose, for instance, might have broken the antlers of the prehistoric creature if used too regularly.

But the stress of other fighting techniques was "in line with some of these other living deer," Klinkhamer said. Twisting maneuvers likely would have worked, especially if the fighters locked horns in the middle of the antler, rather than on the far ends.

And they probably didn't go all-out. "It might have been more ritualized actions than really chaotic shows of dominance," Klinkhamer said.

Although questions remain — especially regarding the initial clash that generally begins the physical part of a deer duel, which researchers were not able to model — the study "goes some way to indicating that Megaloceros could indeed fight with its antlers," said Cox, who was not involved in the study.

However, it doesn't necessarily make the antlers themselves any easier to comprehend.

"Ridiculous, to be carrying that around on your head, really," Klinkhamer said.