Whistleblower said to be open to queries; lawyer states offer made to House GOP 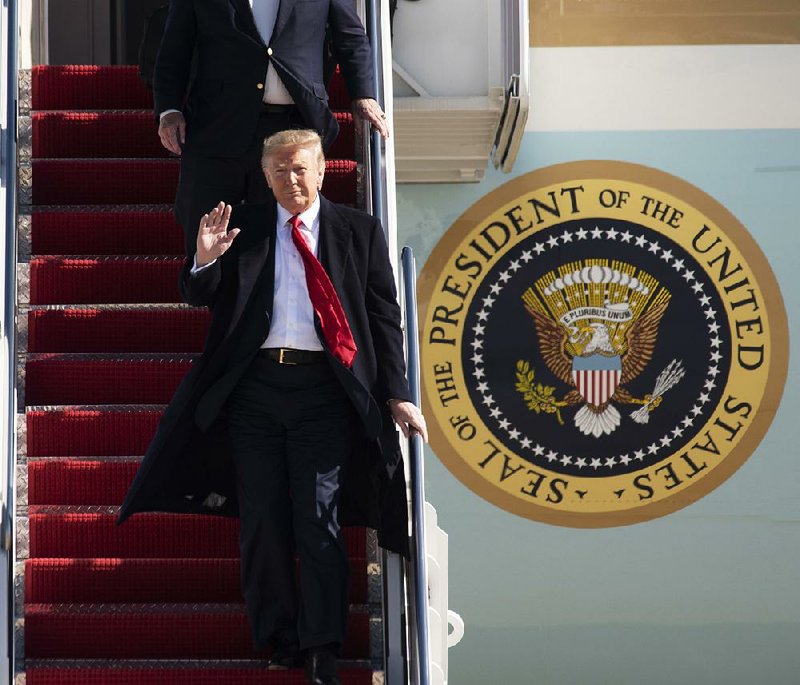 President Donald Trump disembarks from Air Force One on Sunday at Andrews Air Force Base in Maryland. Trump later pushed for the media to divulge the identity of the whistleblower, telling reporters at the White House that “you’d be doing the public a service if you did.”

WASHINGTON -- A lawyer for the whistleblower who raised alarms about President Donald Trump's dealings with Ukraine said Sunday that his client is willing to answer written questions submitted by House Republicans.

The offer -- made to Rep. Devin Nunes of California, the top Republican on the House Intelligence Committee -- would allow Republicans to ask questions of the whistleblower, who spurred the Democratic-led impeachment inquiry, without having to go through the committee's chairman, Rep. Adam Schiff, D-Calif.

Attorney Mark Zaid tweeted that the whistleblower would answer questions directly from Republican members "in writing, under oath & penalty of perjury," part of a bid to stem escalating efforts by Trump and his GOP allies to reveal the person's identity. Only queries seeking the person's identity won't be answered, the lawyer said.

"Being a whistleblower is not a partisan job nor is impeachment an objective. That is not our role," Zaid tweeted. "So we have offered to Devin Nunes."

"We will ensure timely answers," he said.

Nunes' office did not immediately comment. Rep. Jim Jordan, R-Ohio, a House Judiciary Committee member who has been critical of the impeachment investigation's process, said in a statement that written answers wouldn't be sufficient to probe and cross-examine the whistleblower.

"You don't get to ignite an impeachment effort and never account for your actions and role in orchestrating it," Jordan said. "We have serious questions about this individual's political bias and partisan motivations and it seems Mark Zaid and Adam Schiff are attempting to hide these facts from public scrutiny. Last week's testimony raised even more concerns about the anonymous whistleblower and our need to hear from them, in person."

Trump has repeatedly demanded the release of the whistleblower's identity, including tweeting Sunday that the person "must come forward." The whistleblower raised concerns about Trump's July 25 call with Ukrainian President Volodymyr Zelenskiy, in which he pressed Zelenskiy to investigate Trump's political rivals. That call became the catalyst for the impeachment inquiry.

The whistleblower's secondhand account of the call has been providing a road map for House Democrats probing whether the president and others in his orbit pressured Ukraine to investigate political opponents, including former Vice President Joe Biden.

"Reveal the Whistleblower and end the Impeachment Hoax!" Trump tweeted.

Later Sunday, Trump pushed for the news media to divulge the whistleblower's identity, asserting that the person's account of events is incorrect. The whistleblower's complaint has been corroborated by people with firsthand knowledge of the events who have appeared on Capitol Hill.

U.S. whistleblower laws exist to protect the identity and careers of people who bring forward accusations of wrongdoing by government officials. Lawmakers in both parties have historically backed those protections.

The whistleblower has become a central fixation for Republicans, and in particular the president. Republicans view a political opportunity in unmasking the CIA official, whom the intelligence community's inspector general said could have "arguable political bias." The inspector general nevertheless found the whistleblower's complaint to be "credible."

Zaid said his team had addressed the issue of alleged bias with Republican members of the Intelligence Committee and had stressed the need for anonymity to maintain the safety of the whistleblower and that person's family, "but with little effect in halting the attacks."

"Let me be absolutely clear: Our willingness to cooperate has not changed," tweeted Andrew Bakaj, another attorney representing the whistleblower. "What we object to and find offensive, however, is the effort to uncover the identity of the whistleblower."

Bakaj wrote on Saturday that "their fixation on exposing the whistleblower's identity is simply because they're at a loss as to how to address the investigations the underlying disclosure prompted."

The president has pushed to expose bias in the initial allegations against him to paint the entire impeachment inquiry as a partisan, politically motivated investigation. To this point, Republicans have largely fought the impeachment inquiry on process, not substance, arguing it was tainted because interviews were conducted in closed sessions -- though GOP lawmakers were in attendance -- and complaining that House Speaker Nancy Pelosi, D-Calif., had not called a vote to launch the investigation.

But Pelosi called such a vote last week, and the inquiry may soon shift into open hearings. Now, Trump is demanding that his allies defend his actions, insisting that he did nothing wrong while arguing that quid pro quos like the one allegedly offered to Ukraine are common occurrences while leveraging power in conducting foreign policy.

House Minority Leader Kevin McCarthy, R-Calif., said Sunday that he had not yet discussed the whistleblower's offer with Nunes, but McCarthy stressed that the person should answer questions in a public appearance before the committee.

"When you're talking about the removal of the president of the United States, undoing democracy, undoing what the American public had voted for, I think that individual should come before the committee," McCarthy said on CBS' Face the Nation.

"We need an openness that people understand this," he added.

McCarthy argued that the impeachment process is flawed, even though Republicans' previous objections -- that the inquiry had not been formally voted on -- were dealt with Thursday with the vote to set up formal impeachment procedures.

House Majority Leader Steny Hoyer, D-Md., mocked McCarthy's complaints, saying that the GOP leader had neither the facts nor the law on his side and was just "pounding the table.

Meanwhile, Rep. James Clyburn, D-S.C., warned on CNN's State of the Union that moving ahead with a mostly party-line impeachment inquiry could damage Democrats at the polls in 2020.

"Sure it could. And that would make this whole process more political than I would like for it to be," Clyburn said. He added that beyond politics, "this country is worth saving."

Also on State of the Union, White House counselor Kellyanne Conway said the president's conduct toward Ukraine -- the centerpiece of the Democrats' inquiry -- was "not impeachable." Conway added that she didn't know if the White House had held up aid for a time to achieve Trump's goal of having Ukraine investigate Biden and his son, Hunter Biden.

No GOP House members voted in favor of the resolution last week. Pelosi said Friday in an interview with Bloomberg News that she expects the Democratic-led inquiry will begin public hearings this month.

House Democrats leading the investigation are preparing this week to wrap up the private fact-finding portion of the inquiry, which has been conducted almost entirely in the closed chambers of the House Intelligence Committee. As soon as next week, Democratic lawmakers and aides say, the Intelligence Committee could begin public hearings featuring prominent administration officials, an effort intended to present a case to the public.

Before then, though, investigators have scheduled almost a dozen additional private witness depositions, beginning today. It is unclear how many of those called to testify will appear, given the Trump administration's orders not to cooperate. Unlike earlier witnesses, many of whom were nonpartisan career officials, those whom investigators are now trying to secure sessions with are senior Trump administration political appointees who may be less likely to buck the White House's wishes, even under subpoena.

Investigators issued subpoenas late Friday for John Eisenberg, the top legal adviser to the National Security Council, and Brian McCormack, the former chief of staff to Energy Secretary Rick Perry, to answer questions today. It was unclear whether they would show up. A lawyer for at least one other witness scheduled for a deposition today, Robert Blair, indicated over the weekend that his client would not appear. Blair is the national security adviser to the acting White House chief of staff, Mick Mulvaney.

House Democrats have called Perry to sit for questioning on Wednesday. They wanted John Bolton, the president's former national security adviser who was said to have been alarmed by pressure being put on Ukraine, to take questions Thursday. Their appearances are also in doubt.

Schiff said Bolton "has very important information about the president's misconduct that the American people should hear."

Lawmakers have invited Bolton to appear but have not issued a subpoena for his testimony. Trump said he's not going to insist that Bolton not testify. Bolton's lawyer has said he will not appear without a subpoena.

"It's up to him, and it's up to the lawyers," Trump told reporters.

McCarthy on Sunday brought up another witness he wants to question: Schiff. He named the chairman of the Intelligence Committee as "the very first person we should bring."

Information for this article was contributed by Hope Yen, Jonathan Lemire and staff members of The Associated Press; by Hailey Waller, Laura Davison, Mark Niquette and David McLaughlin of Bloomberg News; by Catie Edmondson and Nicholas Fandos of The New York Times; and by Jacqueline Alemany, Paul Kane and Felicia Sonmez of The Washington Post. 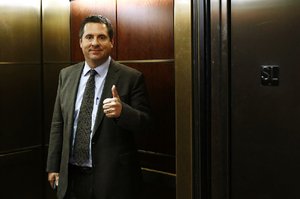 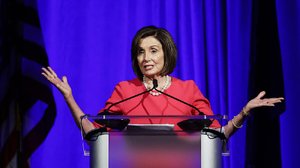 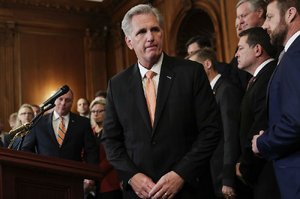 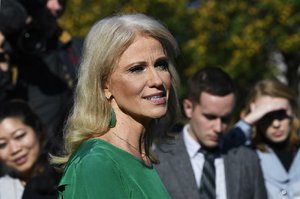 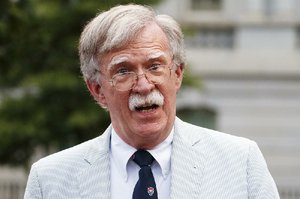 Print Headline: Whistleblower said to be open to queries; lawyer states offer made to House GOP