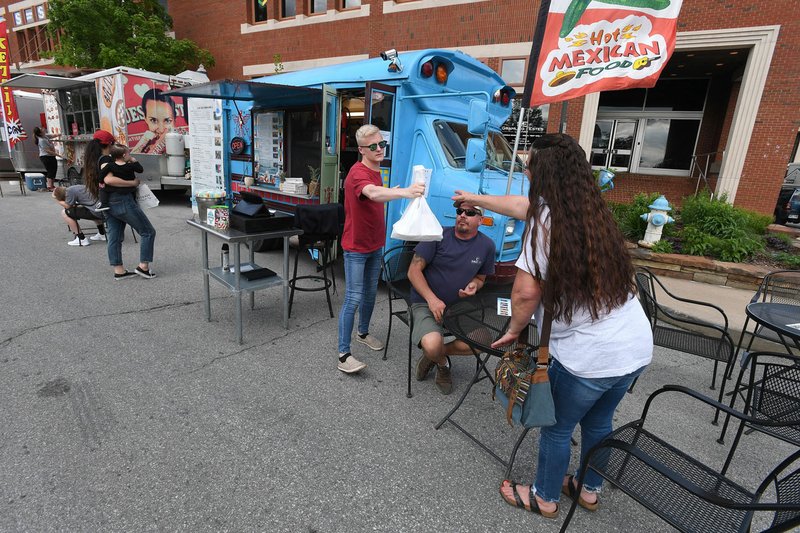 In this file photo Trenton Cargill (left) of Springdale hands an order to Stephany Bley and her husband, Chris Bley, of West Fork on May 2 during First Thursday at the Fayetteville square. The City Council approved a ban on expanded polystyrene foam containers during its Tuesday meeting.

Some restaurant owners say they support the idea, but it’ll cost customers.

The ban applies to foam plates, cups, bowls and clamshell containers. It doesn’t apply to packing material or foam products that people can buy in stores.

Proponents of the ban say it’s necessary to help keep Styrofoam out of the environment, particularly waterways.

The ban also will help meet the city’s environmental goals because expanded polystyrene foam is made from fossil fuels, said Peter Nierengarten, the city’s sustainability director.

Council member Teresa Turk sponsored the ban and said Styrofoam takes 500 years to decompose. Expanded polystyrene foam by volume makes up about a quarter of the material in the regional landfill, she said.

Styrofoam accounted for the second-highest amount of trash collected from the West Fork of the White River in 2014, just behind plastic, Turk said.

“We clearly have a problem here, and I think this would go a very long way in at least reducing our consumption of Styrofoam,” she said.

Turk has also encouraged residents to provide their own to-go containers, which is what she often does.

However, compostable containers cost more than Styrofoam ones, Rohrbach said. They can cost about 25 cents to 40 cents more per item, which adds up with all of the containers given to customers, he said.

Profit margins for restaurants are generally lower compared with other businesses, so incremental costs mean a lot, Rohrbach said.

Todd Martin, owner of Southern Food Co., said the restaurant has been sourcing new environmentally friendly to-go containers. He added that he’s no fan of Styrofoam, but other containers do cost more.

Adrienne Shaunfield, owner of The Farmer’s Table Cafe, said using eco-friendly products has been part of the cafe’s business model since the beginning. The restaurant uses locally sourced food, which also is more expensive upfront but is worth it in the long-run, she said.

Shaunfield said her family doesn’t get takeout food from places that use Styrofoam, but her family will go to those places after the ban, she said.

“Eco products aren’t perfect, especially if they don’t get composted, which many don’t,” Shaunfield said. “That has always been an issue for me. It’s not a perfect solution but still better than petroleum-based products.”

Nierengarten said containers marketed as compostable won’t biodegrade in someone’s backyard compost pile, but the city can process them at its compost facility. A drop-off box for compostables and food waste should be set up at city collection centers in about a month, he said.

The city hopes to provide residential curbside pickup for food-waste and compostable material in the next few years, he said.