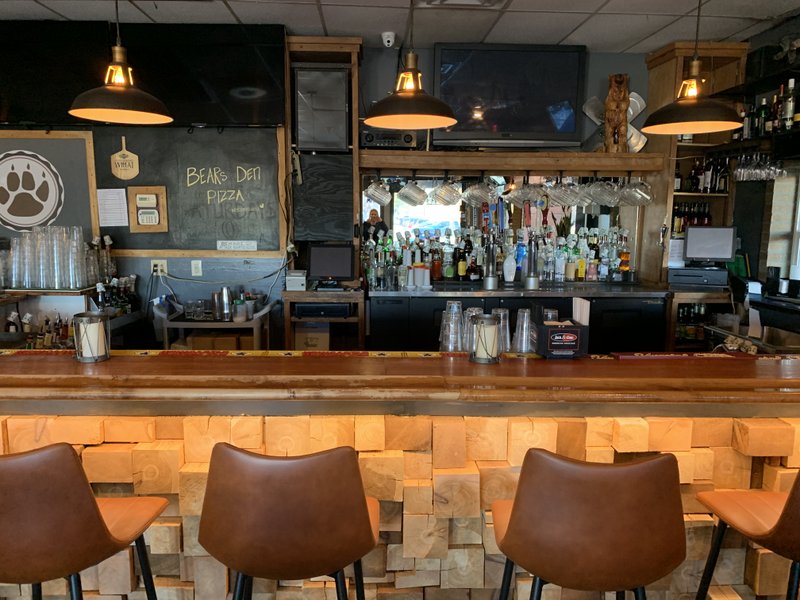 The renovated bar at Bear's Den Pizza in Conway.

CONWAY — Bear’s Den Pizza has long been known as a dive, ideal for late-night bites and drinks, but a recent renovation and menu overhaul aims to change that identity.

The restaurant, rumored to have been made over as a part of Gordon Ramsay’s show 24 Hours to Hell and Back, reopened Tuesday after a closure over the weekend.

Owner Brad McCray said he wouldn’t confirm or deny the connection to the show, but the restaurant has been completely updated inside.

He said Bear’s Den hopes to draw bigger crowds earlier in the day, though hours will remain 3 p.m. to 2 a.m. daily for now.

“With this renovation inside and revamped menu, we’re a comfortable place to come for happy hour, dinner and, hopefully, lunch,” McCray said.

[Gallery not showing up above? Click here to view » https://www.arkansasonline.com/1112bearsden/]

Suspicion the restaurant was being featured on Ramsay’s program arose when the show’s Hell on Wheels truck was set up in a parking lot near the corner of Bruce Street and Farris Road in Conway over the weekend, steps away from the University of Central Arkansas campus. The vehicle serves as a temporary kitchen while a "struggling restaurant" is revamped.

Even though Bear’s Den Pizza was closed over the weekend for renovations, from the outside Saturday, it still appeared to buzz with activity.

Commenters on the restaurant’s Facebook page tried to ask if the restaurant was set to be featured, but comments from the account said everything was “top secret” and it would “confirm and deny nothing.”

The changes that debuted Tuesday include a newly designed interior, which replaced beer cans and vinyl booths with sleek modern furniture and rustic elements, including a textured wood front for the bar and a shiplap wall.

The bathrooms, which McCray called “world-renowned” for being “the worst,” have also been completely redone on the women’s side, with trendy metal wash basins and wood-slat stalls. McCray said the men’s restrooms will be renovated soon.

Aside from physical changes, the menu has also been changed significantly to offer fewer, more artisanal choices.

McCray said the limited menu, which only includes two salads, three pizzas, one pasta dish and an ice cream sundae for dessert, will be expanded over time.

Pizzas will also taste quite different.

“Everything we’re making is from scratch now — our sauces, our dough,” McCray said. The pizzas will also be cooked in a new, state-of-the art stone oven.

More changes are also still on the way for the restaurant, McCray said, with work underway on an expansion into a former nail salon next door.

The new space will increase the square footage by about 25%, McCray said, and it’s an area that will be available for extra tables or private events.

McCray said even if the restaurant is changing and seeking to attract a different kind of crowd during the day, it won’t stop offering nighttime favorites such as trivia, live music and karaoke.

“We’re hoping to bring in a fresh, new clientele early in the day,” McCray said. “We’re still an entertainment-driven location."