PODCASTING: Crow facts will amaze in podcast on science 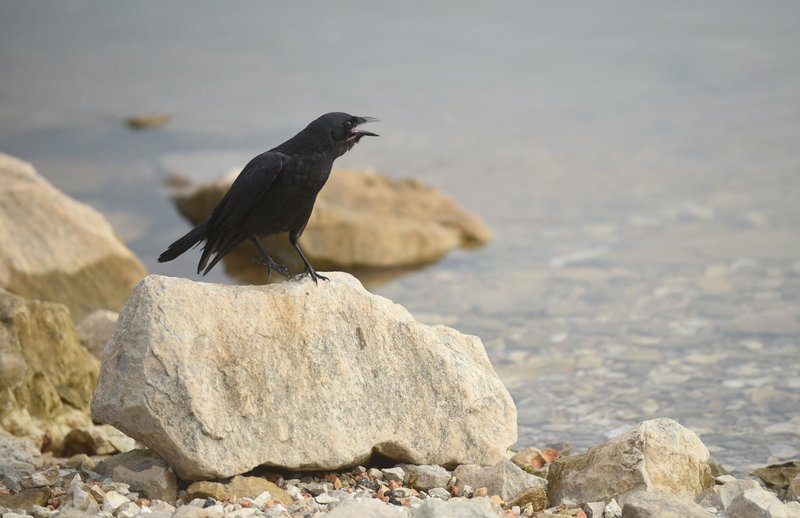 A crow calls out from the shore of Beaver Lake near the Arkansas 12 bridge before picking up morsels of food near the water. The photo was taken in September, but that crow might remember the photographer if their paths crossed today, according to a new episode of NPR's Short Wave. (Photo by Flip Putthoff, NWA Democrat-Gazette)

At the long gone Rogers Junior High School in El Dorado in the 1970s, I had two male teachers in one year — pretty unusual at the time. A very knowledgeable Syrian-American taught us American history with a thick accent. Half the fun was deciphering his lessons, but he knew his subject. Another teacher, a swaggering young American and no doubt a former frat boy, taught science.

That class was notable in that the school had gotten a new science curriculum and we would get to put together these cute little plastic cars and outfit them with batteries that we would somehow make. It was fun, but I remember being disappointed that they didn't go faster and farther and that we weren't allowed to play with them for very long. The class, I recall, usually just descended into mayhem. And it seemed to last forever.

Amazingly, the experience didn't turn me off of science completely. I am not a climate change denier, for example. I believe scientists over politicians.

I believe that science can be fun again, thanks to a newly discovered podcast from NPR called Short Wave. Unlike that class so many years ago, each episode of the podcast is 10 minutes or less and filled with fun facts, so they are perfect listening for short commutes in town.

For this review, I listened to an episode from Oct. 28, "Crows Don't Forget." I'd always heard these critters were smart, but listening to the very enthusiastic Kaeli Swift, whose Ph.D. project for the University of Washington was all about the birds, I have a new appreciation for them.

Among the revelations: Crows never forget a face, so if you harm one, you'd best watch your back for the next several years.

If a crow discovers another one dead, it will put out an alarm call, and all the crows who hear will gather in a tree near their dead comrade and loudly cry for a few minutes. That's called a crow funeral.

New Caledonian Crows, a specific type, are known for making and using tools to get what they want. The little geniuses make hooks from twigs to fish out bugs from holes in trees.

What I learned: Be very nice and respectful when a crow is watching. A crow will cut you, maybe with a knife it made.

Other intriguing episode titles are "Life After Whale Death," "Fighting an Insect Invasion With an Insect Invasion," "The Zombies That Walk Among Us" and — my favorite title — "Exploring the Rainforest With Treetop Barbie." Maddie Sofia hosts.

Another podcast I tested this week is called Hollywood Crime Scene, with hosts Desi Jedeikin and Rachel Fisher. I would rather anger a crow than listen to another installment after hearing Episode 115 from Oct. 28: "Movie vs. Reality: The Town That Dreaded Sundown and Texarkana Moonlight Murders."

Arkansans of a certain age will recall this 1976 movie, which gave our state a rare Hollywood spotlight. It was based on killings in 1940s Texarkana that were attributed to a Phantom Killer who first terrorized kids on lovers' lane.

Who knows what material Jedeikin and Fisher used in their research, but the Texarkana Gazette is mentioned more than once. No sources are cited, and it sounds as though Jedeikin is reading from her source material. Fisher mostly acts surprised.

The podcast is loaded with "likes" and f-bombs, Valley Girl-style. Ten minutes in, they finally talk about where Texarkana is located.

Jedeikin: "Now this area is kind of post-war suburb area, Texarkana. It's actually, like, in a weird location. It's right in the corner of four states — Oklahoma, Louisiana, Texas and Arkansas. But this town is actually 50-50 on the border of Texas and Arkansas."

Fisher: "Is that why they call it Texarkana?"

Jedeikin: "Yeah, that's the name. So it's kind of like Tahoe, where it's like, where's it's like, that hotel that's half in Nevada and half in California, have you been to that in Lake Tahoe?"

The second season of The City, hosted by Robert Amer, dropped Oct. 28. The podcast that put Chicago under the spotlight last year takes on Reno, Nev., this go-round, with show notes describing it like this: "True stories about how power works in urban America. We investigate people in power, the consequences their actions have for a city's most vulnerable residents, and what a power struggle in one city reveals about the challenges facing all cities."

In Reno, it so happens, city powers-that-be came up with a plan to force strip clubs out of downtown, meeting big resistance from the strip clubs' head honcho.

Guess who's caught in the middle? The little people — dancers who depend on the clubs for income.

Derby City Betrayal became available Nov. 4. It looks back at March 2017, when Louisville, Ky., was horrified to learn that teens in the Metro Police Department's Youth Explorer program were accusing a handful of officers of sexually abusing them. What's more, they were said to have filmed the abuse.

The four-part podcast from Fox News' Investigative Unit is only available on Apple Podcasts.

Reader recommendation: Mike Pullam dropped us an email to share his favorite podcast. "Mike Rowe, The Way I Heard It. He's the new Paul Harvey."

Share your favorite podcast or let us know if you are an Arkansan who has a podcast by writing to jmcleod@arkansasonline.com.