DACA should cease, legal or not, court told; UA has 34 students in program 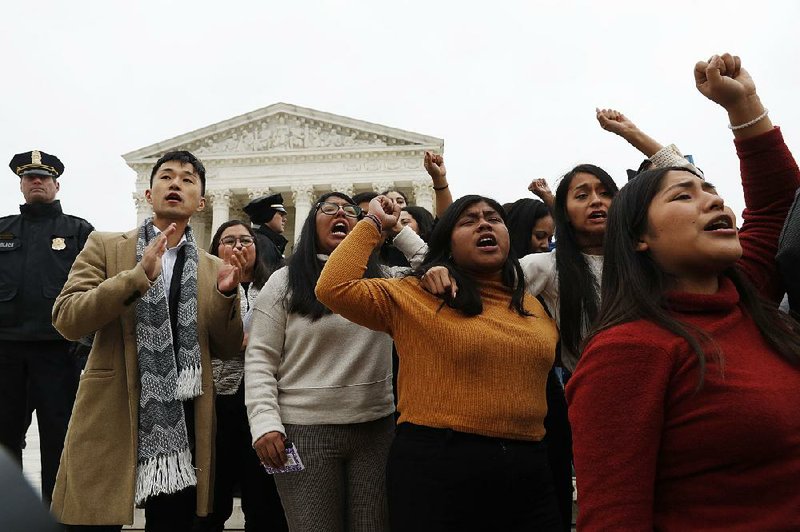 Recipients of the Deferred Action for Childhood Arrivals program leave the Supreme Court building after oral arguments were heard Tuesday on a challenge to the Trump administration’s efforts to end the program. More photos at arkansasonline.com/1113court/

WASHINGTON -- The Trump administration told the Supreme Court on Tuesday that it has decided that the program that shields from deportation young migrants brought to the United States as children should end regardless of its legality, and there would be no point in asking it again to come up with additional justifications.

"We own this," Solicitor General Noel Francisco told the court during a more than 80-minute oral argument over the Deferred Action for Childhood Arrivals program, which President Barack Obama authorized through executive action in 2012 to protect law-abiding people who were brought to the United States as children and are now in the country illegally.

Nearly 700,000 people are enrolled in the program, which provides a renewable grant of protection from deportation and carries with it work authorization. But Francisco said the Department of Homeland Security disagrees with providing such a large classification of people with immunity from laws that usually would demand their removal.

Lower courts have said that President Donald Trump's decision in 2017 to terminate the program was based on a faulty belief that the program was legally and constitutionally defective and that the administration has failed to provide reasons for ending it that courts and the public can judge.

[Video not showing up above? Click here to watch » https://www.youtube.com/watch?v=mS2qHSSAUVo]

Francisco disputed that. While the first memo outlining termination of the program relied exclusively on the view that the program was illegal, he said, a subsequent agenda memo invited by a judge during the litigation supplied other reasons. There would be no point in requiring the administration to repeat that step, he said.

In Arkansas, a friend-of-the-court brief filed on behalf of the University of Arkansas, Fayetteville and 164 other institutions of higher education asked the Supreme Court to affirm the lower court rulings blocking Trump from ending the program.

The Oct. 4 court filing states that the DACA program "provides hard-working and passionate young individuals" assurance that they can attend college without fear of deportation.

The students "play a significant role in fostering the inclusive and diverse on-campus atmosphere we strive to create," the brief states.

Mark Rushing, a UA spokesman, said the campus has 34 students, including two graduate students, in the program.

"Chancellor [Joe] Steinmetz, along with other university and college leaders, favors supporting DACA students and applauds bipartisan state legislation that passed earlier this year that supports Arkansas DACA students. Providing education for these students is good for the state," Rushing said in an email.

The state law, Act 844 of 2019, allows public colleges and universities to classify the recipients as in-state students if they have earned diplomas in Arkansas and lived in the state for at least three years. In-state tuition rates are less expensive than are out-of-state rates.

Nate Hinkel, a UA System spokesman, said only UA-Fayetteville had signed on to be represented in the friend-of-the-court brief.

Separately, 44 educational organizations -- including the American Association of State Colleges and Universities -- filed a brief asking the Supreme Court to affirm the lower court rulings. The Arkansas State University System, Arkansas Tech University, the University of Central Arkansas and some members of the UA System are among the members of the state colleges association.

Ahead of the arguments Tuesday, Trump said on Twitter that DACA recipients shouldn't despair if the justices side with him, pledging that "a deal will be made with the Dems for them to stay!"

The president also said in his tweet that many program participants are "far from 'angels,'" and he claimed that "some are very tough, hardened criminals." The program bars anyone with a felony conviction from participating in it, and serious misdemeanors may also bar eligibility.

Some DACA recipients, commonly known as "Dreamers," were in the courtroom for the arguments, and many people camped out in front of the court for days for a chance at some of the few seats available to hear the arguments. The term comes from never-passed proposals in Congress called the DREAM Act.

Trump has said it is necessary for the Supreme Court to agree with the administration's view to get congressional Democrats back to the negotiating table to come up with a more permanent solution.

The court's decision is likely to take months.

At one point, Trump told the so-called Dreamers that "they were safe under him," she told Francisco. Then, abruptly, the administration said it would be ending the program in a short time, giving them "six months to destroy your lives."

Other liberal justices also wondered whether the government has more of a responsibility to say why it was ending a program that, according to dozens of briefs in the case, universities, cities, employers and the recipients themselves have come to rely on.

But Francisco said even Obama described the program as a temporary, "stopgap" measure. Recipients must reapply every two years, he said, or the benefits expire on their own.

Washington lawyer Theodore Olson, arguing on behalf of a coalition of businesses, civil-rights groups, universities and individuals, said DACA was different from most programs, because the government "invited them into the program." Olson, a former solicitor general under President George W. Bush, said the recipients have identified themselves and made their deportations easier.

Chief Justice John Roberts said deportation was unlikely -- the government wouldn't have the resources to undertake such a mass action. The real issue, he said, was work authorization.

The Trump administration moved to scuttle the DACA program in 2017 after Texas and other states threatened to sue to force its end. Then-Attorney General Jeff Sessions advised the Department of Homeland Security that the program was probably unlawful and that it could not be defended.

Sessions based that decision on a ruling by the U.S. Court of Appeals for the 5th Circuit, which said another Obama program protecting migrants was beyond the president's constitutional powers. The Supreme Court deadlocked 4-4 in 2016 when considering the issue.

Olson said advice from Sessions gave the department no other option but to end the program. The court should require the administration to start over and give reasoned arguments for why it is in the country's best interests to end the program.

But Justice Neil Gorsuch, who said the "sympathetic facts" about DACA recipients "speak to all of us," wondered what would be the point. "What more would you have the government say?" he asked Olson.

But Justices Elena Kagan and Ruth Bader Ginsburg said a presumption about the program's illegality provides the backdrop for all of the administration's actions.

Lower courts have rejected Sessions' view. They have kept the program in place, restricting new applicants but allowing those already enrolled to renew their participation. California Attorney General Xavier Becerra, who is among those fighting the administration's decision, said that about 400,000 two-year renewals have been approved since January 2018.

The program is open to those who were brought to the United States before they were 16, have lived here at least five years, paid for and received background checks, and have clean legal records. The program does not provide a path to citizenship, but does allow recipients to work legally, and renew their two-year protections from deportation.

A government study found more than 90% of recipients, who now are in their 20s and 30s, are employed, and about half are students.

The consolidated cases that the court heard Tuesday are Department of Homeland Security v. Regents of the University of California, Trump v. NAACP and McAleenan v. Vidal.

Information for this article was contributed by Robert Barnes of The Washington Post; by Mark Sherman of The Associated Press; and by Jaime Adame of the Arkansas Democrat-Gazette.

Print Headline: DACA should cease, legal or not, court told; UA has 34 students in program