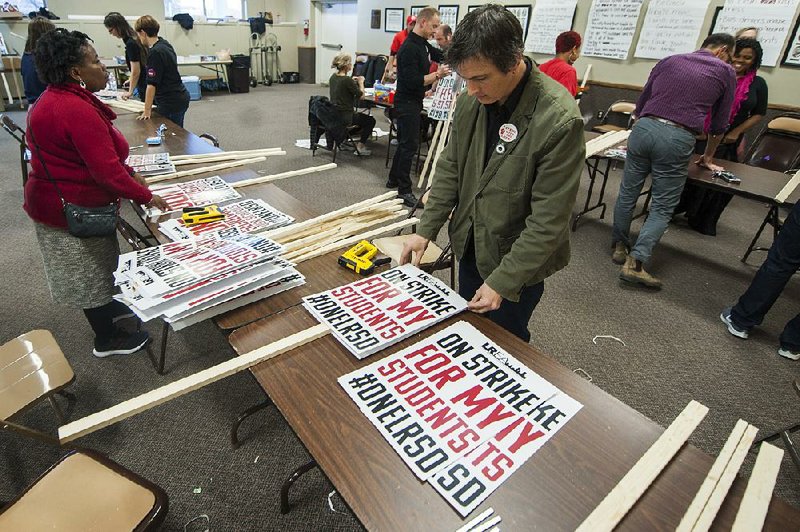 [THURSDAY UPDATES: Keep up with the latest news on the teacher strike » arkansasonline.com/teacherstrike/]

Little Rock School District teachers and support staff members, including nearly 1,800 Little Rock Education Association employee union members, will be on strike and on picket lines today -- a day in which schools in the state's second-largest system will be open as usual to students and nonstriking workers.

It will be the district's first teacher strike in 32 years, and the first strike in which all campuses in the state-controlled Little Rock district will remain open to students.

That included a Pulaski County Circuit Court hearing, statements to employees from the superintendent and state education commissioner, an assembly of picket signs by the soon-to-be strikers and parents scrambling to decide where their children will spend today.

Teresa Knaap Gordon, president of the employee association, announced Monday the plan for today's one-day work stoppage, which comes on the same day as the monthly 10 a.m. meeting of the Arkansas Board of Education.

The Education Board last month stripped the association, effective Oct. 31, of its collective bargaining rights at the same meeting in which it approved a plan calling for the reestablishment in November 2020 of a Little Rock School Board. However, that board would be limited in its authority as long as the district is classified by the state as a system in "Level 5 -- in need of intensive support" because of poor academic achievement at some campuses.

The Education Board is to discuss today a draft memorandum of understanding that would spell out the School Board limits.

Gordon said Wednesday, as she said earlier this week, that the employees she represents want the state to release the 23,000-student district from five years of state authority.

"I would like for them to return local control to our district or at least put forth a plan that returns full local control to a board that has full decision-making authority," Gordon said, adding that as it stands now the state has "no intention" of releasing the system as long as it is at Level 5 of the state's accountability system. "That's arbitrary," she said, "because they get to decide if we are in Level 5."

• Arkansas Education Secretary Johnny Key issued a statement expressing the state's appreciation of Little Rock educators' expertise -- as evidenced by raises awarded them earlier in the school year -- and encouraging them "to show their commitment to their students by arriving to school [today] ready to teach." He also assured parents that schools will be open today and "learning will occur."

• Pulaski County Circuit Judge Wendell Griffen in an emergency hearing directed the Little Rock district leaders to make publicly available its "Work Stoppage Responsibilities Plan," after Ross Noland, a Little Rock attorney and school system parent, requested but was denied information on how the district would adequately staff and otherwise safely operate its schools during the strike.

• Little Rock Superintendent Mike Poore sent a letter -- attached to district policies on teacher absences and responses to frequently asked questions -- in which he noted that the strike comes at a time when public input is still being taken in regard to the state's draft memorandum, and he urged that employees not intimidate or shame one another for the strike choices they make.

• A total of 61 Central High School faculty members issued their own strongly worded letter saying they will "never allow our city to once again be torn apart by the segregationist policies of those who hold political power" and calling for the reinstatement of the Little Rock School Board that was removed in 2015, return of collective bargaining and a raise for support staff members.

Striking employees -- who have invited parents, students and community members to join with them -- will picket at the 41 campuses from 7 a.m. to 9:30 a.m. today.

The strikers will move to the Arch Ford Education Building on the state Capitol Mall for a rally from 11 a.m. to noon, at which time they will march to the front steps of the Capitol building for another rally. Speakers at that rally will include Gordon, Arkansas Education Association President Carol Fleming and state Sen. Joyce Elliott D-Little Rock.

Gordon and a few dozen others worked Tuesday and Wednesday evenings to assemble signs that state "Don't Segregate Our Schools #OneLRSD," and "One strike for my students #OneLRSD."

The union president, who is on leave from her job as a librarian media specialist at Jefferson Elementary, said the state "keeps changing the target" for release of the district and "expecting us to meet it."

"It's frustrating," she said.

Gordon said there have been conversations between her and Poore about district matters but not on the issues leading to the strike.

"He doesn't have the power to make the changes that need to be made," she said. "The state board, the commissioner and the governor have that power."

Any conversations with them?

Noland had submitted requests this week to the school district for information about the district's plans for adequately staffing and otherwise safely operating the district in anticipation of the strike.

After the district had denied much of his request, citing a state statute -- Arkansas Code Annotated 6-15-1304 -- that exempts school safety and emergency plans from public disclosure, Nolan on Tuesday sought an "emergency in-camera review" of the document by a judge.

Griffen held that hearing Wednesday. Little Rock school system attorneys Chris Heller and Khayyam Eddings provided Griffen with a copy of the plan, which the judge reviewed before questioning Randy Rutherford, the district's executive director of secondary education, about it.

In response to some of Griffen's questions, Rutherford said the plan contains names of Little Rock district administrators and Arkansas Department of Education staff members who could serve as substitutes at the schools, but that information is changeable.

Griffen questioned whether the work and job assignments described in the district's work stoppage plan differ from the ordinary functions of a school or "minding the education store."

The plan does not address placement of security personnel in a building or anything other than routine teaching functions, Griffen said. He then asked whether the work stoppage plan was an actual emergency or school safety plan as envisioned by the statute that allows exemptions from public disclosure.

The fact that the work stoppage plan was prepared in response to the extraordinary situation of a work stoppage does not make it an emergency or an unsafe situation, Griffen said. Extraordinary means it's just not routine, he said, declaring that the plan -- with some redactions -- was disclosable to the public.

Those redactions would apply to any planned responses to threats of harm to health and safety.

Noland said Wednesday night after reviewing the work stoppage plan that it does provide more information than was previously available to parents, but not all the information that he had hoped for. Missing, he said, are details regarding the vetting of the most recently hired substitute teachers and the potential for disciplining or dismissal of teachers who do strike.

"There are some informative charts and assignments for central office staff and what schools they will be going to," he noted. "There is information showing that [the Little Rock district has] access to the substitute teacher pool for the entirety of Pulaski County."

Noland, whose child will not go to school today because of Noland's lack of comfort with the staffing and his support for teachers, said he will follow up with the district about his requests about the background checks on substitutes hired at a late October job fair.

"This is a win for public disclosure and for school district parents being able to understand what is going on with their teachers and their schools," Noland said. "The Arkansas Freedom of Information Act is an important tool, and exemptions to it should only be asserted when they are absolutely applicable."

In his letter to employees, Poore on Wednesday acknowledged that employees would be grappling with a decision to go to work today -- especially when many members did not realize a strike vote had occurred, he wrote.

"As a result of this job action being thrust upon us, we must rely on District policy, the staff handbook ... and common decency.

"One thing that I hope we can all agree on is that we have all worked hard to create a caring, inclusive learning and work environment," Poore wrote.

"Actions to intimidate should not be tolerated by any of us. Shaming any individual for the choice he or she makes is offensive and does not align with our school district culture."

Poore attached questions and answers about the strike and its impact, including notice that striking individuals will not be paid for the days not worked and the strike days will not be made up at the end of the year. The district is suspending all vacations, as well as personal and professional leave during a strike.

The responses to questions also state that only substitute teachers who have completed state-mandated background checks will replace teachers who do not report to work.

The district referred to the union any questions about whether union members will be fined if they don't strike. Gordon said Wednesday that the association does not penalize its members for that.

The Education Board's agenda calls for addressing matters related to the Little Rock School District at the end of an otherwise lengthy agenda. The Little Rock district-related matters include:

• Proposal to add two additional at large members to the district's seven-member Community Advisory Board, which advises Key on personnel and policy decisions he makes in his role as the school board for the state-controlled system.

• Review of the process to establish new school board member election zones in the district to conform with the Education Board's decision that there should be nine School Board members in the district instead of the previous seven members of the board.

• Consideration of the terms in a draft memorandum of understanding on the operation of the district for as long as it remains in Level 5 -- in need of intensive support.

• School attendance zone changes necessary in light of the opening of the new Southwest High School and closure or consolidation of other schools throughout the district starting in the 2020-21 school year. 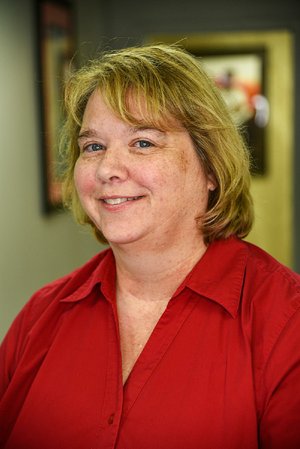 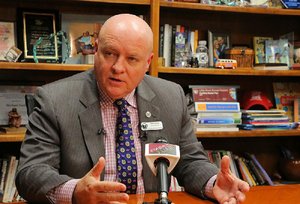