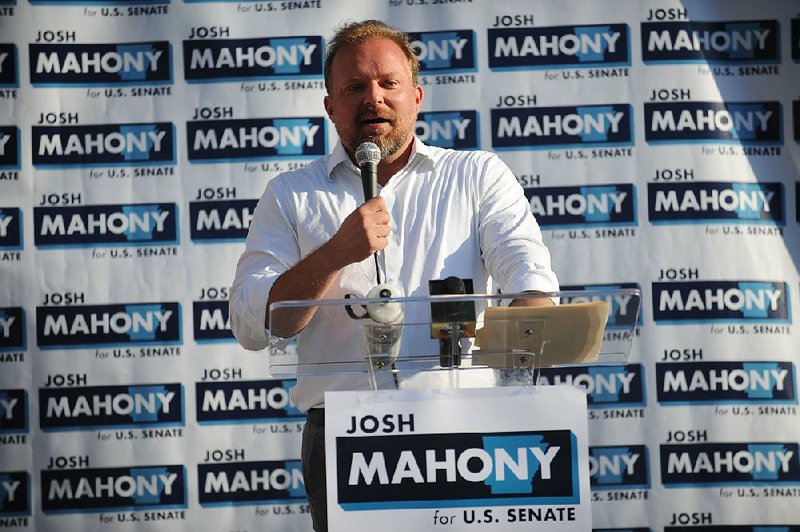 The unexpected withdrawal of Arkansas Democrats' only challenger to U.S. Sen. Tom Cotton earlier this week has left the party scrambling to find a replacement candidate, and Republicans threatening to file a lawsuit if they do.

In a fax to Secretary of State John Thurston dated Wednesday but filed Thursday, Fayetteville Democrat Josh Mahony formally ended his campaign but provided no reason for the decision.

"I am writing to formally withdraw my candidacy for United States Senate for Arkansas in the election year of 2020 and would like to be removed from the ballot," he wrote. "Thank you, Joshua Mahony."

The abrupt decision to exit the race came just a week after he filed paperwork to enter the race and take on the incumbent Republican senator, and mere hours after the deadline had passed on Tuesday for another Democrat to do the same.

In a statement posted on social media Tuesday afternoon, Mahony cited "family health concerns" as the reason behind his decision.

Since then, party leaders say they've heard little else from Mahony, who appeared to have deleted his campaign Twitter and Facebook pages on Thursday afternoon.

Mahony's departure came roughly an hour and a half after the Republican Party of Arkansas had accused Mahony of misrepresenting his employment status on Federal Election Commission filings.

Mahony had also missed deadlines earlier this year for filing federally mandated financial disclosure paperwork. The document, once submitted, had been flawed; Mahony refiled it five times after errors and omissions were spotted.

Mahony had sold his stake in one of his family's businesses more than a year before entering the race.

State Democratic Party Chairman Michael John Gray learned about Mahony's letter to the secretary of state late Thursday afternoon, when a reporter from the Arkansas Democrat-Gazette called to ask him about it.

Asked whether Mahony had consulted with party officials before sending it, Gray said, "Not that I'm aware of. Certainly not with me and no one at party headquarters has told me they've talked to him."

The chairman said he hadn't spoken with Mahony or attempted to reach him other than a brief phone call Tuesday afternoon.

"The factors that caused this are obviously deeply personal," he said. "I think that's got to be our first concern is his health and well-being. I think the people that gave money, the people that supported him ... at some point deserve a full airing, but right now, I would always be careful to say somebody owes something."

While Gray urged caution and concern for the Mahony family, he also stated in a news release that he along with party staff members and legal counsel were reviewing "all possible avenues" toward replacing Mahony on the ballot.

"Arkansans were promised a choice this election, and we are working to ensure they have that choice," Gray said in the news release. "We know there are questions, and are working to get the clear and correct answers."

But Mahony's letter to the secretary of state's office could complicate those efforts, a former Democratic Party attorney said.

About an hour after Gray's statement was released, the state Republican Party responded with its own statement suggesting that any move to file a new challenger to Cotton would be illegal.

"News reports suggest that the Democrat Party is scrambling to falsify the reason for Josh's withdrawal in an attempt to unlawfully put another candidate on the ballot," said the statement by GOP spokesman Stephen Houserman. "Should this happen, the Republican Party of Arkansas will take aggressive legal action against all parties involved to defend the rule of law."

Under Arkansas Code 7-7-106, political parties can fill a vacancy if a person "running unopposed in a preferential primary" dies or "notifies the party that he or she will not accept the nomination due to a serious illness."

The Democratic Party's attorney, Annie Depper, could not be reached for comment.

"If he writes [a letter] to the secretary of state that says he's withdrawing due to his health ... then the party can select a replacement nominee," Burks said.

However, it must be "a signed statement, not a press release," and it must indicate that the illness is "serious," Burks added.

Mahony did not return a phone call seeking comment, but sent an email Thursday acknowledging he had received the message and confirming that he had submitted what he called a "letter of resignation" to the secretary of state.

In a return email, the Democrat-Gazette asked him what the illness is, who has it, whether it's serious and whether he believes the party, under the law, is entitled to replace him on the ballot.

He did not respond before deadline.

As Democratic Party leaders worked to assemble a response to Mahony's exit, other Democrats couched their concerns for Mahony's family with a desire for a fuller explanation.

"I don't know anybody that does" know more, said state Rep. Nicole Clowney, D-Fayetteville. "That's been a source of frustration for some people."

Others pointed to the need for information to determine if Mahony's explanation of a "family health concern" comports with the law's requirements for replacing a candidate.

"I'm annoyed that I don't know what that is," said Rep. Vivian Flowers, D-Pine Bluff.

"I hope that whatever the issue is, that it's OK," Flowers said, before adding, "I think I deserve to know as a Democrat what happened and why."

Clowney, like other Democrats who spoke to the Democrat-Gazette, said she had not spoken to Mahony since he exited the race, though she noted that he had left her a voicemail apologizing for the decision.

"If he has a family health problem, there's no reason he needs to apologize to me," Clowney said.

"Because this is a United States Senate candidacy, it's newsworthy, it's not an invasion of privacy," Burks said. "Not just Democrats but all of the voting Arkansans ... deserve to know that and have it clarified as quickly as possible."

Meanwhile, Gray said party officials are still reviewing other aspects of Mahony's decision, such as whether the $12,000 filing fee Mahony paid to secure a place on the ballot will be returned to him.