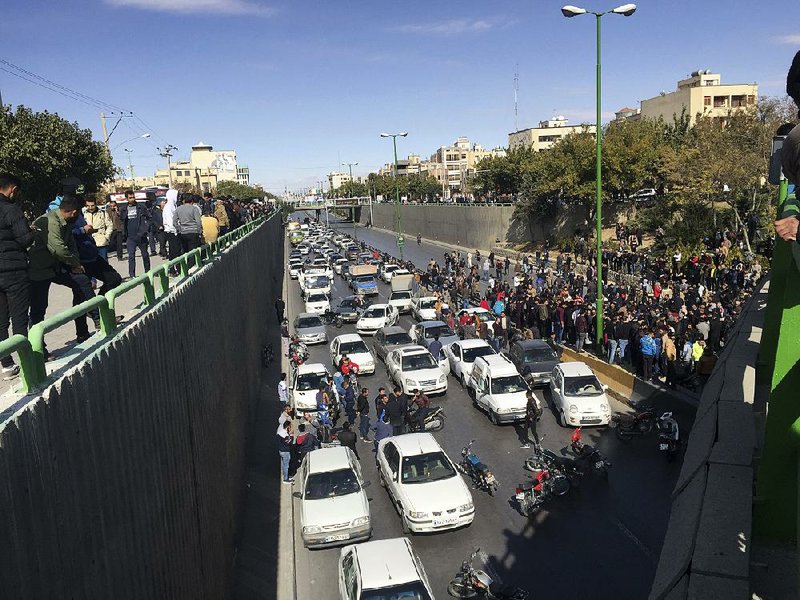 Cars block a street Saturday in Isfahan, Iran, during one of several protests in Iranian cities over the government’s 50% increase in gasoline prices. More photos at arkansasonline.com/1117iran/

DUBAI, United Arab Emirates -- Protesters angered by the 50% rise in government-set gasoline prices blocked traffic in major Iranian cities and occasionally clashed with police Saturday after a night of demonstrations punctuated by gunfire, in violence that reportedly killed at least one person.

The protests put renewed pressure on Iran's government as it struggles to overcome the U.S. sanctions strangling the country after President Donald Trump unilaterally withdrew America from Tehran's nuclear deal with world powers.

Though largely peaceful, demonstrations devolved into violence in several instances, with online videos purporting to show police officers firing tear gas at protesters and mobs setting fires. While representing a political risk for President Hassan Rouhani ahead of February parliamentary elections, it also shows the widespread anger among Iran's 80 million people who have seen their savings evaporate as jobs grow scarce and the national rial currency collapses.

The demonstrations took place in more than a dozen cities in the hours after Rouhani's decision at midnight Thursday to cut gasoline subsidies to fund handouts for Iran's poor. Gasoline in the country still remains among the cheapest in the world, with the new prices jumping to a minimum of about 50 cents a gallon -- 50% up from the day before.

[Video not showing up above? Click here to watch » https://www.youtube.com/watch?v=IQSx2HxsPrI]

But in a nation where many get by as informal taxi drivers, cheap gasoline is considered a birthright. Iran is home to the world's fourth-largest crude oil reserves. While expected for months, the decision still caught many by surprise and sparked immediate demonstrations.

Violence broke out Friday night in Sirjan, a city some 500 miles southeast of Tehran. The state-run IRNA news agency said "protesters tried to set fire to the oil depot, but they were stopped by police." It did not elaborate, but online videos circulating on Iranian social media sites purported to show a fire at the depot as sirens wailed in the background. Another showed a large crowd shouting: "Rouhani, shame on you! Leave the country alone!"

"They insisted on reaching the oil depot and creating crises," Mahmoudabadi said.

In Iran's oil-rich Khuzestan province, online videos purported to show police firing tear gas at crowds. There also was gunfire in the province's city of Khorramshahr, as could be heard in a brief clip played on the air by state television.

The region has long been a political tinderbox, with its ethnic Arab population that feels disenfranchised from the country's Persian-language majority.

On Saturday morning, the start of the Iranian workweek, protesters stopped cars on major roadways across the capital, Tehran. Peaceful protesters blocked traffic on Tehran's Imam Ali Highway, calling for police to join them as the season's first snow fell, according to online videos. A dump truck later dropped bricks on the roadway to cheers.

A large crowd in the city of Kermanshah demonstrated and later drew tear-gas fire from police, a video showed. Others clashed in Tabriz, another major city. The online videos corresponded to Associated Press reporting on the protest.

It wasn't immediately clear if police made arrests. Iranian state television aired a segment Friday night trying to dispute the claims of opposition satellite news channels about the protests, calling their videos of demonstrations "fake news" in English. Demonstrators in many online videos Saturday began identifying the time and place in response.

There were disruptions and blackouts Friday night into Saturday of Iranian internet access, suggesting "a response to limit attendance and media coverage of the protests," according to the group NetBlocks, which monitors worldwide internet access.

Protester chants mirrored many from the late 2017 economic protests, which resulted in nearly 5,000 reported arrests and at least 25 people killed. Some criticized Iran's spending abroad on Palestinians and others while the country's people remain poor. Protests meanwhile continue in Iraq and Lebanon, two Mideast nations home to Iranian proxies and crucial to Tehran's influence abroad.

Iraq ordered two of its biggest border crossings closed to travelers -- though not to goods -- along its southern frontier with Iran. It did so at Tehran's request, the Iraqi Border Ports Commission said in a text message.

Iran has suffered economic problems since its 1979 Islamic Revolution cut off its decades-long relationship with the U.S. Its eight-year war with Iraq in the 1980s followed, further straining its economy.

The collapse of the nuclear deal has exacerbated those problems. The Iranian rial, which traded at 32,000 to $1 at the time of the accord, fell to 122,600 to $1 in trading Saturday. Iran has since begun breaking terms of the deal as it tries to force Europe to come up with a way to allow it to sell crude oil abroad despite American sanctions.

The International Monetary Fund forecasts that Iran's government deficit will widen as a percentage of gross domestic product, from 2.7% in 2018 to 4.5% this year and 5.1% in 2020. The oil price Iran needs to balance its budget will more than double over the same period, as U.S. sanctions curb sales of the country's most important export, according to the IMF.

Henry Rome, an analyst at the Eurasia Group, said that after mass protests, Rouhani was forced to back down from a 2017 plan to increase fuel prices by 50%.

"The government was clearly attuned to this risk: The latest announcement was made in the middle of the night before a weekend," Rome said. "It took effect immediately, and it was announced without direct consultation with lawmakers."

Iran's Supreme Economic Council, a body comprising Rouhani, the head of the judiciary and the leader of the parliament, met Saturday in response to anger at the fuel-price increase. The parliament plans to debate a bill today to reverse the price increase and effectively nullify the decision, Ali Asghar Yousefnejad, a lawmaker and member of the parliamentary executive board, told IRNA in an interview.

It's unclear whether parliamentary votes can overrule rulings by the Supreme Economic Council. The last time Iran introduced fuel rationing was in 2007 during hard-line President Mahmoud Ahmadinejad's second term. That prompted protests at gas stations and some were even set on fire. Rouhani's government ended the policy in 2015.

Information for this article was contribute by Jon Gambrell of The Associated Press and by Abeer Abu Omar and Khalid Al-Ansary of Bloomberg News.