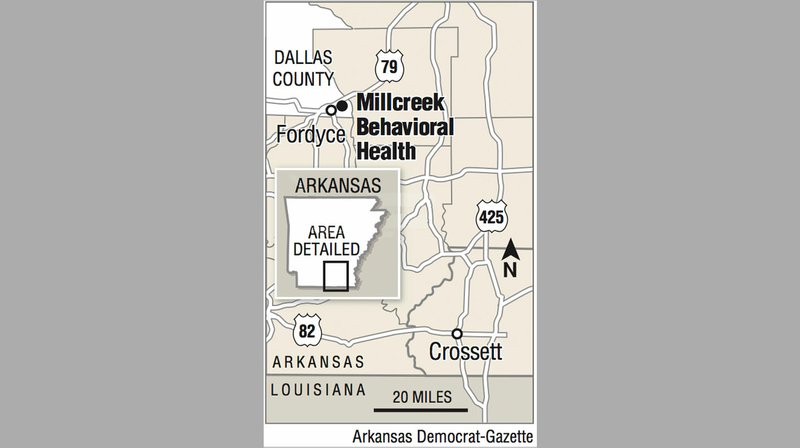 A map showing the location of Millcreek Behavioral Health

A psychiatric treatment center for children in Fordyce has been accused of negligence leading to youth-on-youth sexual assaults, according to a lawsuit in U.S. District Court in Pine Bluff.

A couple filed a lawsuit against Millcreek Behavioral Health of Fordyce, saying their 7-year-old daughter was digitally raped multiple times in August 2018 by her roommate while at the center. Attorney Jered Medlock filed the lawsuit on the couple's behalf in March.

Millcreek is operated by Acadia Healthcare of Franklin, Tenn., a for-profit company that operates five more mental health treatment facilities for children and adults in Arkansas and hundreds across the United States.

Accusations of lax oversight that allows sex among young patients have also been lodged by a watchdog group against an Acadia treatment center in Fayetteville. State officials are investigating those complaints.

In court filings, lawyers for Millcreek Behavioral Health, also known as Habilitation Center LLC, denied the allegations in Ryan and Michelle Eagles' lawsuit, including the sexual assaults involving their daughter.

The lawsuit asks for the company to pay the daughter's medical bills that occurred as a result of the assaults and other punitive and exemplary damages "so as to prevent Habilitation Center LLC, Acadia and others from this type of behavior in the future."

This is Medlock's second lawsuit against Acadia-owned facilities in Arkansas. The first, filed by Kimberly Lopez in Sebastian County Circuit Court in 2016, included allegations that a 17-year-old girl was raped by a male patient, who was also a minor.

The male patient stayed across the hall from the girl in March of that year, and the lawsuit argued that Valley Behavioral Health System was negligent in its protection of the girl.

The lawsuit was resolved in August 2018, Medlock said. Terms were not disclosed.

In an emailed response, Gretchen Hommrich, a director of investor relations for Acadia, denied the lawsuits' allegations and said the incidents in question had been reported to the state and the children's guardians. She added that regarding the Eagles' lawsuit, the allegations were investigated and weren't substantiated.

"Unfortunately, despite clinically appropriate policies and procedures and careful monitoring of our residents, isolated incidents do occur," Hommrich wrote in the company's statement.

The residential treatment facilities have "multiple policies ensuring appropriate training of employees and staffing of care units," she continued.

"Ensuring that we maintain a consistently safe, therapeutic, and compassionate care environment for all patients is and always will remain the top priority for our treatment facilities," the statement read.

Last Sunday, the Arkansas Democrat-Gazette reported that Piney Ridge Treatment Center of Fayetteville, another Acadia Healthcare facility, is under state investigation over allegations that include sexual contact among children residing there.

Disability Rights Arkansas, a federally authorized monitor of the treatment of people with disabilities, sent an Oct. 2 letter to the Department of Human Services that alleged 14 issues at the facility, including dirty conditions, disrepair and inadequate supervision for mentally ill children there.

The Disability Rights group alleged that the lack of supervision at Piney Ridge led to youth-on-youth sexual contact -- both "consensual" and "forced."

A separate nonprofit that performs inspections for the state confirmed many of Disability Rights' findings.

The CEO of Piney Ridge responded in a letter to the newspaper that staff members supervise children constantly, including standing outside their bedrooms at night. The rooms house one to six children, according to the letter by Adrienne Catalina.

The Eagles initially sued Millcreek Behavioral Health in state court in Dallas County on Feb. 11. The lawsuit moved to federal court March 18, where it is before U.S. District Judge James Moody Jr.

Millcreek, which is licensed for 61 beds, provides long-term residential treatment for youths ages 6-17 who have intellectual or developmental disabilities.

A child treated there "must experience significant deficits in the abilities to learn, take proper care of oneself and communicate with others effectively," the facility's website says. They also "have challenges with socialization, self-direction, mobility and living independently."

The Eagles' lawsuit alleges that Millcreek staff members should have known before the assaults started, on Aug. 25, 2018, that the girl's roommate "had serious mental health issues that prevented her from being an unsupervised member of society."

The alleged assaults were "only investigated as a result of the bad actor's braggadocia through the milieu and to other patients," according to an amended complaint filed in August.

"Defendant Acadia knew, by virtue of other assaults and rapes across their ... facilities that these types of assaults are likely to occur, yet they continue to be less than diligent in their protection of their patients," the Eagles' lawsuit alleges.

The lawsuit says Millcreek's negligence involves housing children likely to commit assaults in the same area with others, including the same bedroom; failing to instruct workers on how to supervise residents; and understaffing.

Medlock said that even after the girl reported the assaults to staff members, they left her in the same room with her assailant for 24 nights.

"It's just egregious," he said. "These are avoidable circumstances, so I'm really glad that we did decide to take this one."

Acadia Healthcare Inc. is a publicly held, multinational behavioral health care operator with 595 facilities in 40 states, the United Kingdom and Puerto Rico, according to the company's website.

Facility staffers are among those required by state law to report instances of child maltreatment to state police, but if sex acts between children are deemed consensual, the call will be screened out, said Bill Sadler, a state police spokesman.

Millcreek and Piney Ridge are classified as Psychiatric Residential Treatment Facilities that are paid by Medicaid to treat eligible children and youths under age 21, according to Department of Human Services officials interviewed by the newspaper.

The Arkansas Foundation for Medical Care, which inspects facilities for the Human Services Department, visited in October and also found allegations of sexual contact among children and a facility "in extreme disrepair and very dirty."

Piney Ridge has "work it needs to do to improve its facility," said Human Services Department spokeswoman Amy Webb. The agency is monitoring the work. The state's options range from a correction action plan to license revocation.

Millcreek has also been the subject of several complaint investigations by the Human Services Department, according to documents the newspaper obtained through open records requests.

Those investigations, which include documents from 2014 to this year, found that the Millcreek staff did not report to state officials instances of serious physical injury. Center staff members told state investigators that they only report cases of serious injury if the use of restraints contributed to the injury.

The documents also show instances of injury from use of restraints, including breaking a 9-year-old's arm in 2014.

The facility staff reported the breaking of the child's arm to the Arkansas State Police's child abuse hot line. The state followed up to make sure those issues were resolved, documents show.

Disability Rights and the Foundation for Medical Care also found instances of excessive use of physical and chemical restraints at Piney Ridge. Catalina said in her response that all use of restraints complies with federal and state laws.