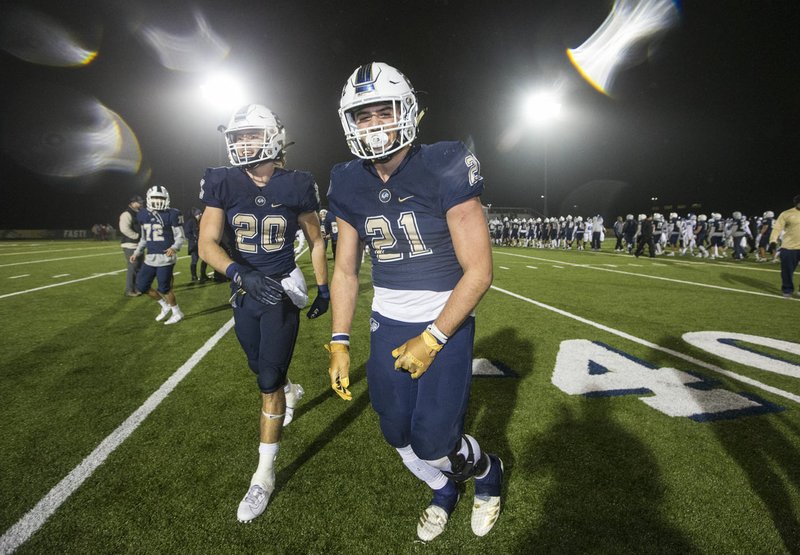 CENTERTON -- Bentonville West was in trouble after Conway scored three consecutive touchdowns to take a lead entering the fourth quarter.

That's when the Wolverines went back to work.

Bentonville West scored on consecutive possessions in the fourth quarter and defeated Conway 31-21 Friday in the second round of the Class 7A state playoffs at Wolverine Stadium.

Bentonville West took a 24-21 lead when Dalton McDonald connected with Brandon Humes on a touchdown pass over the middle with 9 minutes, 35 seconds left in the game. West made a defensive stop and Nick Whitlatch put the Wolverines ahead 31-21 with a 65-yard burst up the middle with 5:18 left to play.

"We've got some playoff shirts that says 'Finish the Fight' and that's what we did," Bentonville West coach Bryan Pratt said. "We could've very easily quit the fight -- we took a blow there in the third quarter -- but we battled back and did what we were supposed to do."

Bentonville West (7-4) advances to face Bryant next week in the state semifinals. The game is a rematch from Sept. 13 when No. 1 Bryant defeated the Wolverines 38-0.

"We've got a tough road ahead this week but, hey, we're one of four teams left," Pratt said.

Trey Travis kicked a 22-yard field goal followed by 1-yard touchdown runs from Nick Whitlatch and Jonas Higson to give Bentonville West a 17-0 lead after one quarter. Higson's run came after Stephen Dyson recovered a fumble on the kickoff by Conway.

Conway (8-4) got to within 17-14 at halftime following two mistakes by Bentonville West. Dalton McDonald overthrew an intended receiver and Riley White intercepted at the 42 for Bentonville West. Conway quarterback Nick McCuin then connected with Shane Smith for a 26-yard touchdown for the Wampus Cats' first score of the game.

A roughing the kicker penalty kept a Conway possession alive and Manny Smith scored on a 20-yard run to cut the Bentonville West lead to 17-14 at halftime.

• Conway was called for a personal foul penalty on a short-yardage play near midfield to give Bentonville West a first down.

• Bentonville West was called for roughing the punter, which led to a Conway touchdown in the second quarter.

• Pratt received the water cooler treatment while he was talking to his players after the game.