Young eager to return for Ohio St. vs. Penn St. 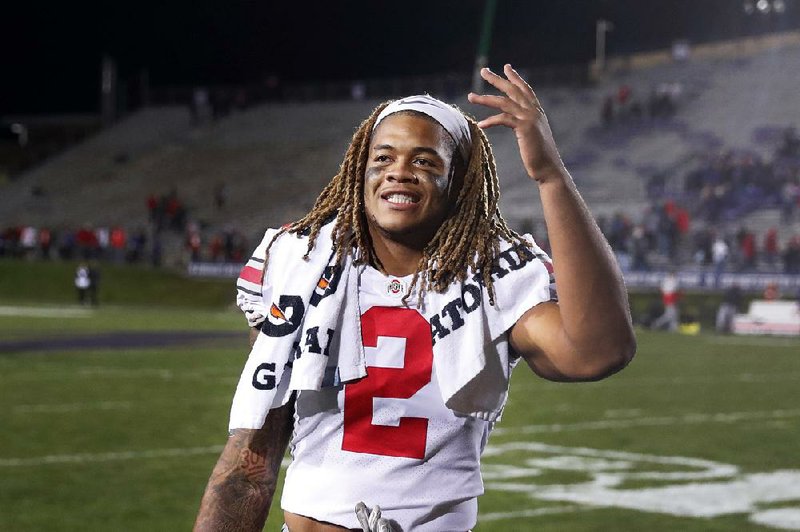 Ohio State defensive end Chase Young returns from a two-game suspension today for the second-ranked Buckeyes against No. 8 Penn State. Before his suspension, Young had amassed 13 1/2 sacks and was being talked about as a Heisman Trophy candidate.

COLUMBUS, Ohio -- Chase Young, Ohio State's star defensive end and team captain, was sidelined by the NCAA for the last two games for breaking the rules by accepting a personal loan from someone he described as a family friend.

He wasn't made available to reporters this week, but Young's coaches and teammates say he's burning to get back.

Before being suspended for Ohio State blowouts of Maryland and Rutgers, Young had amassed 13½ sacks and was being talked about as a Heisman Trophy candidate after a four-sack performance in a 38-7 victory over Wisconsin.

Penn State quarterback Sean Clifford calls Young a "game wrecker," and Hafley explained why as the two teams prepare for a showdown with both Big Ten title and playoff implications.

The Buckeyes can wrap up the Big Ten East Division with a win. If Penn State, an 18-point underdog, can pull off the upset, it can win the division by defeating Rutgers next week. The Buckeyes would consider a loss devastating to what they see as a special season, and it could shake up the top of the College Football Playoff rankings. Ohio State expects the biggest test of the season this week against the Nittany Lions and next week against No. 13 Michigan.

Penn State Coach James Franklin has not addressed the status of wide receiver KJ Hamler this week. Hamler has been dinged up all season with various undisclosed issues. He left last week's game in the first half and did not return. Hamler has caught a team-high 46 passes for 791 yards and 8 TDs this season. He saw limited action in practice this week.

Clifford said he deleted his social media accounts after getting death threats after Penn State's first loss of the season, against Minnesota Nov. 9.

"It's kind of sad to say, but you know how some fans get a little crazy," he said. "I was kind of sick and tired of getting death threats and some pretty explicit and pretty tough-to-read messages."

He has since returned to the grid, reactivating a couple of his accounts.

"You learn how to deal with certain things and how certain people are going to react because it's a very passionate game with a lot of passionate people," he said.

Franklin had trouble processing it.

"I don't know where we are as a society," Franklin said. "It's concerning. We're 9-1, we're ranked in the top 10. We've had a pretty good year based on most people's standards and sometimes you go on social media and you wouldn't feel that way."