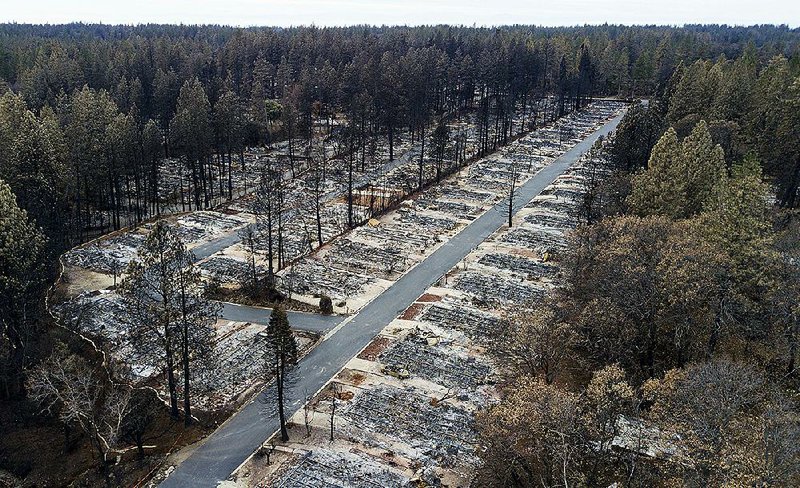 This Dec. 3, 2018, photo shows the remnants of homes in the Ridgewood Mobile Home Park retirement community in Paradise, Calif., after the Camp Fire wildfire devastated the area.

Lori Kennedy thought she was going to live a comfortable retirement in a modest home in wooded Magalia, Calif.

But she woke up a year ago to a phone call and hurried evacuation orders, and in a matter of hours nearly every trace of her life was incinerated: the Christmas ornaments her children made when they were little, the sculptures and artwork she spent her career creating, the home where she hosted family gatherings for more than two decades.

"It's not just that you've lost things. You've lost validation of your existence for all those years," Kennedy said. "You can replace furniture. But you can't replace baby books, wedding albums."

Kennedy is one of thousands of survivors of the Camp fire, the deadliest wildfire in California history, which was sparked by Pacific Gas & Electric equipment in November 2018 and killed 85 people and nearly incinerated the town of Paradise. More than 70,000 people have filed claims against the utility over wildfires in recent years.

Attorneys believe as many as 100,000 people are eligible to receive payments for damages they suffered during the devastating wildfires of recent years.

But wildfire victims of previous years must wait for Pacific Gas & Electric to exit bankruptcy to get any payout from the utility. And as the 2019 wildfire season takes another toll on Northern California and the utility's equipment is blamed for new fires, the number of homes destroyed ticks up. More victims are filing claims against the company, potentially reducing the payout all victims and creditors could receive.

"The more victims there are, the smaller the slices of the pie. That's just the way it's going to be," said Hugh Ray, a bankruptcy attorney and principal at the law firm McKool Smith.

Recovery has been particularly hard for survivors of the 2018 fire because many in their safety nets also lost everything. Christina Taft, who lived with her mother before the fire, said she's relying on charity after the fire killed her mother and destroyed the home they shared.

"I'm still trying to get a job and I still have stuff in storage and I'm not economically stable," Taft said.

"They're not going to get anything like a complete recovery," Ray said. "It won't be anything like enough to solve all the problems. At this point I don't see the money."

Complicating matters, debts that Pacific Gas & Electric incurred after the company filed for bankruptcy protection are supposed to be treated as a higher priority than those incurred before bankruptcy, experts said. Without a bankruptcy law that enables companies to continue operating after filing, no one would be willing to lend to the company or provide equipment, for fear of not getting paid.

That means victims of blazes such as the one last month in Sonoma County that destroyed 374 structures and forced 200,000 people to evacuate are supposed to be paid before victims of earlier fires.

"It doesn't make sense to me. You'd think it would be based on what's oldest, and obviously the Paradise fire was the most destructive," Taft said. "It's very unfair."

Attorneys for wildfire victims -- many who represent victims of blazes before and after the bankruptcy filing -- are trying to change that.

Gerald Singleton, who represents approximately 7,000 wildfire victims, said claims from last month's fire should be passed through to the reorganized company and handled by its insurance, as if they're not part of the bankruptcy. That would allow those victims time to file claims without delaying Pacific Gas & Electric's bankruptcy, which faces a June legislative deadline to access a $21 billion state wildfire fund.

"It's not going to be fair to [those] victims, because they would have to file within a very short period of time," he said.

In Kennedy's case, she and her husband grabbed a few photos and their cats as they fled. They spent the next 110 days moving from one hotel to the next as they figured out how to rebuild. An insurance settlement covered the value of her home and its contents, but it wasn't enough to buy again in the area, where home prices were skyrocketing. She and her husband eventually bought a fixer-upper that needed extensive work while her husband undergoes dialysis treatments three times a week.

"I feel cheated, of course. Everyone considered their loss as a great loss, and that it shouldn't be diminished, but I also know reality," Kennedy said. "You can kick and scream all you want, but it's just going to happen the way it's going to happen."

Some wildfire victims didn't have insurance or received insurance payouts that were too small to afford anything in the area.

"There are people who have ongoing mental or emotional issues, and they can't get comfortable anywhere, because they fear getting burned out again," said Mike Danko, another attorney who represents wildfire victims.

Continued fires also threatened the bankruptcy plans. Each of the competing proposals gives financial backers an out under certain conditions. For example, if Pacific Gas & Electric-sparked fires burn down 500 houses this year, the backers of those plans can withdraw, Danko said.

Pacific Gas & Electric said it's too soon to discuss liability for the Sonoma County fire, for which a cause has not been determined.

"Everything they thought that they had worked out is now being challenged, because the numbers are now being stressed," said Risa Wolf-Smith, a bankruptcy attorney and partner at Holland & Hart, which represents an entity from which Pacific Gas & Electric promised to buy renewable energy.

An eventual payout from Pacific Gas & Electric still wouldn't come close to replacing everything Kennedy lost. One of her animals didn't survive boarding. Her best friend, who survived the fire, later died after a heart attack. A close friend left California after receiving a small insurance settlement, and her community has been erased from the map.

"I keep hoping that as time passes it will soften, it will blur the edges," Kennedy said. "I think we all are trying to move forward. It's just been extremely challenging."

Print Headline: California fire victims forced to back of line