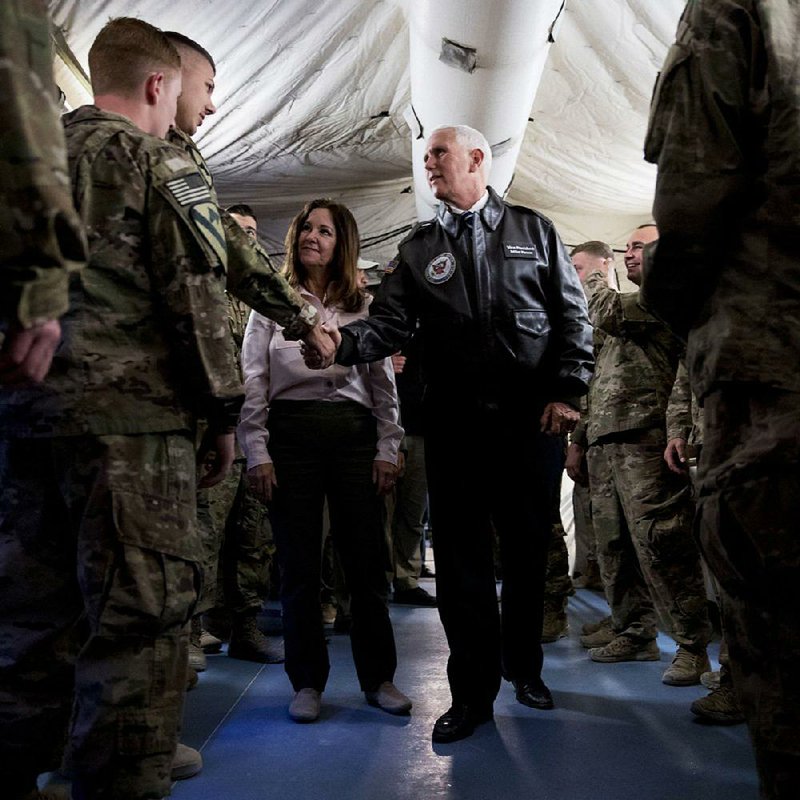 Flying in a C-17 military cargo aircraft, Pence landed in Irbil, capital of Iraq's semiautonomous Kurdish region in a visit meant to hearten the United States' regional partners in the fight against the Islamic State group after the U.S. pulled troops from northern Syria, leaving America's Kurdish allies there to face a cross-border Turkish assault last month.

Asked by reporters if the United States was facing a sense of betrayal from Iraqi and Syrian Kurdish allies over Trump's actions in Syria, Pence said both groups, including Syrian Kurdish forces "who fought alongside us," had no doubts about the U.S. commitment to them. "It's unchanging," Pence said.

Earlier, Pence received a classified briefing at Iraq's Al-Asad Air Base, from which U.S. forces are believed to have commenced the operation in Syria last month that resulted in the death of Islamic State leader Abu Bakr al-Baghdadi. Pence also spoke by phone with Iraqi Prime Minister Adel Abdul-Mahdi.

Underscoring Pence's message that American military partnership with Syrian Kurdish forces is ongoing, the U.S.-led coalition said Saturday that its forces, along with hundreds of Syrian Kurdish commandos, had jointly carried out the largest operation against the Islamic State in eastern Syria since the U.S. pullback began in early October.

Friday's operation in southeastern Syria's Deir el-Zour province captured dozens of Islamic State militants, cleared enemy compounds and seized weapons and explosives, the U.S.-led coalition said. Operations against Islamic State militants in Syria had been disrupted, but not totally halted, because of the U.S. troop reduction and Turkey's invasion.

Pence's trip Saturday was his second to the region in five weeks. Trump deployed him on a whirlwind journey to Ankara, Turkey, last month to negotiate a cease-fire after President Recep Tayyip Erdogan seized on the U.S. withdrawal to open the offensive on U.S.-allied Kurdish fighters in northern Syria. Trump's move had sparked some of the most unified criticism of his administration to date, as lawmakers in both parties accused Trump of forsaking longtime Kurdish allies and inviting Russia and Iran to hold even greater sway in the volatile region.

When the U.S. forces withdrew, Syria's Kurds -- seeking protection from their No. 1 enemy, Turkey -- invited Syrian government and Russian forces into parts of northeastern Syria where they had not set foot in years. More are now deploying along large parts of the border region under a Russian-Turkish deal, including to at least one former U.S. garrison in northern Syria.

The Ankara agreement required Syrian Kurds to vacate territory in Syria along the Turkish border in an arrangement that largely solidified Turkey's position and aims.

Pence hailed the cease-fire as the way to end the bloodshed caused by Turkey's invasion.

But Syrian-led Kurdish forces say the cease-fire is persistently violated. Fighting raged Saturday between them and Turkey-backed forces outside the Syrian town of Ein Issa, once home to U.S. bases and the Kurdish administration.

A senior Syrian Kurdish official was critical Saturday of Washington's lack of response to Turkey's violations of the cease-fire.

Limiting the U.S. partnership to military cooperation over a limited area with the Syrian Kurdish fighters, "while condoning the killing of civilians, is not a very honest relationship and cooperation," the official, Ilham Ahmed, said.

After declaring the near-complete withdrawal of U.S. forces from Syria, Trump decided that roughly 800 U.S. military personnel would stay to keep eastern Syria's oil fields from falling back into the hands of the Islamic State.

Trump also agreed to keep about 150 U.S. troops at a base in southern Syria as a check on Iranian influence in the region.

While Trump has claimed that the U.S. is now "keeping" the oil in Syria, Pentagon officials indicated the U.S. presence is not intended to improve the oil infrastructure but to keep it in the hands of the Kurdish-led Syrian Democratic Forces.

Pence, joined on the trip by his wife, Karen Pence, also greeted U.S. troops ahead of the Thanksgiving holiday, serving turkey and accompaniments to hundreds of troops at the two locations.

"While you come from the rest of us, you're the best of us," Pence told service members in a dusty hangar at Al-Asad.

He said the Trump administration is working to secure another pay increase for the armed services and suggested the ongoing impeachment inquiry in Washington was slowing the way.

"Partisan politics and endless investigations have slowed things down in D.C.," Pence said.

Speaking at Irbil Air Base, Pence praised the efforts of American troops and their allies in defeating the Islamic State but did not mention the Iraqi military by name, though thousands of its personnel gave their lives.

Pence also made no distinction between the Kurds in Syria who fought long, grueling battles against the Islamic State group over the past two years, and those he was visiting in Iraqi Kurdistan, who also played a role but were not involved in the same level of combat.

"The American people will also never forget or fail to honor the service and sacrifice of the brave Kurdish fighters who stood shoulder to shoulder with us in the fight against ISIS," he said, using an acronym for the Islamic State group.

After visiting with the troops, the vice president flew to Irbil, where he met with the leaders of the Kurdistan region: President Nechirvan Barzani and his cousin, Prime Minister Masrour Barzani.

Pence told the Kurdish leaders that it was a "great honor" to visit and praised the "enduring bond that exists between the Kurdish people and the people of the United States."

"I also welcome the opportunity on behalf of President Donald Trump to reiterate the strong bonds forged in the fires of war between the people of the United States and the Kurdish people across this region," the vice president said.

Pence's visit to Iraq comes as the country has been plagued by widespread anti-corruption protests. At least 342 protesters have been killed and thousands have been wounded since the unrest began on Oct. 1.

Pence spoke by phone with Abdul-Mahdi after the Iraqi leader declined an invitation to meet with Pence at the air base when security concerns prevented Pence from traveling into Baghdad.

Pence told reporters that he and Abdul-Mahdi had discussed the protests during their phone conversation and that the Iraqi prime minister told him that "they were working to avoid the violence, or the kind of oppression that we see taking place."

Pence in turn told Abdul-Mahdi to "listen to those who are protesting in their calls for reforms," he said.

Fighting in Baghdad picked up in the late afternoon and again in the evening Saturday, where Iraqi security forces fired rubber bullets and tear gas to disperse crowds of protesters, killing two people in a third day of fierce clashes in central Baghdad, security and hospital officials said.

Two protesters were struck with rubber bullets and died instantly and more than 20 others were wounded in the fighting on Rasheed Street, a famous avenue known for its old crumbling architecture and now littered with rubble from days of violence.

Sixteen people have died and more than 100 have been wounded in the renewed clashes. The officials spoke on condition of anonymity in line with regulations.

Protesters have occupied part of three bridges -- Ahrar, Jumhuriya and Sinak -- in a standoff with security forces. The bridges lead to the fortified Green Zone, the seat of Iraq's government.

Information for this article was contributed by Zeke Miller, Samya Kullab, Sarah El Deeb and Murtada Faraj of The Associated Press; by Alissa J. Rubin and Falih Hassan of The New York Times; and by Miriam Berger of The Washington Post. 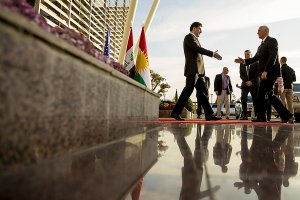 Photo by AP/ANDREW HARNIK
Iraqi Kurdistan President Nechirvan Barzani (left) greets Vice President Mike Pence in Irbil on Saturday. Pence said it was a “great honor” to visit and praised the “enduring bond” the U.S. shares with the Kurds. 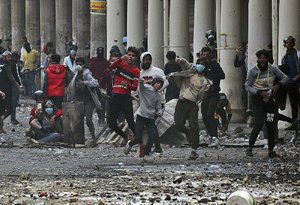