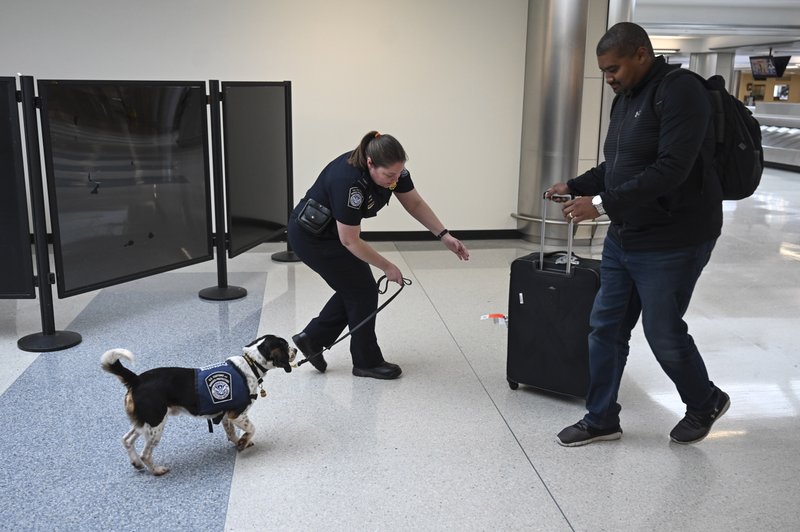 DULLES, Va. -- Phillip has a preference for small handbags. Larger bags may yield bigger loads of contraband, but he doesn't care. For him, it all pays the same. A single dog treat.

Wearing a dark blue vest that says "Protecting American Agriculture" above the U.S. Department of Homeland Security logo, he becomes alert. The subject is, at first, oblivious. She has her roller bag and her shoulder bag as she ambles toward the exit.

Phillip's partner, U.S. Customs and Border Protection K-9 officer Valerie Woo, moves in. From that shoulder bag comes a ham sandwich secured in plastic wrap, which Woo says was a snack on an Air China flight arriving at Dulles International Airport from Beijing. It is the first of three ham sandwiches that Phillip and fellow canine Beazley find from that flight alone. Phillip also sniffs out two apples and two oranges.

Prohibited items include meats, fresh fruits and vegetables, plants, seeds, soil and products made from animal or plant materials, with the details predicated on a traveler's embarkation point. But it is the pork that is most troubling right now.

African swine fever is estimated to have killed a quarter of the world's pork population, including half of China's swine herd, the world's biggest. The virus has invaded more than 40 countries to date. The disease has spread to Vietnam, Laos, Cambodia, North Korea and the Philippines. It has been reported in Romania, Poland, Bulgaria and other Eastern European countries, and in September it was found near Saint-Leger in Belgium.

There is no cure and no vaccine, and while the virus is not dangerous for humans, American pork producers and the U.S. Department of Agriculture are worried it will reach North American soil.

This is the most challenging time of the year, said Steve Sapp, Mid-Atlantic region spokesman for U.S. Customs and Border Protection. International travelers pour in from abroad bearing foodstuffs as gifts or as holiday fare -- for instance, a family member's famous siu mai dumplings or the crispy rice cakes with pork floss that a family enjoyed while vacationing in Vietnam. Food is central to the holidays, and experts say human travel is the most likely vector for the disease.

Phillip and Beazley have found pests such as the mango weevil and pink hibiscus mealybug and diseases such as the citrus canker. The dogs are trained to identify five things: apples, mangos, citrus, beef and pork. But right now, the bulk of their olfactory attentions are paid to pork. The USDA is in the process of ramping up its canine presence, adding 60 beagle teams -- for a total of 179 -- to expand screenings of incoming international flights, commercial ports, seaports and cargo planes.

Why beagles? They are friendly, nonthreatening, smart and have great noses. Also, Woo said, they are exceedingly food-motivated. There are larger dog breeds patrolling for U.S. currency and firearms, different dogs that sniff out narcotics, and still others that look for bombs. Teams at the airport tend to be beagles or beagle mixes, animals plucked from shelters and rescues around the country to get a second chance.

"We could look at 100 dogs and not come back with any," said Kathleen Warfield, training specialist at the National Detector Dog Training Center in Georgia. "And once they go through initial testing, the percentage of those dogs that make it is maybe 70%. We want searching to be their main priority."

The dogs start slowly with progressive training, all positive reinforcement with treats and a clicker, moving from boxes either empty or containing illicit food items to more complicated luggage with zippers and multiple compartments. A dog and human partner train for 10 weeks, learning each other and practicing.

African swine fever can live for months on infected meat or cold cuts, on tainted feed or on animal feed additives. For example, if it arrived stateside via a ham sandwich: That sandwich could be tossed in a dumpster or by the side of the road and one of the country's 5 million wild hogs could eat it, contracting the virus. That virus could then travel via soft tick to domesticated hogs.

An infection on American soil would likely halt all U.S. pork exports, according to the USDA. That sector totaled $6.39 billion in sales in 2018.

Phillip trails a woman with an orange reusable grocery bag slung over one shoulder. He sits on alert, looking up at Woo, his human partner. It's a false alarm, the bag having previously contained another ham sandwich, with residual scent molecules detectable only by the beagle's keen snout.

Woo and fellow K-9 officer Jennifer Jones' job is location and confiscation. All confiscated food products are destroyed either in the "Muffin Monster" disposal on-site at the airport or via a contract incinerator. They write up "Significant Agricultural Incident Reports," with fruit frequently hacked on a weathered cutting board and samples sent off to a lab in plastic vials for examination by entomologists and plant pathologists. If they determine someone has taken steps to conceal prohibited food items, then they issue fines of $500.

The two officers are able to list the most likely contraband depending on the flights' country of origin. They frequently see pigeon and goat from Egypt; chicharron from Colombia; doro wat and quanta, a kind of beef jerky, from Ethiopia.

Michael Litwin, the K-9 supervisor at Dulles, said each airport keeps careful records of the dogs' successes and failures. The dogs are not allowed to eat the evidence. And sometimes they make mistakes, like the beagle that became overly enamored of French perfume in luggage.

"They are federal officers, but animals first," Litwin said.