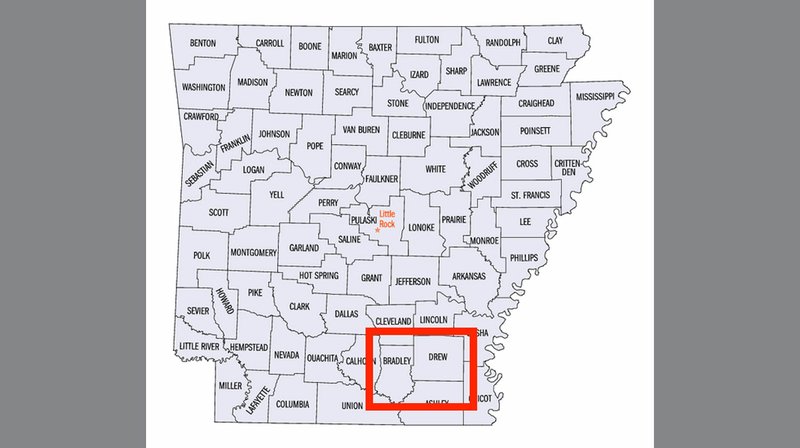 This map shows the location of Drew and Bradley Counties in Arkansas.

Officials in two southeast Arkansas counties this month voted to waive competitive bidding on a project to build a first-of-its-kind private jail in the state, clearing one of the final hurdles in the plan that has lingered for years.

Together, the two counties will take up just a fraction of the bed space in the jail to house their own offenders. The majority of the beds will instead be filled with prisoners from the Arkansas Department of Corrections, which is poised to contract separately with the counties to hold offenders from its crowded prisons.

Both the counties and the state stand to gain significant savings by outsourcing the housing of inmates to the for-profit operator.

The most recent price quoted to Drew County by LaSalle, $32.44 per inmate per day, is about half what the county currently spends to hold inmates at its jail in Monticello.

The project, however, has drawn the concern of a range of entities from prison-reform advocates who have protested the use of for-profit prisons to local leaders who have questioned the location of the proposed jail.

In addition, the vote by Drew County leaders on Monday was necessitated after it was determined that the Quorum Court had likely skirted state competitive bidding laws in approving an earlier version of the deal.

The 8-0 vote Monday by the Drew County Quorum Court, with one member absent, was enough to pass the two-thirds threshold needed to waive competitive bidding on the project, according to documents of the meeting provided by Drew County Attorney C.C. “Cliff” Gibson.

Gibson and several members of the Quorum Court present at Monday’s meeting said Bradley County had already approved its end of the deal at a Quorum Court meeting the previous week. The Arkansas Democrat-Gazette was unable to determine the vote count in Bradley County.

County Judge Klay McKinney, Bradley County’s chief executive, has not responded to numerous messages left at his office over the past month.

Robert Akin, the Drew County executive, also did not respond to phone calls on Wednesday. Gibson, the county attorney, said Akin has yet to sign either the contract with LaSalle or the Department of Corrections, and is planning to hold a signing “ceremony” to do so.

Meanwhile, LaSalle has yet to pick a location in Drew or Bradley county for the jail.

“Obviously, they’re delighted with the progress, and they will be working with [the Department of Corrections] on the next steps,” said Jon Gilmore, a lobbyist for La-Salle, in an email this week.

At a Drew County Quorum Court meeting last month, two members expressed concern that the jail would be built in Bradley County, taking local tax dollars and jobs with it. Drew County is expected to contribute more than three times Bradley County’s share of the daily costs of the jail, in order to hold more prisoners.

One of the Quorum Court members who raised earlier concerns, Tommy Gray, said Wednesday that he was persuaded to support LaSalle after getting more information about the company and reading drafts of the jail contracts.

The county judges “know just about everything except for the location,” he said.

Gray and another justice of the peace, Carole Bulloch, said they also were swayed by District Judge Bruce Anderson, who told the Quorum Court on Monday night that he is constrained from locking people up for misdemeanor offenses, such as on failure-to-appear warrants, because of a lack of space at the Drew County jail.

“The jail has been full, it’s full right now,” Anderson said, according to footage from the meeting posted to Monticello Live.

The Drew County jail, which has about 40 beds, held 47 people Tuesday evening, according to the online jail roster.

Under a draft version of the contract between the counties and LaSalle, the company would agree to set aside 45 beds a day for Drew County inmates, and 12 for Bradley County, though more beds could be used by either county if they are available.

The draft contract also specifies that the roughly 500 inmates coming from state prisons must be lower-security prisoners who do not have a history of violence or escape attempts over the previous five years.

The guards at the regional jail will get a week’s worth of training, which is the state standard for local jails. Guards at state prisons are required to undergo six weeks of training.

Officers at the regional jail also will earn a lower starting salary than officers at state prisons.

While no private adult lockups currently operate in Arkansas, the Department of Corrections does contract to hold about 325 prisoners just over the state line at a LaSalle-run jail in Texarkana, Texas, which several Arkansas officials have described as run-down.

Arkansas prison officials have said that they plan to transfer those inmates from the Texas facility to the regional jail in southeast Arkansas once it opens.

The Drew County jail, which has about 40 beds, held 47 people Tuesday evening, according to the online jail roster.