Hogs have plenty of legacies playing 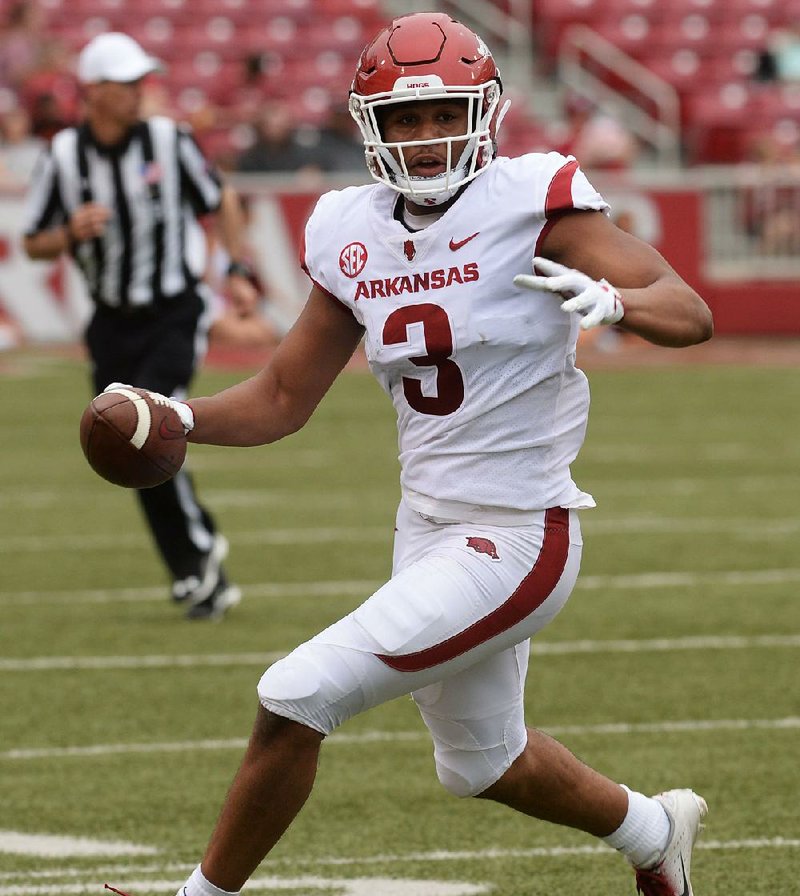 Wide receiver Koilan Jackson (above) is one of 12 Arkansas players carrying on a family tradition of playing football for the Razorbacks. Some current players are the second, third, fourth or fifth member of their family to play sports at the university. ( NWA Democrat-Gazette / Andy Shupe)

FAYETTEVILLE -- Families will gather this week to carry out traditions that in some cases have been handed down for generations.

For many members of the University of Arkansas football team, family tradition extends to the field.

Here is a look at the 12 Arkansas football players who are legacies, and the relatives who played for the Razorbacks before them:

Eli Hale: His uncle, Ryan Hale, was a defensive lineman from 1995-98 and was a senior captain.

Hayden and Hudson Henry: Their father, Mark Henry, was an offensive lineman from 1988-91 and was All-Southwest Conference as a senior. Their brother, Hunter Henry, was a tight end from 2013-15, and as a junior was All-American and won the Mackey Award as the nation’s best player at his position.

Koilan Jackson: His older brother, Keith Jackson Jr., was a defensive lineman from 2003-06 and a senior captain. His father, Keith Jackson Sr., is associated with the Razorbacks by serving as the team’s radio color analyst for 17 seasons from 2000-16.

John Stephen Jones: His grandfather, Jerry Jones, was a co-captain on the Razorbacks’ 1964 national championship team and lettered as an offensive lineman from 1962-64. His father, Stephen Jones, lettered as a linebacker from 1984-87.

Jack Lindsey: His grandfather, Jim Lindsey, lettered for the Razorbacks from 1963-65 as a wingback and was a captain as a senior. His father, Lyndy Lindsey, lettered as a tight end from 1988-91. His uncle, Zak Clark, was a quarterback from 2000-01.

Grant Morgan: His brother, Drew Morgan, lettered as a receiver from 2013-16.

*Cheyenne O’Grady: His late father, Larry Marks, lettered three seasons for Arkansas’ basketball team beginning in 1987-88 and ending with the 1989-90 team that played in the Final Four.

Mataio Soli: His father, Junior Soli, lettered as a defensive lineman from 1992-95 and was All-SEC as a senior.

Zach Williams: His father, Rickey Williams, lettered as a linebacker from 1984-87 and as a senior captain was All-Southwest Conference.

*O’Grady, a senior tight end, “mutually agreed” to leave the team after eight games this season, according to since-fired Arkansas coach Chad Morris.

There are at least a dozen legacy players at Arkansas this year -- the second -- and in some cases the third, fourth or fifth -- member of their family to play sports for the Razorbacks, primarily football.

The deep connection between this year's team and Razorbacks teams of the past was displayed in the final drive of Arkansas' game at LSU on Saturday when quarterback Jack Lindsey threw passes intended for John David White, Hudson Henry and Koilan Jackson.

"And my mom and aunts, they were all Diamond Dolls for the baseball team," White said. "I never thought it would feel this special, but when you start living it out, you realize that you're living something special."

In many cases, teammates this year have relatives who played together. Stephen Jones and Rickey Williams -- the fathers of John Stephen Jones and Zach Williams -- entered the UA together in 1984 and were teammates for four seasons. The same was true for Lyndy Lindsey and Mark Henry -- the fathers of Jack Lindsey and brothers Hayden and Hudson Henry -- beginning in 1988.

Jim Lindsey and Jerry Jones were teammates for two seasons, including 1964 when the Razorbacks won the national championship. Their sons missed playing together by a year, but their grandsons are now quarterbacks together.

Keith Jackson Jr. and John Aaron Rees were teammates for two seasons, including 2006 when the Razorbacks last won an SEC West championship. Jackson's brother, Koilan, is a receiver along with Rees' nephew, White.

Drew Morgan and Hunter Henry were in the same signing class in 2013 and played together for three seasons at Arkansas. Their younger brothers, Grant Morgan and Hayden Henry, are junior linebackers on this year's team.

"That's been one of the coolest things," White said, "just to learn that there's more than I thought that have legacies here."

Arkansas rosters seem to always include some sort of legacy connection to the program's past, but this year's roster -- with the addition of freshmen White, Williams, Hudson Henry and Mataio Soli -- has more ties than any in recent memory.

Even interim Coach Barry Lunney Jr. was a legacy player at Arkansas in the 1990s. His grandfather, John Lunney, lettered in the late 1940s.

Barry Lunney arrived at Arkansas in 1992 as part of a freshman class that included Junior Soli. The four-year teammates helped the Razorbacks to their first SEC West championship in 1995, and their relationship led to Lunney recruiting Mataio Soli, Junior's son, more than two decades later.

"I think Coach Lunney hit my dad up, just checking on him and asking him how everything has been," Soli said. "That's how I ended up learning about Coach Lunney, and that's when my dad found out Coach Lunney was working here. That's what led to him recruiting me."

For Soli, who grew up in Georgia, coming to his father's alma mater was not a foregone decision. He had several scholarship offers and considered playing elsewhere, including Florida and Auburn.

But for many of the other legacy players, playing at Arkansas is the realization of a lifelong dream. White grew up attending games in Fayetteville and Little Rock, and chose to walk on for the Razorbacks over scholarship offers from Air Force and multiple schools at the FCS level.

"When it came down to it, I couldn't pass up this opportunity," White said. "It was too big of an opportunity to better myself as a football player and to continue the legacy to pass on.

"You grow up calling the Hogs. You grow up going to those games. Those were the games that you looked forward to and you were excited about. You went to school wearing Razorback jerseys."

Lindsey, who began as a walk-on before earning a scholarship earlier this year, said he would have attended the UA even without an opportunity to play football.

Many of the legacy players knew one another prior to college, including several who were high school teammates in Little Rock and Fayetteville. White and Hayden and Hudson Henry played together at Pulaski Academy; Jackson and Williams were teammates at Joe T. Robinson; and Lindsey, Tyson Morris, Eli Hale and Cheyenne O'Grady were teammates at Fayetteville.

"Most of the legacies that come here are Arkansas boys," Lindsey said, "so I think people who grew up being fans of the Razorbacks understand the standard and the culture of Arkansas Razorback football."