One final time to unite in The Rock: Hogs' Lunney has visions for season finale at War Memorial 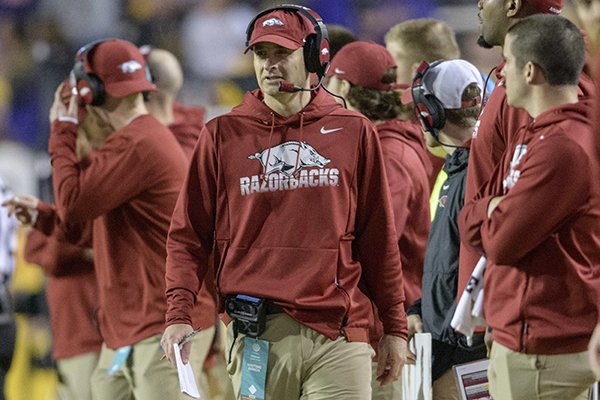 The emotional side of University of Arkansas interim Coach Barry Lunney Jr. has been on display periodically during his 19-day stint succeeding Coach Chad Morris.

The former Arkansas quarterback almost choked up Monday when discussing the importance of playing football games in Little Rock and has laid open his competitive soul to the Razorbacks the past few weeks.

Lunney made a pitch to Razorback fans everywhere on Monday to show support to the struggling team for today's season finale at War Memorial Stadium.

"If you care about these seniors, you'll go all in on this game," said Lunney, whose head coaching debut came last week in a 56-20 loss at No. 1 LSU.

War Memorial Stadium has already undergone $2 million in the Phase I renovations and is into Phase II of upgrades negotiated with the University of Arkansas to continue its football presence here. The contract also calls for an average attendance of 47,000 and escalating ticket revenues that start at $2.1 million today.

The Razorbacks bring an eight-game losing streak, a school-record 18-game SEC losing streak and an 11-game skid in the program's trophy games into the Battle Line Rivalry.

"It's been a rough three years on our football team, our football program, our fans, people who love this program, care so much about it," Lunney said. "The last three years there hasn't been a lot to cheer about."

Lunney said his "vision" was to unite as Razorback fans for 3 1/2 hours today.

"It's kind of tough,"senior defensive tackle McTelvin Agim said. "Just know we're going out on a losing streak, so we're just basically trying to get this win for the seniors and for the future of the program as well. These young guys have got to come back to this program next year. At least try to get them three wins in the season."

The Razorbacks are on a four-game losing streak to SEC teams in Little Rock. Arkansas' last conference victory here came on Nov. 19, 2011, in a 44-17 rout of Mississippi State when the Razorbacks were ranked No. 6 and headed toward No. 3. Additionally, a campus-wide mumps outbreak has extended to the football team, which might leave some players or staff members off the sideline today.

The game-day weather forecast has improved for Little Rock, with the chance for rain dropping to between 25% and 40%. The chance for rain was much higher earlier this week, when Lunney exclaimed, "Seventy percent chance of rain, that means 30 percent chance of sun. That's what I'm going for. Hey, grab a poncho. They're pretty cheap. Let's get a poncho, let's get in there and let's roll."

Embattled Missouri Coach Barry Odom has seen his career record fall back under .500 at 24-25 during his team's five-game losing streak. The Tigers were 5-1 at one point and looking like a possible challenger in the SEC East before the current slide.

Missouri, beset by injuries to key personnel like linebacker Cale Garrett, quarterback Kelly Bryant, receiver Johnathon Johnson and others, is 0-5 away from Columbia, Mo.

The Tigers' appeal to have their postseason eligibility restored by the NCAA was denied Tuesday, yanking away some incentive. But Odom has stressed all the reasons the Tigers should be motivated today.

"Our kids understand the importance of that," Odom said on Monday. "We talked about it in in detail last night in our team meetings, and we're well aware of what's at stake with getting the next win, finishing with the opportunity to have a winning season, and then at the top of that list, the rivalry game with Arkansas.

"So I know going into War Memorial Stadium we've got a number of guys on our roster that've played in that venue before in high school. ... And I know that, that Coach Lunney will have these guys ready to go, a former Razorback that cares deeply about their program."

Lunney gave a point-by-point listing of all the reasons the Razorbacks should have incentive today, starting with the game's meaning for the team's seniors.

Additionally, Missouri has won three games in a row in the series.

Lunney also stacked together the other means of motivation, like the SEC skid in Little Rock, the fact that it's the last game all together for the seniors and the staff and the lengthy conference losing streak.

"We've lost 18 straight SEC games," he said. "Seven of those have been by one score or less. So we've got a chance the last game of this tough season ... to break that streak. To me that sounds like that's a whole lot to play for."

The Razorbacks who conducted media interviews this week agreed.

"It's a big thing for us, and I'm just looking forward to my last real home game. I've played in War Memorial three times and won three state championships, so it's big."

The Razorbacks have lost the past eight installments of the Southwest Classic against Texas A&M, the past four games for the Golden Boot Trophy against LSU, and the past three in the Border Line Rivalry.

"It'd just something nice where there's not an empty trophy case anymore," junior center Ty Clary said of the game's importance. "And bragging rights, especially because I have guys on the other team that I know really well. It's just something that you really want to have."

Print Headline: One final time to unite in The Rock: Hogs' Lunney has visions for season finale at War Memorial