Vegan diners at Little Rock restaurant thankful for something different 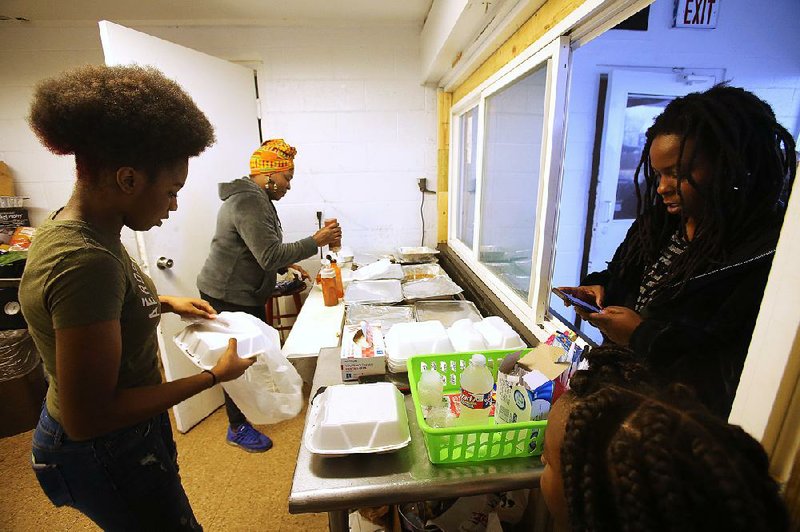 There's no tofurkey at this vegan Thanksgiving.

Elnora Wesley didn't think of it.

She has so many other favorites.

She made seitan "ribs" in a barbecue sauce, fried cauliflower "chicken wings," macaroni and "cheese," greens, black-eyed peas, yams and cornbread dressing. (Seitan is wheat gluten, a high-protein meat substitute that, like tofu, first appeared in Asian cooking centuries ago. It's typically served in the form of dense strips.)

Thursday's was a traditional Thanksgiving menu, minus the turkey. Wesley made vegan "cheese" dip and chili for those who just aren't into the conventional holiday fare.

Wesley's meals are served out of her restaurant, The House of Mental Eatery, or "The HOME," with the tag line "Let food be your medicine." She's been running it for about two years.

The HOME is a growing, modest counter-order spot inside the food truck court on South Chester Street in Little Rock. A chalkboard near the counter lists three year-end goals: a new fryer (check), an employee (check) and a food truck (not yet).

The site has two small tables and a few chairs, but the bulk of the food truck court seating is outside, under an overhang.

Wesley's followers and newcomers stopped by for a few hours Thursday to pick up their orders at her annual pop-up Thanksgiving. Dozens of people come every year.

All of the food is popular, especially the flaky-fried cauliflower, which comes with a barbecue or buffalo sauce.

"They're just so crispy," she said.

Bohannon used to go to the eatery frequently before she moved away to college.

She's been vegan since she was 16, when she copied her friend. Over time, however, she realized it was the right choice for her. Gradually she cut out things from her diet.

It's hard, though. Animal products show up in a lot of things people would never guess. Most toilet paper isn't even vegan. Manufacturers use gelatin -- made from animal tendons -- to connect plies.

But The HOME helped meet Bohannon's needs while she was still in high school. She didn't miss her opportunity to return on her Thanksgiving break.

Vegans abstain from consumption of animal products often for their health or animal welfare or the environment.

(Animal agriculture contributes more carbon dioxide to the atmosphere than some plant agriculture, although its relative contribution to greenhouse gas emissions in the U.S. overall is small, according to the U.S. Environmental Protection Agency.)

Wesley stopped eating meat as a kid and became a vegan over time while reading about food and culture and health. A balanced vegan diet -- not a "starchitarian" vegan diet, she says -- can be healthy. She doesn't necessarily think everyone should be vegan, but a focus on plant-based foods can lower cholesterol and lower risk for diabetes, she said, and help digestion.

"You'll be just lighter," she said.

The vegan meals are meant to mimic what the rest of the family would be eating, so vegans can blend in with their loved ones, Wesley said.

Henry Winslow, 30, picked up a plate of macaroni, cauliflower with buffalo sauce, black-eyed peas and greens.

He's not from here and was only stopping through Little Rock on Thursday. He dropped by The HOME at the recommendation of his Airbnb host after he said he was vegan.

Winslow didn't talk much Thursday. After photographing his meal with his cellphone, and answering a few questions, he looked back at his food and said he couldn't wait any longer to eat it.