Ingathering brings Methodists together to feed those in need by Francisca Jones | November 30, 2019 at 2:59 a.m. 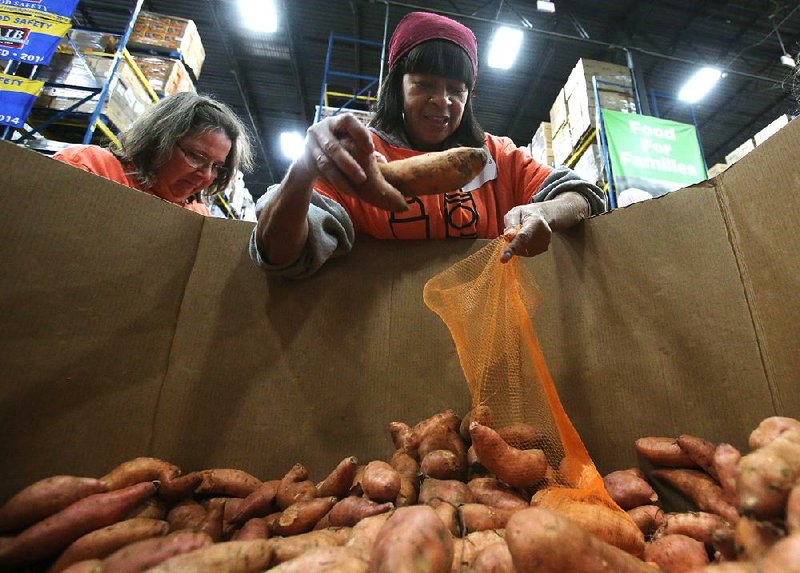 The rustle and thud of dry pinto beans being sorted filled a room at the Arkansas Foodbank last Saturday as volunteers bagged and weighed them in 2-pound allotments.

Laura Woods of Walnut Ridge and her daughter, Lyla, were among those sorting beans. The mother-daughter team wore matching hairnets, aprons and gloves, as were her friend Kristal Jones, and Jones' daughter, Claire.

"It's the second year for the kids to be able to come," Laura Woods said. "It used to be a mom thing to do, then when [Lyla and Claire] got older they came along."

The four were among the estimated 350 volunteers from 54 United Methodist churches who turned out Nov. 23 to sort, label and package beans and sweet potatoes -- and handle kits for disaster relief and other needs -- at Ingathering, the denomination's largest annual volunteer event in Arkansas.

Ingathering is the result of a partnership between the conference and the Arkansas Foodbank, with involvement from the Society of St. Andrew, a hunger-relief nonprofit and involvement with the Arkansas Hunger Relief Alliance. Individuals, church groups, youth groups and others from around the state gather each year to volunteer for one of the day's two-hour shifts, and last Saturday marked its 42nd year of the event dedicated to helping others in need.

Arkansas is home to approximately 120,000 Methodists, and the state's regional governing body is the Arkansas Conference. United Methodists are one of the nation's largest Protestant denominations, and the faith group numbers at least 12.5 million members worldwide.

Mary Lewis Dassinger is one of the event's organizers and the project coordinator for the faith's statewide ministry 200,000 Reasons, which is devoted to fighting childhood hunger. In 2018, she said, 78% of United Methodist churches in the state reported being involved in efforts to help hungry children and families within the past five years. Each of those reasons represents a child -- 200,000 were reported to be at risk of going hungry in 2014 -- and five years into the six-year ministry, Dassinger announced at Ingathering, that number is down to 167,440.

Ingathering directly supports the mission of 200,000 Reasons. The denomination bought 22,000 pounds of dry pinto beans through the food bank for the event, and an anonymous United Methodist farmer donated 40,000 pounds of sweet potatoes for Ingathering. The Arkansas Conference also gave the food bank a gift donation of $2,000.

Volunteers are set tasks of boxing and bagging produce to be distributed to food pantries among the 33 counties that the food bank serves. This year, Arkansas Foodbank Chief Executive Officer Rhonda Sanders said, volunteers came from areas beyond where it serves and, as a result, food would make it even farther across the state.

They also handle kits -- some of which contain school supplies for children or personal hygiene, others filled with cleaning supplies for disaster relief. In the case of the latter, the kits are sent to the Sager Brown Depot in Louisiana, the east coast depot for the United Methodist Committee on Relief. Jacob Turner, a liaison from the conference's communications office, noted that many of the buckets prepared at last year's Ingathering were sent back to Arkansas from Louisiana this year during Arkansas River flooding in late May and early June.

"It's a really neat intergenerational experience, with people who haven't known each other as they work side by side," Dassinger said of Ingathering. "The United Methodist Church is a connectional church, and we are all connected -- not just by doctrines, but also in how we organize our church and how we work with each other."

United Methodists, a global denomination, have faced "deep division," noted Methodist leaders in a letter at the end of May. Delegates of the faith worldwide voted in February to uphold the denomination's opposition to same-sex marriage and the ordination of gay clergy as currently reflected in its rule guide, the Book of Discipline, and to make harsher consequences for rule violators.

But with volunteers from as far as Fort Smith and as close as the Little Rock-North Little Rock area working together in proximity, the environment reflected an observation by spokeswoman Amy Ezell, who was at the event.

"There is no division here today," Ezell said.

The Rev. Jim Polk, assistant to Bishop Gary Mueller, emphasized the unity of the day during a brief welcome-and-worship service held between the two volunteer shifts, attended by a mix of people who had finished the first two-hour shift and those newly arrived and about to start volunteering.

"To me, this is a picture of what it means to be United Methodists," Polk said. "We understand 'Methodist,' but sometimes we lose track of the 'United' part. And to see us being able to come together like this and working through this ... common goal [meets] needs all of us can empathize with."

Patrick Moore of Jacksonville and about seven members of the youth group from Jacksonville United Methodist Church had arrived in time to volunteer during the 8-10 a.m. shift Nov. 23. Moore, who recalled growing up hungry in Mississippi, said he'd enjoyed helping at Ingathering and was glad he had been a part of the day.

"[We do this] so somebody can have something to eat on Thanksgiving Day," Moore said. "I'm glad I did it this morning. ... It's good to help somebody else who can't afford it. I know it, I've been through it. I was a kid growing up not knowing where my next meal was coming from. I know it can be very stressful on parents not knowing how they're going to feed their children when they've still got to pay bills."

To Polk, the event was also an example of "hands-on opportunities to be literally the hands of Christ."

At the end of the event, volunteers had sorted, bagged and labeled all 40,000 pounds of sweet potatoes, and 3,500 pounds of the pinto beans -- the food bank will distribute the remaining 18,500 pounds of beans. All were set for distribution at food-pantry partners in the 33 counties with which the food bank partners. Two pallets of disaster-relief buckets and nine pallets of school and hygiene kits were also prepared.

Sanders said the food bank works with all denominations, and that the timing of Ingathering -- traditionally held each year on the Saturday before Thanksgiving -- is intentional.

"[The denominations] all reach into feeding because feeding people is at the core of all faith groups," Sanders said. "I do think it's very well noted that this is the beginning of the giving season; this is when we start thinking about ... the gifts we give or the things we have, so to kick [the season] off with [Ingathering] is pretty significant."

"[Ingathering] just fits in with the spirit of the history of Methodism," Turner said. "Methodism grew as a movement of the working class in Great Britain, and so giving wasn't a money thing. You gave what you could.

"So for us this is very symbolic of ... the early roots of [Methodism], it's the common [people] getting together to do what we can to make other people's lives better, no matter our status." 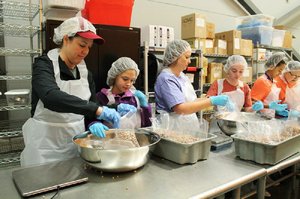 Photo by Francisca Jones
Laura Woods (from left), her daughter, Lyla; and Kristal Jones and her daughter, Claire, sort dry pinto beans into 2-pound bags at the Arkansas Foodbank during Ingathering on Nov. 23.