Beth and William Bandy of Little Rock are the parents of the bride. She is the granddaughter of the late Betty and Richard Bandy of Minneapolis and the late Mabel and Rodney McKitrick of Ocean Springs, Miss.

The groom is the son of Mary Catherine France and Kelly and James France, all of Little Rock. His grandparents are the late Albina and Reno France of Forrest City and the late Mary and Edward Miller of Memphis.

The bride, given in marriage by her father, wore her mother's wedding gown of ecru Chantilly lace with a satin portrait neckline. She carried a bouquet of white hydrangeas and baby's breath.

Melissa Bandy of Little Rock served as her sister's matron of honor. Laura Reker of Durham, N.C., was a bridesmaid. They wore navy gowns with cap sleeves and portrait collars and carried bouquets of white roses with eucalyptus and privet berries.

Jamie Schildknecht of Little Rock, niece of the bride, was a flower girl.

Best man was John France of Houston, brother of the groom. Groomsmen were Spencer Jansen of Little Rock and John Condon of Laredo, Texas. Guests were seated by Vincent France, cousin of the groom, and Rob Noirot, both of Little Rock, and Nick Johnson and Daniel Ervin, both of Memphis.

A reception was held at The Pavilion at Heifer Village. Guest tables held vases of magnolia branches or floating candles. Music was by The Rodney Block Collective.

The bride graduated from the University of Evansville, Evansville, Ind., with a bachelor's degree in mass communication and Spanish and a master's degree in public service administration. She is a program project specialist at Arkansas Children's Hospital.

The couple will live in Little Rock after a short trip to Eureka Springs following the wedding and a delayed honeymoon to Hawaii. 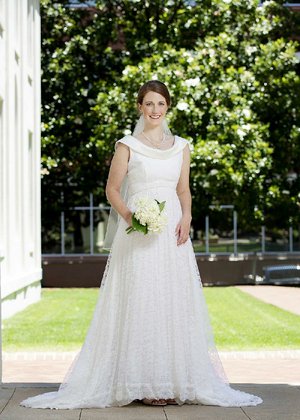