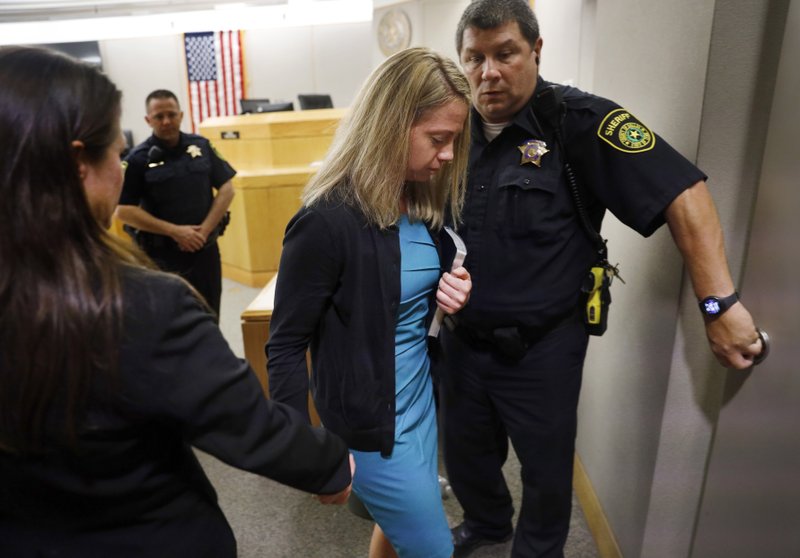 Holding a Bible given to her by State District Judge Tammy Kent, former Dallas Police Officer Amber Guyger leaves court for jail following her sentencing, Wednesday, Oct. 2, 2019, in Dallas. Guyger, who said she mistook neighbor Botham Jean's apartment for her own and fatally shot him in his living room, was sentenced to a decade in prison. (Tom Fox/The Dallas Morning News via AP, Pool)

DALLAS — Evidence from the trial of a former Dallas police officer convicted of killing her neighbor has fueled new questions about whether accused officers are treated differently than other suspects, including testimony that a camera in the cruiser where the officer sat after the shooting was flipped off and that her sexual text messages with her partner were deleted.

Even as Amber Guyger begins her 10-year prison sentence for murder in Botham Jean's September 2018 death, testimony in her case has prompted demands for the head of a police union to step down. It also has led Dallas Police Chief U. Reneé Hall to announce the internal affairs department would look into the deleted texts and deactivated camera. The Dallas County District Attorney's Office declined to comment Wednesday on whether it is also investigating.

Dallas Police Association President Mike Mata said Wednesday that he was guarding Guyger's rights when he had another officer shut off the camera in a police car where Guyger waited after the shooting.

Guyger and her partner, Martin Rivera, both acknowledged from the witness stand that they deleted text messages following Jean's death about their on-and-off relationship. Prosecutors managed to recover the texts and argued that Guyger was distracted by the explicit messages she exchanged with Rivera soon before she walked into Jean's apartment, which she said she thought was her own. Guyger testified that she mistook the 26-year-old accountant from the Caribbean island nation of St. Lucia for an intruder before shooting him.

Raising the 31-year-old officer's sexual text messages with her partner, Mata said, was prosecutors' "attempt to slut shame her."

Some Dallas residents' deep mistrust of their police has been on display since Guyger's trial ended.

The first meeting of a new Community Police Oversight Committee ended with shoving and shouting Tuesday night when the panel adjourned without taking public comment. Hall intervened and opened the floor to discussion, much of it critical of the department and mistrustful of the committee's intensions.

And conspiracy theories have swirled around the death of a witness in Guyger's trial, who was shot dead two days after her sentencing. Investigators said Tuesday that the killing of Joshua Brown, who like Jean was black, was unrelated to his testimony and that they suspect three Louisiana men , who were allegedly in Dallas to buy drugs.

Lee Merritt, a lawyer who represents the Jean and Brown families, said he has no reason to doubt Dallas detectives' conclusions. But he's asking the department to turn the investigation of Brown's death over to another agency.

"It will be nearly impossible to conduct a reliable investigation in a climate where the investigating agency has been implicated in the murder itself," Merritt said in a Tuesday. "That implication naturally stems from a trial where a Dallas police officer was convicted of murder and other DPD officers were shown to have participated in condemnable behavior in destroying evidence and interfering with an investigation."

Mata said the text messages were not related to the shooting and prosecutors only brought them up at Guyger's trial to put "the scarlet letter on her as a person involved in adultery." Rivera was married; Guyger was not.

As for the car camera, Mata said he did nothing wrong by having it turned off.

"She was talking with her attorney, and that's attorney-client privilege," Mata said. "(The lead prosecutor) pushed this narrative to make it look like the department was corrupt and I was corrupt and unethical. It's a win-at-all-costs type of mentality."

Dr. Brian Williams, the former head of the Dallas' police oversight board, said the actions revealed at trial further eroded trust for police that already is thin in the community.

"When you're working to try to build trust things like that do not work to the advantage of bringing both parties together," he said.

Last week, the Jean family stood with Dallas activists and religious leaders asking the U.S. Department of Justice to conduct a "comprehensive audit" of what they characterized as long-standing problems with the city police department.

The Justice Department under former President Barack Obama opened wide-ranging investigations into more than 20 local law enforcement agencies it said had a pattern of civil rights violations, including departments in Baltimore, Chicago and Ferguson, Missouri. These probes typically ended with court-enforceable consent decrees that commit the department to making changes recommended by the federal government.

Under the Trump administration, the department has taken a sharply different approach, pulling back from such sprawling investigations. But its civil rights division has continued to pursue investigations involving police shootings and other alleged misconduct.

When looking at a police shooting, investigators will start with a different set of assumptions than they would in a shooting involving only civilians, said Bowling Green State University criminologist Philip Stinson, a former lawyer and police officer. He said one of the most important steps a department can take to foster community trust in such cases is to bring in an outside agency to investigate.

In Guyger's case, it was the Texas Rangers who led the investigation. Stinson said it's important to keep in mind that the former officer was convicted and sentenced to prison.

"I think that the community is right to push for transparency and for the Dallas police department to improve," he said. "But don't lose sight of the fact that justice has been served."