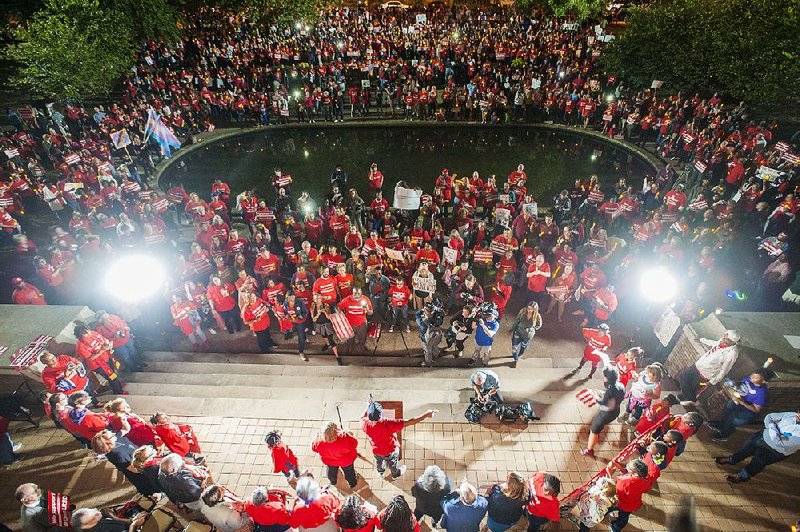 The crowd packed the sprawling lawn and lined the massive, arching steps of the 92-year-old building and screamed that dividing the district's schools on the basis of achievement scores would be the undoing of the students' futures.

The Arkansas Board of Education is to vote today on a framework for returning the 23,000-student district to local control after five years of state oversight. One option being considered is putting most schools under a local board but keeping schools that received F statewide achievement scores under "different leadership," a move protesters said would segregate the district along racial and economic lines.

"If I don't stand up for my kids, who will?" said April Toney, a district parent who crowded close to the speakers Wednesday night.

[Video not showing up above? Click here to watch » https://www.youtube.com/watch?v=UQ-fxvWgK5o]

Toney stood among a huddle of students, teachers and district supporters. Many held signs that read "We Support #OneLRSD" and "Apoyamos a #OneLRSD," (apoyamos means "we support" in Spanish). One little blond girl standing at the apex of the school's arching stairway held a sign that read "Dumbledore would never allow this."

"We are not giving up our students," said Stacey McAdoo, Arkansas' teacher of the year for 2019, as she stood near the school where she teaches. "They are not for sale."

McAdoo's worry, echoed by others throughout the hourlong rally, was that when the state board says "different leadership," it means privately funded charter schools, where McAdoo said students' educations would be monetized.

Instead, the speakers said the teachers, parents and community of Little Rock should be allowed to govern themselves.

McAdoo said her students wrote her a page of points they wanted her to make on their behalf when she addressed the crowd. One of those students, Toney's daughter Jasmine, listened as McAdoo read the list.

One request referred to children who don't perform well on tests. The student "said to me, they cannot help where or to whom they were born," McAdoo said. "Many of them would be considered failures by the test scores. ... None of these children are failures."

The eclectic nature of the crowd, Rabbi Barry Block of Congregation B'nai Israel said, is representative of the diversity of the Little Rock district. Wednesday was the end of Yom Kippur, a 10-day religious fast in the Judaic faith that is meant as a time of repentance, Block said.

Mireya Reith, a former state board member and current president of Arkansas United Community Coalition, told the crowd that she voted again and again against state control of the district.

"They don't think they're being racist ... but they think they know better than us," Reith said.

Many of the speakers referred to the significance of the protest being held on the steps of Central High, where in 1957 protesters mocked and attacked nine black students as they entered the school for the first time. The students were initially blocked by Gov. Orval Faubus until President Dwight D. Eisenhower federalized the Arkansas National Guard and deployed troops to protect the Little Rock Nine.

"We are literally standing on the steps of history," Reith said. "Look around you."

Ali Noland, a parent, said where once "people who looked like me" jeered and fought against unity in Little Rock, "we are standing shoulder to shoulder."

"Everything those nine brave teenagers fought for ... is at risk now," Noland said.

Among the speakers Wednesday night were district students, all of whom said they did not want to be separated from their peers. James Wilson, a 17-year-old student at McClellan High School, said the crowd of people fighting for his right to be valued as a student was "beautiful."

Wilson said his mother worked hard to raise four children in a single-parent home. Wilson's mother, Lori Andrews, began to cry as her son praised her to the crowd.

"I should not have to fear my sister will be segregated," Wilson said. "We deserve a choice because these are our lives."

"Tomorrow we fight," Knapp Gordon said. "Tomorrow we stand united, and we will not be divided." 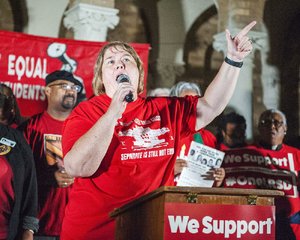