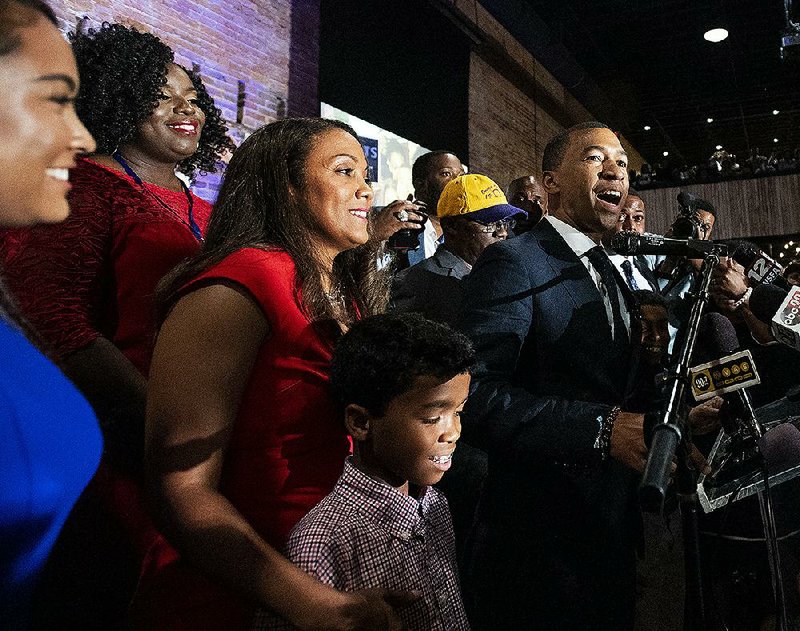 Steven Reed (right), mayor-elect of Montgomery, Ala., said Tuesday’s election was “about all of the hopes and dreams that we have as individuals and collectively in the city.”

MONTGOMERY, Ala. -- Alabama's capital, a city once known as the cradle of the Confederacy and later the birthplace of the civil-rights movement, has elected its first black mayor.

Probate Judge Steven Reed, 45, clasped the history-making victory to be elected the next mayor of Montgomery after defeating businessman David Woods by a decisive margin. Reed won about 67% of the vote in Tuesday's runoff, according to unofficial returns.

Reed was already the first black probate judge elected in Montgomery County and was one of the first to issue marriage licenses to gay couples in the state.

The city also played a critical role in the civil-rights movement. City Hall is not far from the church once led by the Rev. Martin Luther King Jr. and is also near the spot where Rosa Parks was arrested for refusing to obey bus segregation laws.

WASHINGTON -- A Defense Intelligence Agency official was arrested Wednesday and charged with leaking classified intelligence information to two journalists, including a reporter he was dating, the Justice Department said.

Henry Kyle Frese, 30, was arrested Wednesday by the FBI when he arrived at work at a Defense Intelligence Agency facility in Virginia. He was charged with willfully disclosing national defense information.

Frese, who has a top-secret government security clearance, is accused of accessing at least five classified intelligence reports and providing top-secret information about another country's weapons systems to the reporter he was dating.

The two journalists were not immediately identified, but one apparently was romantically involved with Frese and shared an Alexandria, Va., residence with him, authorities said. They would not say whether she works for a U.S. or foreign news organization.

The government also intercepted a call in September during which Frese allegedly read classified national defense information to the second journalist.

"Frese betrayed the trust placed in him by the American people -- a betrayal that risked harming the national security of this country," said Assistant Attorney General John Demers, who leads the Justice Department's national security division.

AUSTIN, Texas -- A federal court of appeals has heard arguments in a lawsuit challenging the University of Texas' removal of three Confederate statues from campus two years ago.

The Texas chapter of the Sons of Confederate Veterans sued the school after it removed the statues of Robert E. Lee, Albert Sidney Johnston and John Reagan after a white supremacist drove into a crowd of counterprotesters in Charlottesville, Va., killing a woman and injuring 19 other people. At the time, the university's president called such monuments "symbols of modern white supremacy and neo-Nazism."

Kirk Lyons, the lawyer for plaintiffs David McMahon and Steven Littlefield, who belong to the group made up of male descendants of Confederate soldiers, argued Tuesday before the 5th U.S. Circuit Court of Appeals that the removal of the statues amounted to a violation of their free-speech rights and breached an agreement the school made with Maj. George Washington Littlefield, who donated the statues in 1921.

In a statement, Texas Attorney General Ken Paxton said the plaintiffs lack the legal standing to challenge the school's decision. A U.S. district judge dismissed the case in June 2018 also for the lack of legal standing.

BOSTON -- A Massachusetts sheriff is ending his office's longtime relationship with the U.S. Immigration and Customs Enforcement agency, saying his jails will stop housing hundreds of federal detainees in order to house more female inmates.

Suffolk County Sheriff Steven Tompkins maintained the move, which he announced late Tuesday, is not a political statement but an effort to improve the lives of incarcerated women, which he said is the fastest-growing incarcerated population in the country.

The South Bay jail in Boston currently houses about 1,200 inmates, of which about 200 are immigration detainees and nearly 100 are female inmates.

The jail's decision will have a "huge impact" on the immigration-enforcement agency's day-to-day operations as the facility is close to federal immigration court and Logan International Airport in Boston, said Todd Michael Lyons, the agency's New England deputy director.

The agency said detainees will now have to be placed in other Massachusetts jails or elsewhere in the country, potentially affecting the ability of families or lawyers to visit in person.