State's work requirement for Medicaid came with $26M in costs 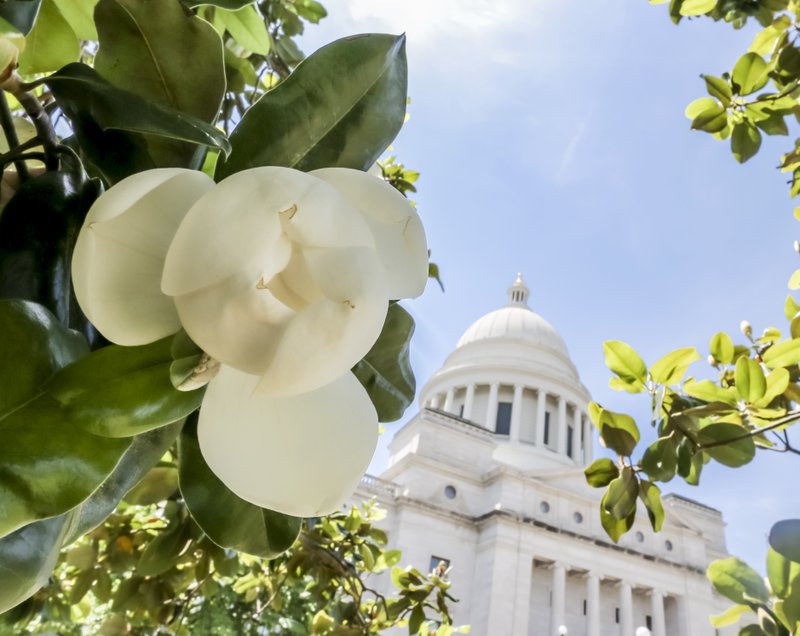 The Arkansas state capitol building stands against a blue sky with a partially unfurled Magnolia blossom in the foreground in Little Rock.

Arkansas' Medicaid work requirement cost the state and federal governments more than $26 million to implement and increased the cost of health plans offered to consumers through healthcare.gov, a federal watchdog agency found.

Arkansas' requirement, the first added by a state to its Medicaid program, resulted in 18,164 Arkansans losing coverage for noncompliance before a federal judge struck it down in March.

A three-judge panel of the U.S. Court of Appeals for the District of Columbia Circuit is scheduled to hear oral arguments today in an appeal by the state and President Donald Trump's administration of the judge's ruling, as well as of a ruling that struck down a similar requirement in Kentucky.

The bulk of Arkansas' administrative costs -- $23.1 million -- came from changes associated with its eligibility verification and enrollment system under a contract with Princeton, N.J.-based eSystems, according to the state Department of Human Services.

About $8 million of that amount went to one-time upgrades, such as building an online portal that recipients could use to report their hours.

The department said some of the enrollment system's features can be used even without the work requirement in place. For instance, recipients can use the portal to update their "demographic information" and receive notices through a "secure inbox," according to a summary of the changes provided by the department.

The administrative costs also included $2.9 million under a contract with the Arkansas Foundation for Medical Care for outreach and focus groups with enrollees.

The administrative overhead amounted to an average of $152 for each of the 171,000 enrollees that state officials estimated could potentially be subject to the work rule.

That was the third-highest per-enrollee cost among the five states examined by the watchdog agency. The cost in the other states ranged from $463 per enrollee in Wisconsin to $84 in Indiana.

The federal government paid about 86%, or about $22.4 million, of the administrative costs in Arkansas, with the state covering the remaining $3.7 million, the GAO said in a report released Thursday.

Kevin De Liban, an attorney with Jonesboro-based Legal Aid of Arkansas who helped with the successful court challenge of Arkansas' requirement, said the $26 million would have been better spent on "proven anti-poverty measures" such as job training, transportation or earned income tax credits.

Instead, he said, it was "wasted on bureaucratic hoops that keep people from getting ahead."

He added that the work requirement imposed additional costs on people who lost coverage and hospitals and doctors who provided care without being reimbursed.

"It seems to be it's the height of fiscal irresponsibility," he said.

To meet the work requirement, Arkansas enrollees had to spend 80 hours a month on work or other approved activities, such as volunteering, and report what they did through the portal on a state website.

The Government Accountability Office said Arkansas initially required the hours to be reported only through the site because the state could receive a higher match rate from the federal government for technology upgrades than it could for labor costs.

After complaints about enrollees' difficulty reporting through the website, the state added an option in December for them to report over the phone.

That's because under the Arkansas Works program, the state purchases coverage from the companies for Arkansans who became eligible for Medicaid when the state expanded it in 2014.

Only enrollees covered under such plans who were age 19-49 were subject to the work requirement.

The insurance companies conducted their own outreach and assigned employees to help enrollees report their work hours.

One company gave $30 gift cards to 600 enrollees who had met the requirement for three months in a row, according to the GAO report. The company, which isn't named, also sent 270,000 letters about the work requirement to enrollees at a cost of about $25,000, the report says.

The companies "were instructed to include the costs of administering work requirements in the premiums, according to Arkansas officials," the watchdog's report says. "State officials and representatives from a qualified health plan that we spoke with could not provide the amount that the state's premium assistance costs increased as a result."

The plan representatives did say, however, that the cost would be passed along, not only to the Medicaid program, but also to consumers who buy coverage through healthcare.gov, according to the report.

The costs for both Medicaid enrollees and consumers who buy their own coverage are considered together when the insurance companies set their rates. The plans sold to the Medicaid program to cover Arkansas Works enrollees are also among those offered through healthcare.gov, and the premiums are the same for the plans whether they are purchased by the state or individual consumers.

More than 53,600 Arkansans were covered by non-Medicaid plans sold through the federal website as of Oct. 1, according to the Arkansas Insurance Department.

Meanwhile, Arkansas Works was covering more than 246,000 people as of Sept. 1.

U.S. District Judge James Boasberg ruled March 27 that the Trump administration exceeded its authority in approving work requirements in Arkansas and Kentucky by failing to consider how they would affect the Medicaid program's goal of providing health coverage to needy people.

In July, he threw out a work requirement that had been approved in New Hampshire for the same reasons.

In its report on Thursday, the Government Accountability Office criticized the federal Department of Health and Human Services' Centers for Medicare and Medicaid for not considering administrative costs when deciding whether to approve demonstration projects, such as those allowing work requirements.

It said the health agency should consider such costs when assessing whether such a project meets a requirement to be "budget neutral."

In a written response to the report, the federal department countered that such costs are typically "a relatively small portion of the total cost." It added that states must report all their expenditures to the federal government.

"HHS believes that our current approach to accounting for state administrative costs is appropriate for the level of financial risk to the government," the department said in its response.