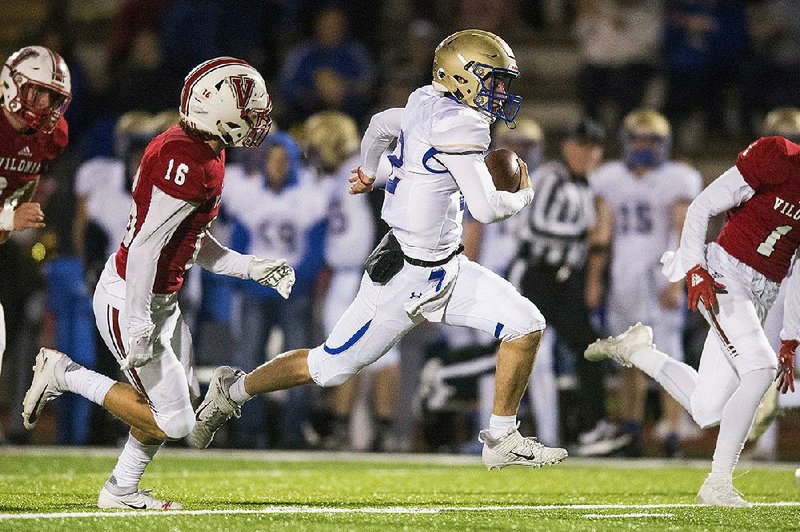 Harrison quarterback Ben Johnson (middle) runs past the Vilonia defense Friday to score a 55-yard touchdown during the Goblins’ 17-15 victory over the Eagles in Vilonia. More photos are available at arkansasonline.com/1012harrison/. ( Jeff Gammons)

VILONIA -- Harrison brought its defense to Faulkner County and clamped down on the Vilonia Eagles.

The Goblins, the Arkansas Democrat-Gazette's No. 9 team overall and No. 2 team in Class 5A, remained undefeated as they defeated Vilonia 17-15 at Phillip Weaver Stadium in a 5A-West Conference game.

Smith scored from 3 yards out with 1:33 remaining in the contest to pull Vilonia within 17-15.

The Eagles went for the on-side kick with only one timeout remaining and junior Noah Newman's kick bounced off a Harrison player. But Harrison senior Bryant Ulrich came out of the pile with the ball and senior quarterback Ben Johnson sealed the Goblins' victory with a 15-yard run.

Harrison held Vilonia to a season-low in points, a performance that pleased Goblins Coach Joel Wells.

"Our defense really won the football game tonight," Wells said. "They don't have to be pretty. Any road win in the conference is always good. I think we'll be the only 3-0 team in the conference after tonight."

Senior running back Gabe Huskey, a first-team Democrat-Gazette All-Arkansas Preps selection as a junior last season, led the Goblins, finishing with 181 yards and a touchdown on 22 carries.

Johnson had 13 carries for 114 yards and a touchdown for the Goblins.

As for Vilonia, Coach Todd Langrell said the Eagles had their chances, but couldn't capitalize on them. The Eagles (3-3, 2-1) missed a 39-yard field goal attempt and had two drives stopped on fourth down inside the Harrison 20.

"In games like this, I always believe when you're the underdog, you have to take chances," Langrell said. "You always go back and question yourself. Should we have kicked the field goal there? I felt like we needed to take a chance. That's on us. We have to do a better job."

Harrison took a 3-0 lead with 10:35 left in the second quarter on senior Max Payne's 24-yard field goal. Payne's kick capped a 17-play drive that started at the Goblins 20 with 5:02 left in the first quarter.

After Harrison's defense stopped Vilonia at the 1, the Goblins offense responded quickly.

Two runs by Huskey of 25 and 19 yards set up Johnson's 55-yard touchdown run up the middle that extended the Goblins' lead to 10-0 with 7:29 left before halftime.

Leading 10-0 entering the second half, Harrison stretched its lead to 17-0 with 10:34 remaining in the third quarter. Johnson's 15-yard run set up Huskey's 43-yard scoring run down the left sideline.

Harrison, which advanced to the Class 5A semifinals last season, is the only undefeated team in the 5A-West at 3-0. Wells said that playing in the 5A-West is not easy and the Goblins have to prove themselves every week considering their recent run. 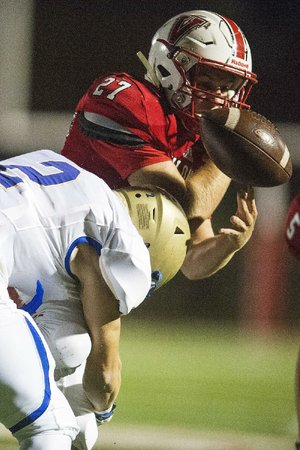 Photo by Jeff Gammons
Vilonia’s Seth Kirk (27) loses the ball after being hit by Harrison’s Colton Shaver during the Eagles’ 17-15 loss to the Goblins on Friday in Vilonia.