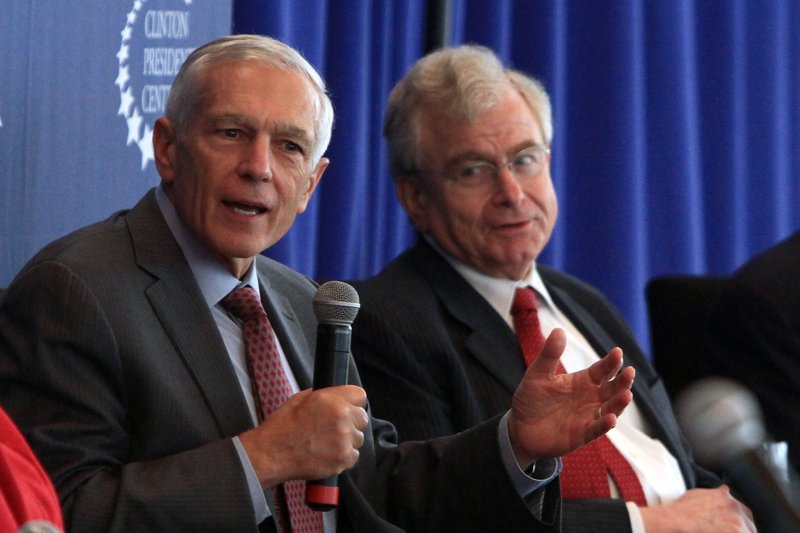 FILE — Wesley Clark, left, and Samuel Berger, former deputy National Security Advisor, talk about newly declassified documents on the role of intelligence during the 1992-1995 Balkan conflict during a 2013 symposium hosted by the Clinton Presidential Library.

Trump's actions in Syria and Ukraine have shaken allies, he told the Arkansas Democrat-Gazette in an interview.

For those living in Moscow's shadow, Trump's decision raises the specter of "appeasement" and "1938," he said, a reference to the year that the United Kingdom, France and Italy allowed Nazi Germany to seize the Sudetenland in Czechoslovakia.

The unfolding disaster in Syria was foreseeable and preventable, Clark said.

"It's a real tragedy for U.S. foreign policy and for the Kurds," he said.

"What we did was open the door to a Turkish invasion. We betrayed our Kurdish allies, who lost 10,000 people fighting for us against ISIS. We've let ISIS prisoners escape, and their command structure is still intact. So now they'll be stood up again and coming after the United States. By pulling back, we allowed Syria's [President] Bashar Assad to reoccupy in the region. And he's been criticized by us for a decade for human-rights abuses, for oppressive tactics, for wanton killing of civilians. We've opened the door to Iran for greater passage, through Syria, to threaten Israel, and we've given Russia the strong role of leadership in the region," he said. "None of that is in the interest of the United States. And here's the point: Our 50 U.S. troops up there were not in danger. We didn't have to do this. The question is why we did it."

"In this case, the United States is not only withdrawing forces, but it's, as a national policy, trying to realign itself in the region to compensate for two decades of overextension," he said. "President Trump is absolutely right. It was a terrible strategic mistake to invade Iraq. However, how you get out is critical."

The consequences of Trump's decision should come as no surprise, Clark said.

"Every military and national security expert would have told you what would happen if we pulled those troops out. It's not partisan. We all know the region. We all understand the complexities," he said.

With allies doing most of the fighting, the number of U.S. casualties in the area had been low, Clark noted.

"It would be one thing if we were over there at enormous expense losing 100 soldiers a month like we did at the height of the conflict in Baghdad in 2007. But that's not what's happening. Actually, there were very few losses from this. We had stabilized the region. So that's why it's inexplicable why this decision was made," he said.

Asked whether Trump's conduct raises questions about his fitness to be commander in chief, Clark said: "[It] raises many, many questions. We may never understand why he did it. But if you ask the people in the region, they have their own theories. They see it as a betrayal. They believe that maybe he was blackmailed by [Turkish President Recep Tayyip] Erdogan. ... Maybe his hotel interests in Turkey conflicted with this. Maybe [Russian President Vladimir] Putin whispered in his ear and said, 'It's time to leave.' Nobody knows why he did it, and we may never find out. He says he trusted his gut. It didn't work in this case," Clark said.

Trump's decision on Syria will have repercussions around the world, he predicted.

"There's damage in the region, certainly. People like the Kuwaitis, the Qataris, even the Saudis, where he's reinforced with troops, are asking questions. But it's actually broader than that. Something like this has global impact."

In South Korea, confidence could be undermined, he said. In Ukraine, "where people are fighting for the very Western principles that we say we stand for," concerns were already elevated, he added.

"The basic principle of American diplomacy since the end of the Second World War is, when countries that are weak are facing adversaries that are armed with nuclear weapons, that's where we come in to help maintain freedom. That's what NATO was all about. And Ukraine's not a member of NATO. But these other Eastern European countries that border Ukraine, they are members of NATO. Their leaders told me in New York that this is like 1938 in Europe. They can see the appeasement and they can see what's coming, so this has global implications," he added.

Clark, 74, was born in Chicago but raised in Little Rock. Three years after his career with the U.S. Army ended in 2000, he became a Democratic candidate for president, but he withdrew from the race in 2004.

Last week, former Arkansas Gov. Mike Huckabee, a Republican and former presidential candidate, was among those who had pleaded with Trump to reverse course, calling it "a HUGE mistake to abandon Kurds."

"They've never asked us to do THEIR fighting-just give them tools to defend themselves. They have been faithful allies. We CANNOT abandon them," Huckabee tweeted on Oct. 7.