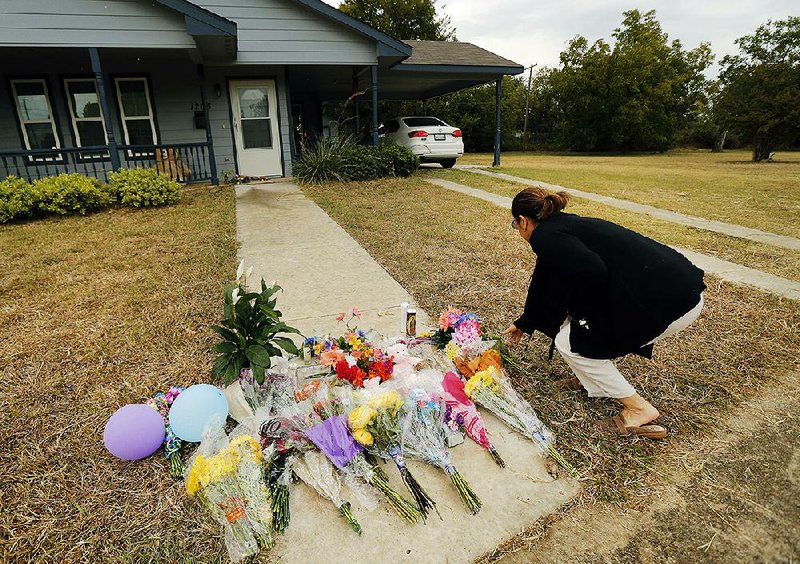 Anastasia Gonzalez of Burleson, Texas, leaves flowers Tuesday on the sidewalk in front of Atatiana Jefferson’s home in Fort Worth. More photos are available at arkansasonline.com/1016texas/

FORT WORTH -- The murder arrest warrant for a white police officer who shot and killed a black woman Saturday says the victim was holding a gun after she heard noises outside her window.

Fort Worth Mayor Betsy Price said Monday that the gun was irrelevant to the investigation. In Texas, homeowners have a right to be armed on their own property, Price said.

A witness, the woman's 8-year-old nephew, told a forensic interviewer that after Atatiana Jefferson heard noises outside their home and thought there might be a prowler in the backyard, she reached into her purse, grabbed a handgun and pointed it toward the window, the warrant said.

That's when Fort Worth police officer Aaron Dean shot Jefferson through the window, and she fell to the floor, according to the warrant charging Dean with murder.

[Video not showing up above? Click here to watch » https://www.youtube.com/watch?v=eJm6r2FAHrU]

According to the warrant, the officers never announced their presence.

Jim Lane, Dean's attorney, said Tuesday that neither he nor his client had any comment regarding the arrest or the case.

At a news conference Tuesday, Interim Police Chief Ed Kraus said it made sense that Jefferson had a gun if she felt threatened by someone in her yard.

Black politicians and others criticized the police and the media for mentioning Jefferson's weapon, accusing the department of trying to deflect blame onto an innocent victim.

"The Fort Worth Police Department is going about the task of providing a defense for this officer," said Lee Merritt, an attorney for the Jefferson family.

"Why would you publicize that Ms. Jefferson had a gun in her home?" he asked. "I'm sure the police told you that. But that was her Second Amendment right, and equally as important, it had nothing to do with the incident for which we are here about. Too often, you, the media, have been complicit in throwing dirt on the victim while ignoring the real culprit, current law enforcement."

State Rep. Nicole Collier, a black Democrat from Fort Worth, likewise complained about the tendency to focus on things that could exonerate police officers, "like showing marijuana or showing a handgun when people are rightfully in their own home."

Darch and Dean, who were responding to a neighbor's call about open doors at the home, saw that the front and side interior doors were open, but the glass storm doors were closed, the warrant says. The family's vehicles were in the driveway.

Jefferson and her nephew were playing video games when they heard noises outside, the child told police. He was in the room with Jefferson when Dean shot her, according to the warrant.

Officers called for an emergency medical crew, which pronounced Jefferson dead after it arrived, according to the warrant.

Fort Worth officers support Dean's arrest, Kraus said. "I don't have any officers saying this action should not have been taken against this individual, this officer. I'm getting the complete opposite response."

Kraus spoke of the day-to-day work that police officers do to build trust. He said shooting a woman inside her home during a welfare check washes all that work away.

Dean, 34, of Arlington resigned from the Fort Worth Police Department on Monday morning.

He was arrested about 6 p.m. Monday at his attorney's office, police said. He was booked in the Tarrant County jail and released on bail Monday night, according to jail records.

Information for this article was contributed by Mitch Mitchell of the Fort Worth Star-Telegram; and by Jake Bleiberg, Jill Bleed, Nomaan Merchant and Adam Kealoha Causey of The Associated Press. 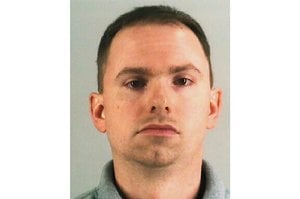 Photo by AP/Tarrant County Jail
This undated photo provided by the Tarrant County Jail shows Aaron Dean. The Fort Worth police officer who shot and killed a black woman through a back window of her home while responding to a call about an open front door was charged with murder on Monday after resigning from the force.