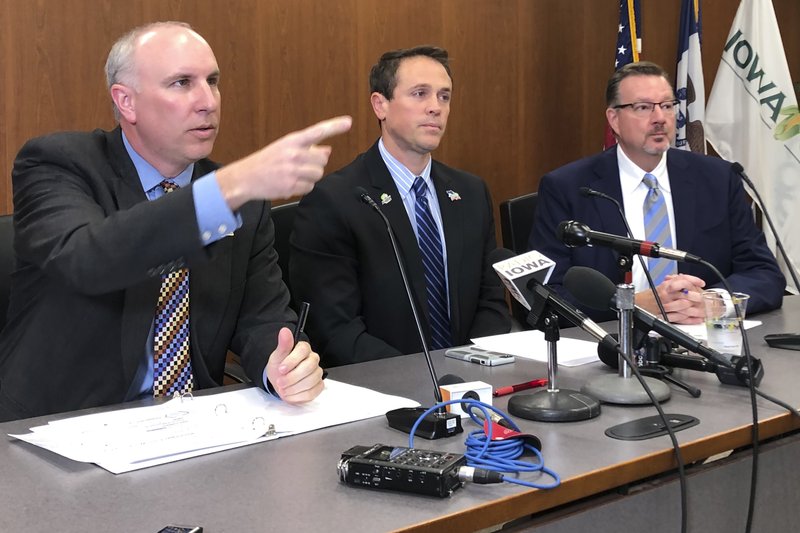 Monte Shaw, executive director of the Iowa Renewable Fuels Association; Grant Kimberley, executive director of the Iowa Biodiesel Board and Craig Floss, CEO of the Iowa Corn Growers Association hold a press conference at the Iowa Corn headquarters in Johnston, Iowa, on Wednesday, Oct. 16, 2019. They expressed disappointment and anger at the Trump administration for a new EPA biofuels rule they say does not uphold an agreement they had with Trump on Oct. 4 on the level of ethanol of biofuels to be blended into the nation's fuel supply. (AP Photo/David Pitt)

DES MOINES, Iowa -- Agriculture commodity groups and some farmers expressed frustration and anger Wednesday with a rule released by the Environmental Protection Agency that they said fails to uphold a promise President Donald Trump made almost two weeks ago to fulfill the intent of an ethanol law passed by Congress.

Since Trump became president, the EPA has given 85 oil refineries exemptions from blending ethanol into the gasoline they sell. That has removed 4 billion gallons of corn-based ethanol from the market, angering farmers who rely on the ethanol industry to buy nearly 40% of the corn crop produced to make the renewable fuel additive.

After months of pressure from farmers, trade groups, lawmakers and governors in farm states, Trump on Oct. 4 announced plans to require oil refineries to replace the ethanol gallons lost through the exemptions.

Farmers and lawmakers say the EPA had agreed to add waived ethanol back into the fuel supply by calculating the amount waived over a three-year period, which would add about 1.3 billion gallons of biofuels back into the nation's fuel supply next year. That would ensure that beginning in 2020, the government would comply with the 15 billion-gallon standard that is already required under federal law. The deal would not restore the already lost biofuels, a compromise the industry was willing to make in exchange for an EPA promise to change policy going forward.

On Tuesday, the EPA released the draft rule that would use a three-year average of gallons that the Energy Department recommended waiving instead of the actual waived amount, increasing biofuel blending by about 770 million gallons, which is about half of what the industry expected.

"I thought a deal was a deal. When Donald Trump makes a deal, isn't it a deal?" said Monte Shaw, executive director of the Iowa Renewable Fuels Association, a trade group for the 43 ethanol plants and 11 biodiesel refineries in Iowa, the nation's largest biofuels producer.

The exemptions were designed to ease the burden on small refineries that might not be able to economically blend required ethanol amounts, but the EPA under Trump has allowed exemptions for profitable larger refineries.

The exemptions have led to the closing of 20 ethanol plants nationwide, Shaw said.

A spokesman for the EPA said in response to an email seeking comment that the draft rule "is the text of the agreement negotiated by President Trump, USDA and EPA that was announced on October 4."

The EPA will take comments for 30 days, hold a public hearing on Oct. 30, then release a final rule.