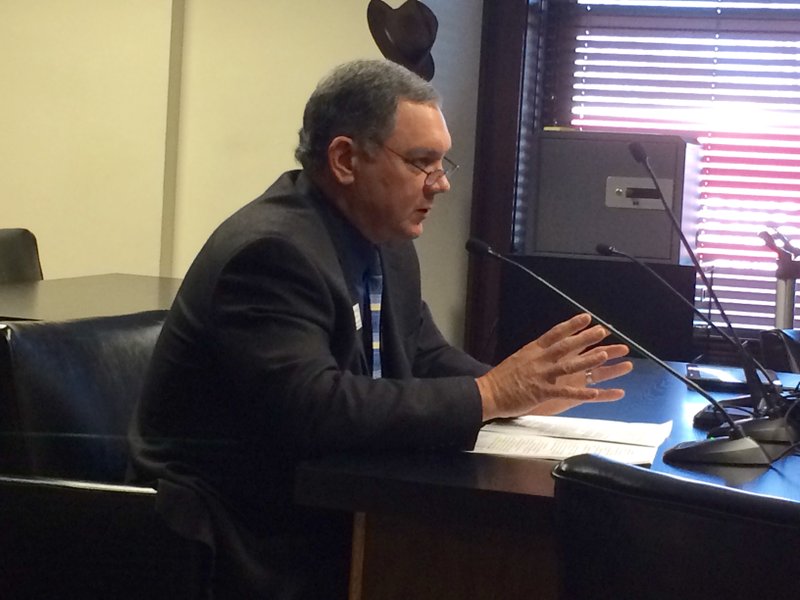 Richard Abernathy, the executive director of the Arkansas Association of Educational Administrators, is shown in this file photo.

A panel of lawmakers Wednesday supported a proposed four-year solution for paying higher salaries to starting teachers, but a permanent solution will be needed for the years after.

The Arkansas Department of Education proposed parameters for disbursing $60 million over the next four years to public schools in the state where first-year teachers make less than $36,000 annually. However, education groups remain concerned about year five, when those funds are gone.

The proposal would meet the requirements set out under Act 170, which the General Assembly enacted earlier this year, raising the mandated minimum teacher salary in Arkansas from $31,800 to $36,000 by 2023.

The department's plan was reviewed Wednesday by the Administrative Rules Committee of the Arkansas Legislative Council. If the Legislative Council, which meets Friday, gives final approval to the Education Department's proposal, the state money will offset the costs of implementing the required pay raises for more than 160 districts, if those schools apply for the supplemental funding. There are 238 public school districts in Arkansas and 26 open-enrollment charter school districts.

The pay raises will be reflected throughout the minimum salary schedule in Arkansas. For instance, a fifth-year teacher with a master's degree must be paid a minimum of $39,950 this school year. By 2023, a teacher with the same amount of education and experience must make at least $43,150.

The teacher pay bump was a pillar of Gov. Asa Hutchinson's legislative agenda during the 2019 regular legislative session that concluded this spring.

Before passage of Act 170, called the Teacher Salary Enhancement Act, Arkansas' bottom teacher salary ranked in the middle among Southern states. But once the law is fully implemented, Arkansas will have the highest minimum starting salary among surrounding states unless legislative action is taken in those states.

Education groups said the supplemental funds available to schools under the proposal will help raise salaries initially, but they've cautioned that those school districts -- many of which have smaller tax bases -- will still be on the hook to pay those salaries once the state funding assistance ends in 2023.

"This funding was crucial for some of our smaller, poorer schools, as everyone knows that our teachers deserve a raise," Abernathy said. "We do have school districts who are concerned that this funding stream dries up in four years, and they wonder what happens after that. We are working with legislators to find a solution to the funding cliff, and hopefully this can be addressed in the 2021 legislative session." The 2021 regular legislative session will cover any type of legislation; the 2020 fiscal session is for budget bills only.

Lawmakers have said they'll ensure districts continue to receive enough money to cover the increased payroll costs. In addition to the teacher salary bumps, school districts are seeing payrolls increase for non-classroom employees affected by the state's minimum wage increase, which voters approved in 2018. The higher minimum wage is being phased in through 2021.

Rep. Bruce Cozart, R-Hot Springs, who chairs the House Education Committee, said legislators must keep those factors in mind as they study education funding levels over the next year.

The House and Senate Education committees conduct an "adequacy study" every two years to review the state's public school funding needs and then make recommendations to the governor and Legislature.

"We're going to have to be sure to work those [salary increases] in and make sure we keep up with what it's going to cost those schools to implement them," Cozart said Wednesday. "It's just going to add some money to the overall picture. I don't think it's going to be difficult to do. [Lawmakers] know what we did last session, and they know we need to appropriate money to match that program."

Under the proposal, school districts must apply for the funds by submitting plans indicating how they will implement the salary increases and if they expect any staffing changes.

The new proposal provides that if the $60 million is not sufficient to fully fund the plan, the money will be distributed to eligible schools on a pro-rated basis.

Asked if the Education Department believes $60 million will be sufficient to completely cover the costs of the proposal through 2023, spokeswoman Kimberly Mundell said: "The program is to utilize the $60 million to assist districts as they move to a minimum starting salary of $36,000 over the four-year period."