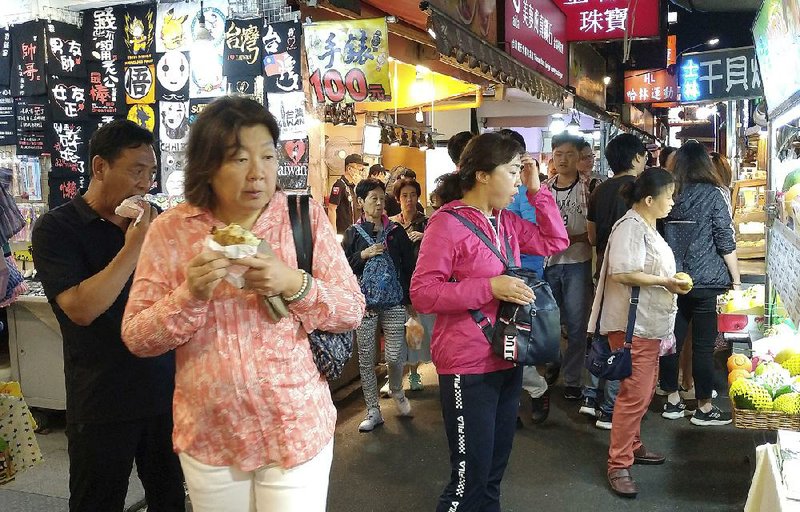 Death toll at 5 in Philippine earthquake

The Office of Civil Defense said two people died and 18 were injured in a landslide set off by Wednesday night's quake in Davao del Sur province's Magsaysay town, where a child also was killed after a wall collapsed on her.

Officials reported two more deaths elsewhere, including a girl hit by a collapsed wall in southern Maguindanao province. More than 50 people were injured in total, mostly after being hit by concrete walls and falling objects.

The Philippine Institute of Volcanology and Seismology said the 6.3 magnitude quake was centered 14 miles southeast of Tulunan in North Cotabato province at a relatively shallow depth of 5 miles. More than 200 aftershocks have been recorded.

The U.S. Geological Survey placed the magnitude at 6.4 with a depth of 9 miles. Shallow quakes tend to cause more damage than deeper ones.

Some areas lost power, including the transport hub of Kidapawan city. A fire broke out in the Gaisano shopping mall in General Santos city shortly after the quake, but there were no reports of people trapped.

Vice Mayor Joselito Pinol of North Cotabato's M'lang town said patients were evacuated out of a hospital to ensure their safety during the quake. Several buildings were damaged, including Pinol's office, where the glass-windowed facade fell.

Ministry spokeswoman Maria Zakharova said Thursday that the Americans, described as military diplomats, were not held in custody after they were stopped a day earlier.

She told a briefing that the Americans had received permission to travel to the city of Arkhangelsk, but instead went to Severodvinsk, 20 miles to the west, where they boarded a commuter train to a community near the naval range. Police informed them they were "in a zone of restricted visitation," she said.

Two servicemen and five nuclear engineers were reported killed in the Aug. 8 explosion.

Gunmen kill children on way to get shots

CAIRO -- Gunmen in Libya killed two women and three children of the same family while they were driving on a highway near the capital, Tripoli, less than a week after an airstrike slammed into a house killing at least three civilians, a health official said Thursday.

The city has been the scene of fighting between rival militias since April. A U.N.-supported but weak government holds the capital, but the self-styled Libyan National Army -- which is associated with a rival government in the country's east -- is trying to seize it.

Abdel Rahman al-Tamimi, his wife, sister and three children were traveling Wednesday evening to the capital from their hometown of Aziziya, south of the city, when unknown militants opened fire on their car, said Malek Merset, a health spokesman with the U.N.-backed government. The family was headed to the capital, where the children, ages 3 to 6, were expected to receive vaccination shots, Merset said.

It wasn't immediately clear who was behind the attack. However, Libyan National Army spokesman Ahmed al-Mesmari blamed the attack on militias allied with the Tripoli-based internationally recognized government.

Earlier this week, the Tripoli-based Government of National Accord held the Libyan National Army responsible for the shelling of a civilian residence that killed at least three civilians and the wounding of two, including children. The group denied the accusation saying that it targeted a military camp that the Tripoli militias used as an "operations room."

LONDON -- Commuters scuffled with climate activists who climbed onto the roofs of trains early Thursday, snarling services in the busy morning rush hours in the British capital.

Television images showed at least one man reaching up and grabbing the leg of an Extinction Rebellion group protester on top of a Tube train, dragging him onto the platform where he was quickly surrounded as he lay on the ground.

British Transport Police say they were called to three stations in east London early Thursday after protesters climbed onto the roofs of trains or glued themselves to the carriages.

Robin Boardman, a spokesman for the protesters, said that if such action is necessary to make the government take notice of their climate change demands, "then this is what we must do."

"This illegal action is extremely dangerous, counterproductive and is causing unacceptable disruption to Londoners who use public transport to get to work," he said. 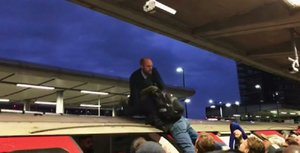 Photo by AP/ITN
In this photo taken from video, a man with a backpack grabs a protester atop a train Thursday in London.