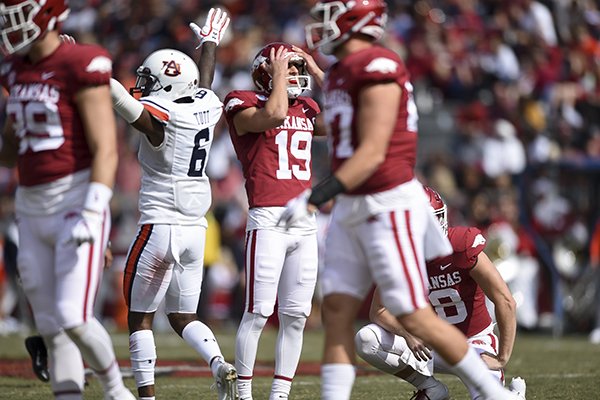 Arkansas kicker Connor Limpert (19) reacts after missing a field goal during a game against Auburn on Saturday, Oct. 19, 2019, in Fayetteville. ( Charlie Kaijo)

FAYETTEVILLE -- Auburn extended its winning streak against the University of Arkansas to four games with a 51-10 victory Saturday at Reynolds Razorback Stadium.

It's the longest winning streak for either team in a series the Tigers lead 17-11-1, but none of the past four games have been close. Auburn has outscored Arkansas by a combined margin of 193-36 in the four-game stretch.

Arkansas last beat Auburn in 2015 when the Razorbacks won 54-46 in four overtimes.

[Video not showing up above? Click here to watch » https://www.youtube.com/watch?v=yojCaUnEN9Q]

The Razorbacks are the only SEC team Auburn ever has beaten by at least 31 points in four consecutive games.

Hicks all the way

Arkansas senior Ben Hicks said he found out he'd be the starting quarterback against Auburn when Coach Chad Morris told him Friday night.

Nick Starkel had started the previous four games at quarterback after Hicks started the first two games, and Morris said the position would be re-evaluated last week.

Auburn took a 44-10 lead with 7:03 left in the fourth quarter, but Morris opted to keep Hicks in for the entire game.

"When it got late in the game like that, it wasn't fair for any of those other guys to go in in that moment," Morris said.

Hicks completed 19 of 39 passes for 182 yards and 1 touchdown, but he also had 2 turnovers with a lost fumble and an interception.

Two starting seniors on the left side of the offensive line -- tackle Colton Jackson and guard Austin Capps -- didn't play in the second half after suffering injuries and were replaced by junior Myron Cunningham and redshirt sophomore Kirby Adcock. Freshman starting defensive end Mataio Soli also was injured in the first half and didn't return.

Coach Chad Morris said he didn't know what injuries the three suffered or their status for next week's game at No. 1 Alabama.

Darren McFadden -- who as a Razorback won the Doak Walker Award as the nation's top running back in 2006 and 2007, and finished second in the Heisman Trophy voting both seasons -- expressed his support of Arkansas Coach Chad Morris prior to Saturday's game.

McFadden was honored for his induction this year into the College Football Hall of Fame and met with the media.

"Me being an Arkansas kid, I love being around the program regardless of who the coach is," McFadden said when asked about his thoughts on Morris. "But Coach Morris is a special guy. I definitely enjoy talking to him."

Arkansas fell to 4-15 in Morris' two seasons as coach.

"He's one of those guys that definitely I think can get this program turned around," McFadden said. "Just needs a little time. Looking forward to the future."

McFadden said he talked to some recruits Friday night.

"I just told them I'm not going to sugarcoat anything, we're having a down season," McFadden said. "It has been a bad few years for us. But like I told them, 'We need guys like that to come in here and help us get back to where we need to be.' That's my message to them."

Loy attempted a high, two-handed pass intended for De'Vion Warren, who was cutting in front of him, but it never had a chance of finding its intended target.

"Yeah, not the result that we were looking for," Arkansas Coach Chad Morris said. "It was something [Auburn] had showed [in film study], and we actually had been working on that for a couple of weeks.

"I thought at the time we needed something to maybe get us kick-started. We just weren't moving. I knew we needed a spark to get a possession somewhere. Luckily, they missed a field goal, so that didn't hurt us at that point. We were looking for anything to try to get us a spark."

Auburn took possession at the Arkansas 37 after the botched fake and moved to the 22, but T.J. Smith and Bumper Pool sacked quarterback Bo Nix on third down to force a 48-yard field goal attempt by Anders Carlson.

Carlson missed wide right to keep the Tigers' lead at 17-0.

"They're trying to win the game," Auburn Coach Gus Malzahn said of the fake-punt call. "We were fortunate enough to sniff it out. I think that was big."

Morris was asked why Loy made a two-handed pass.

"They had a full-on rush, and [the plan is] to let the rush come and just a touch pass over the top just a little, like a basketball shot with [Warren] running underneath it. More of a screen like. Didn't execute."

Auburn sophomore placekicker Anders Carlson missed the first extra-point attempt of his career Saturday, but not before he helped the Tigers set the NCAA record for consecutive makes.

Carlson hit his first four extra-point attempts to extend Auburn's streak to 304 and break the NCAA mark of 302 in a row by Florida State from 2012-16. He's one of five kickers who hit extra points during the streak, including his older brother Daniel Carlson, who hit 198 attempts from 2014-17 and currently plays for the Oakland Raiders.

The streak was begun by Cody Parkey -- who now plays for the Tennessee Titans -- in 2013 after he missed an extra-point attempt against Tennessee.

"It is the biggest blessing, just being a small part of a big thing going back to Cody and D and all their long snappers and all their holders," Anders Carlson said.

"I don't even want to think about that," Carlson said when asked how it would have felt to miss before setting the NCAA record.

What happened on the miss?

"Coming toward it, I saw laces back and just didn't drive through it like I should have," Carlson said.

Carlson hit his first 78 attempts before Saturday's miss. The miss wasn't significant in the game's outcome as Auburn led 37-10 with 11:54 left in the fourth quarter.

Linebacker Bumper Pool made a save on the play when he kept the ball from going out of bounds so Agim could recover it.

Auburn Coach Gus Malzahn improved to 9-0 after an open date, which the Tigers had last week. That includes an 8-0 mark in SEC games and 4-0 in road games.

Arkansas has lost 13 consecutive games to nationally ranked teams after falling to the No. 11 Tigers.