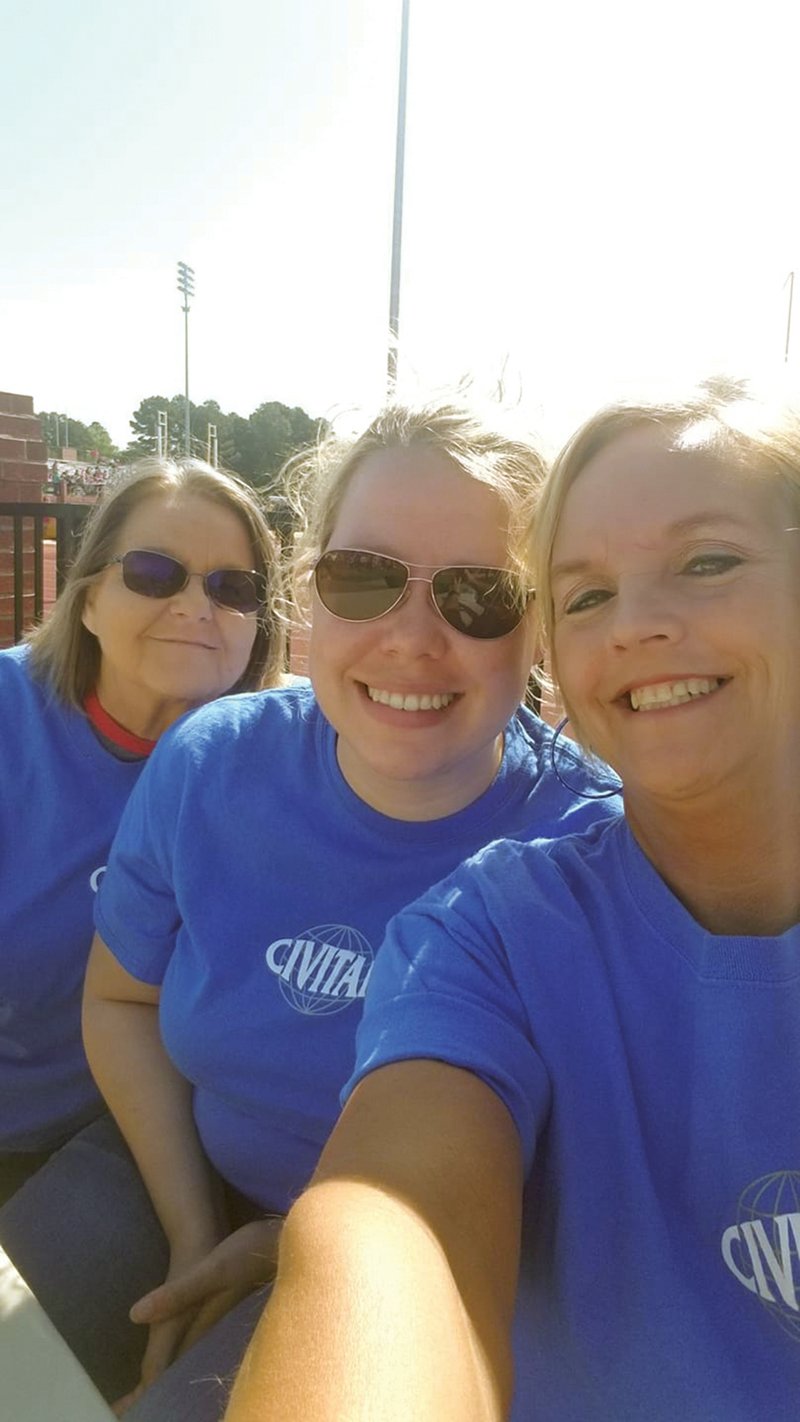 SEARCY — After her term as president of the Searcy Civitan Club, Janice Collins passed the gavel on Thursday to Ashley Vaughan, who said the organization’s vision is one that is especially meaningful to her.

According to civitan.org, “Civitan International is an organization of volunteer service clubs around the world, dedicated to helping people in their own communities. Civitans help wherever the need arises.”

The clubs have a special focus on helping people with developmental disabilities, and local groups work to support the Special Olympics.

“Civitan is a big supporter of the Civitan International Research Center in Alabama,” Collins said, which researches disorders such as autism, Down syndrome, brain tumors, epilepsy and more. “The Searcy Civitan members helped with the Day of Caring, collecting over 400 bars of soap this year, and helped with Special Olympics and other activities in the area.

“We also have someone from the area to speak at our meeting. I love to help and serve others, and when my friend Michela Fowler asked me to join the club, I was so excited to get to be involved.”

Vaughan said she is “very excited and honored to be the president” this year.

“At first, I was a little apprehensive when Janice asked if I would be interested in being the president,” Vaughan said. “I have been with Civitan for two years now, and I absolutely love it.”

Vaughan praised Collins’ job as leader of the club, in addition to Fowler, who was the president the previous year.

“They both have really opened themselves up to me since I joined Civitan and really embraced me,” Vaughan said. “They are amazing women. You can tell this club is really important to them.”

Vaughan said that being president of Civitan means creating a partnership with an organization “that has a vision close to my heart.”

By this, Vaughan said, she means that the emphasis the club has on helping people with disabilities hits close to home for her.

“I have an uncle who has been in a facility most of his life due to mental disabilities,” she said. “To be able to help our community and volunteer at events such as local Special Olympics competitions and spend our time at a home here in Searcy means a lot to me.

“I don’t know that I can accomplish as much as I would like in a year, but I would love to see the club be more visible in our community.”

Vaughan said many people “often look confused” when she tells them about Civitan.

“They have no idea that we exist,” she said. “I am one of the youngest members and would love to see more people my age join.”

Vaughan, 35, grew up in Heber Springs and graduated from high school in 2003 and from Arkansas State University in 2012 with a bachelor’s degree in management. She has a twin brother who lives in Little Rock.

“I have to say that my grandma has inspired me the most,” Vaughan said when asked about her greatest influence in life. “She is one of the strongest women I know. Not only did she raise three kids. … She was married to my grandfather for 52 years before he passed in 2008, and she kept my uncle at home to care for him until she physically couldn’t. She is so creative: She was a hair stylist for many years, worked at a florist in Heber Springs (where she lives), makes beautiful paintings, crochets and still quilts by hand. She is almost 84 years old. She volunteers at Cleburne County Cares and still travels a lot to see family around the country.”

Collins has been married for 15 years and has a 14-year-old son. Her family lives in Pangburn and commutes to Searcy for work. She works for Edward Jones and has for more than seven years. She is currently a senior branch-office administrator.

Fowler has been in the club for four years and was president for the two years before Collins took the helm.

“[Collins] and I have worked together for several years and been in Civitan together for about three years,” Fowler said. “The best part of being in this civic club is being able to help our local special-needs children and adults.

“We help with the Searcy Sunshine School and Special Olympics that takes place at Harding University. Fundraising is a big deal, Fowler said.

“All of us work together on various fundraisers,” she said. “We all share the same goal of helping others.”

She said working with Collins was enjoyable, and there was never a dull moment.

“She has a big giving heart and is a close friend of mine,” Fowler said.

Collins grew up on a farm near Possum Grape with three sisters and five brothers. She graduated from Bradford High School in 1971. She then went to Searcy, where she earned a degree in business at Foothills Vocational Technical School, now Arkansas State University-Searcy, a year later.

Collins married Jerry Collins and had a daughter, Jennifer, and now has three stepchildren, three grandchildren and three great-grandchildren.

“I love little children,” Collins said. “They hold a special place in my heart. I have been accused of spoiling them, but isn’t that what grandmas are for?”

When she was growing up, she said, she was most influenced by her parents.

“And now, my church family is a great influence in my life,” Collins said.

She began her journalism career in 1978 by working at the Newport Independent as the classified ads manager and in the composing room, a position she held for 10 years before moving on to The Daily Citizen in Searcy for the next 18 years. At the Citizen, Collins worked as composing-room supervisor.

In 2008, she began working at First Security Bank in the mortgage department as an HMDA (Home Mortgage Disclosure Act) clerk and continues to work there, where “we are ‘making better happen,’” she said.

Vaughan, the new president, is a “smart, young lady,” Fowler said. “We are excited to see her new leadership. I believe she will be bringing in new, fresh ideas.”