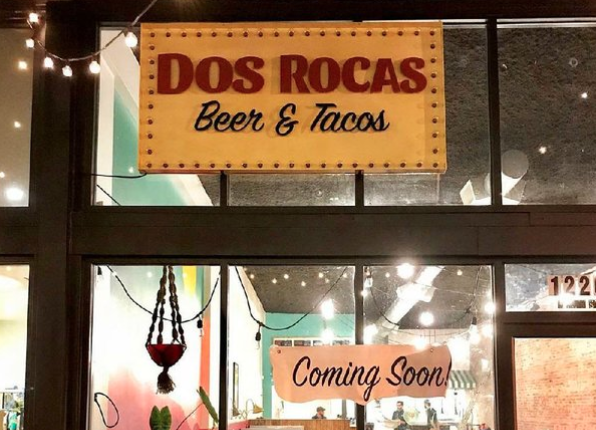 The name — the mockingbird is the Arkansas state bird — reflects their decision to add a locally grown focus to the previous Latin American-centered menu. It also solidifies a link with the Sundell’s other operation, the farm-to-table-centered Root Cafe, two blocks south at 1500 Main.

The changeover, though it only became official Thursday, has been in progress for a month, Jack Sundell said.

“We’ve been sprinkling in some new menu items and redoing the dining room,” he explained. The timing of the official name change coincides with the Arkansas Cornbread Festival, taking place Saturday in the SoMa neighborhood along Main Street.

Sundell said their prior partners in Dos Rocas, longtime Root kitchen manager and Paraguay native Cesar Bordon and his wife, Adelia Kittrell, had departed “for personal reasons,” and one reason for the name change was because the Dos Rocas name and menu “was their story.” Dos Rocas in Spanish means "two rocks" — the town where Bordon grew up, means “rock” in his indigenous language, Guarani, and the other is Bordon’s adopted home, Little Rock. The menu, which centered on Latin American street food, also reflected Bordon’s background.

Now, Sundell said, “We want to reinvent it, to make it more reflective of our story, Corri’s and mine.” The new menu will keep a few Dos Rocas holdovers, including the guacamole and queso, some of the tacos, the empanadas and the Nachos Rocas — but some of them will have new aspects, such as the Sweet Potato Adobo empanada, for which the filling will come from the farm in Wynne that supplies the sweet potatoes for the sweet potato fries at The Root that Mockingbird also now serves.

The concept, Sundell said, will now be on taking Latin American flavors and “foodways” but “through the perspective of Arkansas seasonal ingredients.” To that end, as at The Root, more than a dozen area farms will supply fresh produce, eggs and 100 percent of the meats to the Mockingbird tables.

Sundell said he’s shifting from an emphasis on a la carte service to having more plates, which will also give the restaurant more of a family focus and further tie it to The Root. There will be happy-hour and daily specials — for example, $2 taco Tuesdays and empanada Wednesdays.

The new restaurant will offer beers on tap — 15 from local craft breweries plus the Mexican-brewed Modelo Especial — and margaritas made “only (with) freshly squeezed lime juice.”