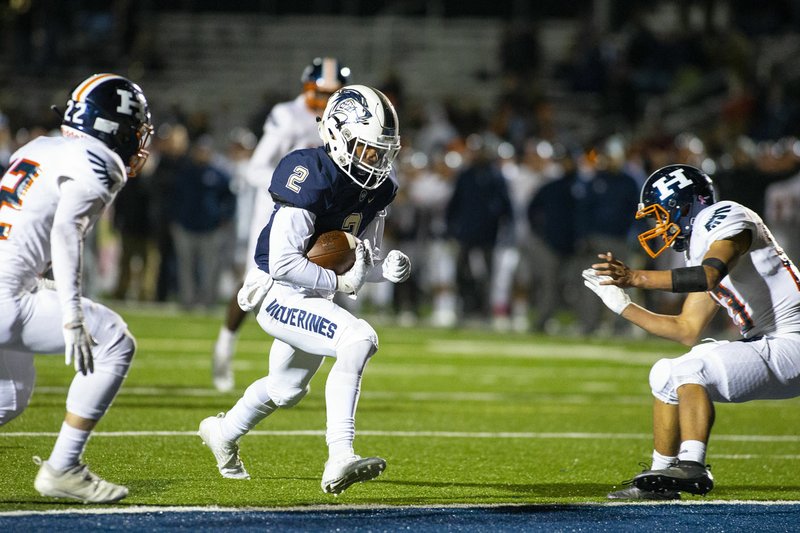 It didn't matter for Bentonville West. There were plenty of weapons still available at the Wolverines' disposal Friday night.

The win, coupled with Springdale Har-Ber's win over Van Buren, means West (6-2, 5-0 7A-West) has clinched a first-round bye for the Class 7A State Playoffs and has set up a meeting with Bentonville High for the conference championship in two weeks.

The Wolverines did it without six starters. That included Higson, one of the team's leaders who will miss the rest of the season with a knee injury, and Whitlatch, who was held out after a non-football injury.

"We've talked about you're just one play away from being the guy," West coach Bryan Pratt said. "Even though we had some injuries, for us to win tells a lot about our team's character and what we think about each other.

"You're only as strong as the weakest link, and we're hoping we can continue winning and that weakest link will stay behind us for a while."

Nolan Schmitt needed less than a minute to put West on the scoreboard when he hauled Dalton McDonald's 14-yard pass for a touchdown, then the Wolverines did turn to the ground game. Humes scored on a jet sweep from 4 yards out midway through the first quarter, then Trenton Davis -- a converted lineman because of the Wolverines' injuries -- bulled in 3 yards out and made it 21-0 with 3 minutes, 9 seconds left in the first quarter.

Moss, a receiver who was still looking for his first score of the season, went to work after that. He scored on a 3-yard run to end the first quarter, then added touchdown runs of 17 and 10 yards in the second quarter. He blocked a punt, which Humes returned 12 yards for a score to give West a 50-0 halftime cushion.

"I'm really excited," Moss said. "The offensive line blocked great, and I was really feeling it. I'm just happy for a good team win. It's a different feeling, but anyway I can get the ball in my hands, I just want to make plays for my team.

"We had been practicing the blocked punt all week, and I had to make sure I go to the spot and block the punt. If you do the little things right, you will win the game."

• The Wolverines' other scores came on a 4-yard run by Dakota Gaines late in the third quarter and an 11-yard touchdown pass from backup quarterback Aaron Arnold to Aiden Clingfost with 5:58 remaining.

• Heritage's only score came when Eli Craig bolted 80 yards for a touchdown on the third play of the second half.

• Heritage returns to 7A-West Conference play next week when it hosts Fayetteville. West plays next week at Van Buren, which will be hosting its last 7A-West game since it becomes a Class 6A school next season.