Medicaid insurer told it must refund $12.3M; state, consumers to be the recipients 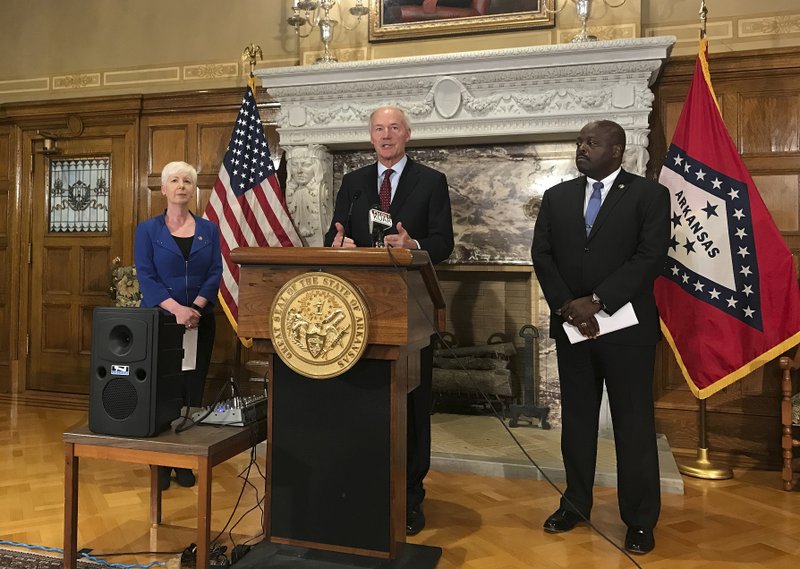 In this Sept. 12, 2018, file photo, Arkansas Gov. Asa Hutchinson, center, talks at a news conference at the State Capitol in Little Rock, Ark., about the state's Medicaid program.

An insurer participating in the Arkansas Works Medicaid program was required to refund $12.3 million to the federal government, state and consumers after collecting too much in premiums compared with what it spent on claims, according to federal reports.

According to the reports by the U.S. Department of Health and Human Services' Centers for Medicare and Medicaid Services, St. Louis-based Centene collected $983 million in premiums for its plans covering Arkansas Works enrollees and other consumers in the state from 2016-18, but spent just $756 million of that on medical care and other health-related expenses.

The percentage of premiums that went to health care expenses -- 77% -- fell short of the 80% minimum percentage, known as the medical loss ratio, established by the 2010 Patient Protection and Affordable Care Act, triggering the required refunds.

According to the reports, Centene's plans covered 70,808 Arkansans as of March 31. Most of them are Medicaid recipients who have their premiums paid by the state Medicaid program under Arkansas Works. The company's plans are also available to consumers through the healthcare.gov website.

[HEALTH & SCIENCE: Get a weekly review of the top headlines in this email newsletter from reporter Emily Walkenhorst » arkansasonline.com/emails/science]

The refunds averaged $108 for each of the 113,284 policyholders covered under one of the company's plans from 2016-18. In the case of Arkansas Works plans, most of the money was owed to the federal government, which pays for the bulk of the cost of the coverage, and the state.

A spokesman for the state Department of Human Services didn't have information Friday on how much money to be refunded was in connection with Arkansas Works plans.

In a statement Monday morning, Centene said it "took a variety of factors into account when developing our products" that provide health coverage to Arkansas Works enrollees and are available to consumers through Arkansas' health care exchange, or marketplace. Consumers can shop for the plans on heathcare.gov.

"Our premiums must be filed and approved by the state regulators, who examine the reasonableness of our rates to our coverage and potential health needs of the local population," the company said. "We work collaboratively with the state to ensure our coverage and price meet the objectives of the Arkansas Marketplace program to deliver access to quality care to Marketplace members."

The refund was the largest amount owed in a single year by an insurer in Arkansas since the requirement kicked in for premiums collected and expenses paid in 2011. The previous highest refund amount was $6.8 million that Centene owed in 2015.

Arkansas Blue Cross and Blue Shield and QualChoice Health Insurance also offer plans through healthcare.gov and to Arkansas Works enrollees but have not had to issue refunds in connection with that coverage.

QualChoice, which was bought by Centene earlier this year, was required to pay $3.4 million in rebates in connection with employer plans covering businesses with 51 or more employees. For such plans, insurers are required to meet an 85% medical loss ratio.

Reliance Standard Life Insurance Co., a division of Tokio Marine Holdings in Japan, also owed $19,529 in connection with its large group plans. Such rebates are typically paid to the employer, who can pass the rebates along to the employees or apply it "in a manner that benefits" them, according to a Centers for Medicare and Medicaid Services report.

Arkansas Works covers people who became eligible for Medicaid when the state expanded it in 2014. The expansion, authorized under the Affordable Care Act, extended eligibility to adults with incomes of up to 138% of the federal poverty level.

The federal government paid the full cost of coverage under the program from 2014-16. Arkansas became responsible for 5% of the cost in 2017. The state's share rose to 6% last year and is 7% this year.

Through healthcare.gov, the Affordable Care Act makes subsidized coverage available to many people who don't qualify for Medicaid or other government programs, lack access to coverage through an employer and have incomes below 400% of the poverty level.

The annual sign-up period for plans offered through the federal website starts Friday and runs through Dec. 15.