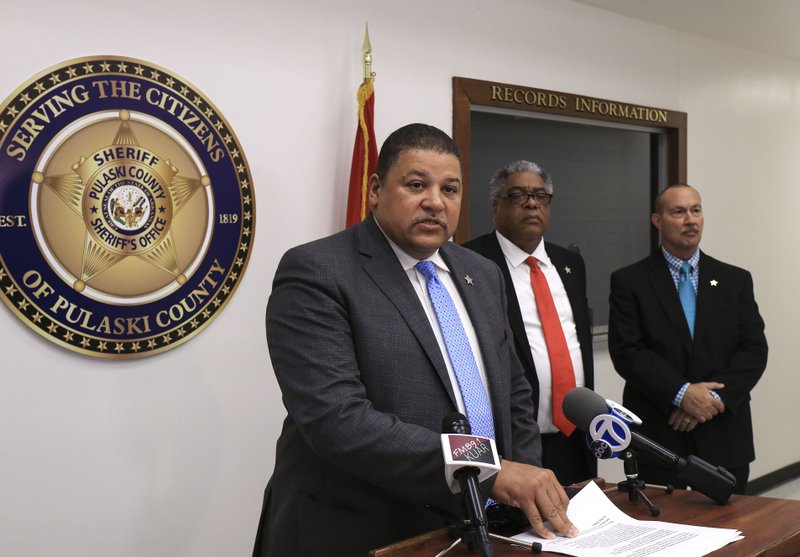 Sheriff's office officials announced Monday a $1.2 million investment into Axon body cameras that will be used by deputies on the streets and in the state's largest detention center. The purchase also will include cameras inside patrol and transport vehicles.

The investment includes 235 body-worn cameras for all deputies and 121 in-car cameras that will include dash and backseat cameras. Higgins said the sheriff's office hopes to have the technology implemented sometime in November.

The technology was a top priority of Higgins' administration when he was elected in 2018.

"I had great concerns that our patrol cars did not have dash cameras and our deputies were not equipped with body-worn cameras," Higgins said. "I think it's unacceptable, in 2019, that we do not have this technology available to not only our deputies, but also to the citizens of Pulaski County."

"The community wants this," he said. "To be in 2019 and to not have that technology, it put us behind the curve, so to speak."

The purchase was made possible by a $440,000 federal grant that the sheriff's office received for the body-worn cameras, spokesman Mitch McCoy said. New stun guns also were provided as part of the deal, McCoy said.

Higgins said the sheriff's office also had to make adjustments to its budget to afford a little more than half of the $1.2 million purchase. He said officials decided to use the money that could have been used to buy 12 to 13 new vehicles to invest in the camera system.

The sheriff's office will be the first major law enforcement agency in Pulaski County to have all of its employees equipped with body cameras and in-vehicle cameras.

Little Rock has applied for a matching grant for body-worn cameras, city spokeswoman Stephanie Jackson said. She expects news about the grant to come out soon.

Officer Joe Green said the North Little Rock Police Department has dashboard cameras but currently isn't equipped with body cameras for its officers. There are no plans to get body cameras at this time, Green said.

Higgins described the move to equip Pulaski County deputies with cameras as "vital" to establish trust within the community.

"In today's day, you are always being recorded," Higgins said. "I think it's vitally important that we recorded our deputies as well. We need to provide that information, and we can look at the conduct of deputies and we can evaluate based on that evidence."

The body cameras will be equipped with sensors on the stun gun and on the holster for the service weapon. If the stun gun is turned on or a deputy is forced to pull his service weapon, the body-worn camera will automatically activate.

The in-car cameras will always be on, but they can be set to record at any of several triggers, Higgins said.

"Our policy is being reviewed by the county attorney," Higgins said. "It will require deputies to turn the cameras on, but we can also have it set at a certain speed and the technology we are getting also activates other cameras as well. If one deputy's car is activated and another deputy comes up and his body camera is not turned on and he is in range ... it will also come on."

Detention Chief Deputy Charles Hendricks said 110 of the body cameras will be dedicated for use by deputies who operate in the county jail. Higgins said equipping jail staff with cameras is rare, but he views it as beneficial.

"It will help us have a safer environment inside our facility, to not only evaluate the actions of the deputy but also the people who work here," Higgins said.

Hendricks said the use of body cameras in the jail is a welcome addition. The facility deals with about 1,200 inmates every hour, every day.

"We hope to set the trend for other detention facilities to follow," he said. 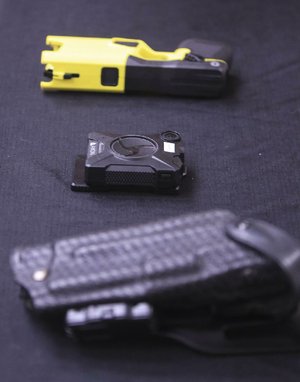 Photo by Staton Breidenthal
The Pulaski County sheriff’s office announced Monday the purchase of body cameras, along with holsters and stun guns with sensors that activate the cameras.