Crisis not over, border official warns 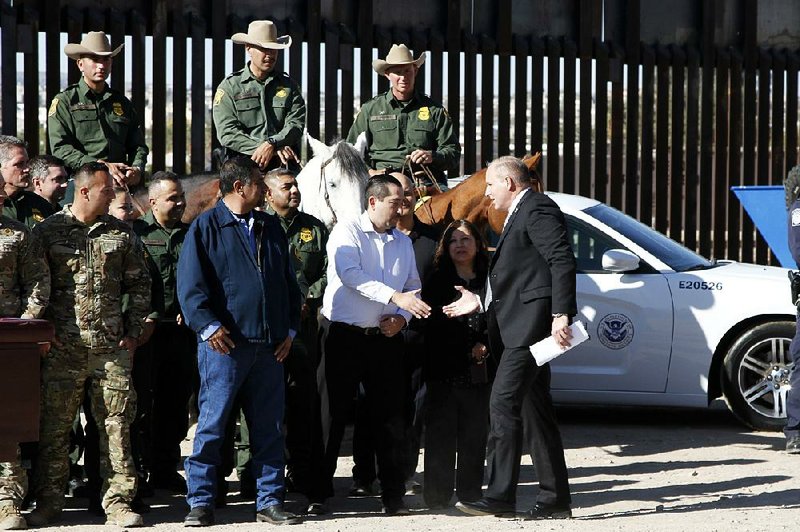 Customs and Border Protection acting Commissioner Mark Morgan (right) shakes hands with members of his staff ahead of a news conference Tuesday near the U.S.-Mexico border in El Paso, Texas. More photos are available at arkansasonline.com/1030border/

WASHINGTON -- A top U.S. Border Patrol official has a warning: The crisis at the U.S.-Mexico border is not over.

Even though crossings have been down over the past few months, the number of migrants coming over border is still high. And resources are still stretched.

"It is kind of a new norm. We're at risk at any time," if some recent deterrent efforts are blocked by the courts, like a policy forcing asylum seekers to wait out their claims in Mexico, Brian Hastings, chief of law enforcement operations at Border Patrol said in an interview.

Over the budget year that ended Sept. 30, there were 859,510 apprehensions by Border Patrol, plus more than 110,000 other encounters of people who tried to enter legally but were deemed inadmissible. There were nearly 1 million crossings from the early 2000s, but those were mostly single men from Mexico who were easily returned, not families from Central America who require much more care.

While the numbers surged, Homeland Security agents and officers were overwhelmed by the number of families crossing the border as the numbers continued to rise.

Border officers pleaded for help but it wasn't until over the summer, when reports of squalid conditions and surging numbers of detainees and children dying were published that Congress authorized additional funding to increase capacity. That funding expired at the end of the fiscal year.

There were more than 200 large groups of more than 100 migrants dropped off by smugglers in remote areas -- something that can shut down an entire station for the day for processing -- and there were at least 140,000 people who evaded capture.

Previously, 2014 was considered a crisis year, when the Obama administration saw a crush of unaccompanied children at the border. The overall apprehensions by Border Patrol were 479,371 -- there were 372,000 more in 2019.

There were more than 4,900 people rescued including an increase in river rescues -- 742 from 86 the year before.

"I am incredibly proud of the agents," Hastings said. "They have been vilified, but they deserve to be thanked because we have never, ever dealt with anything like this before."

Hastings said the so-called remain in Mexico program that is expanding in parts of California and Texas, plus a new rule barring asylum to those who pass through a third country, and crackdowns by Mexico at its own southern border have helped. More than 55,000 people have been turned back, and officials say many have gone home.

Hall defended the way his office has handled the immigration issue, saying his "approach hasn't always been popular," but it's been responsible. Going forward, his office plans to limit interactions with the immigration agency to what state law requires.

"The continued confusion and hyper-political nature of this issue has become a distraction from sheriff's office priorities," Hall said in a news release. "The number of individuals detained as a result of this contract is less than one percent of overall jail bookings; however, I spend an inordinate amount of my time debating its validity."

Hall's office says Nashville's government has received revenue since 1996 through a council-approved contract to house federal detainees, including Immigration and Customs Enforcement detainees. The Tennessee Immigrant and Refugee Rights Coalition says the contract had not been reviewed in 23 years.

Hall's office is negotiating with the U.S. Marshals Service to remove the immigration agency from that contract, but it will still house U.S. Marshals' detainees under a renewed council-approved agreement.

Information for this article was contributed by Jill Colvin, Jonathan Mattise and Adrian Sainz of The Associated Press.