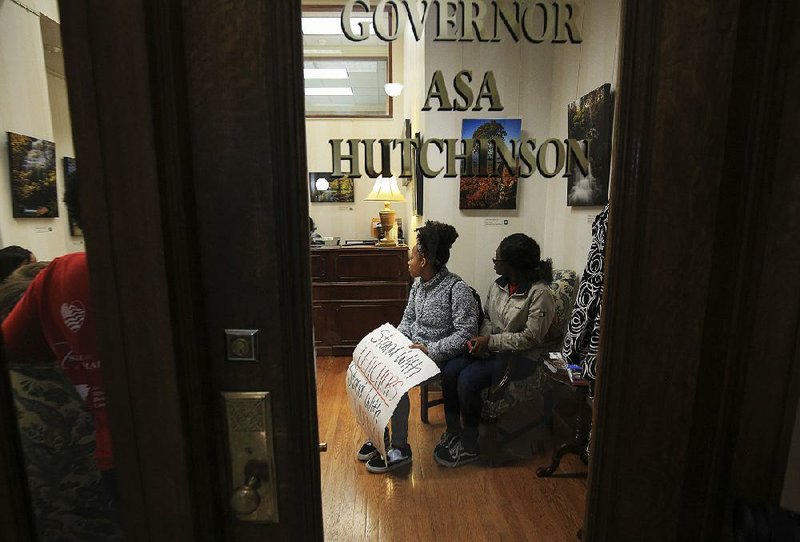 Parkview High School students Morgan Peters (left) and Diane Cooper, both 18, sit in the lobby of the governor’s office Wednesday at the state Capitol as they wait to see if Gov. Asa Hutchinson will meet with them. More photos are available at arkansasonline.com/1031lrsd/.

In a symbolic move, thousands of students from the Little Rock School District staged a "sickout" protest Wednesday in support of teachers who are about to lose union representation after a decision by the state Board of Education earlier this month.

About 100 of those who called in sick Wednesday went to the state Capitol in an effort to talk to Gov. Asa Hutchinson and voice their displeasure with the way the state has dealt with the district since taking it over and disbanding its School Board in January 2015.

The protest came one day before the expiration of the contract negotiated by the Little Rock Education Association, the teachers union. The state Board of Education voted Oct. 10 to end decades-old recognition of the union as the exclusive contract bargaining agent for employees.

[Video not showing up above? Click here to watch » https://www.youtube.com/watch?v=vqHcv2S1bfU]

District officials are preparing for a possible walkout by teachers.

Sam Triplett, a senior at Little Rock Central, said the mood around the school has been tense while waiting to see what happens.

"Everyone knows the enormity of the situation that's going on right now," Triplett said. "We know it's a David vs. Goliath type of situation."

"You have to kind of go by the policies that are a part of our district, and those are pretty specific about what a person has to do if they are going to call in sick or be gone from work for a personal day," Poore said Wednesday. "We have to be able to look at those situations, but if they're on a sick day, as an example, and if that's how they've called it in and they're out picketing on the street, that's a problem."

Poore said he hasn't heard anything concrete regarding a potential teachers strike, but the district is preparing for that possibility.

"That's why you've seen over the past few days us trying to enhance our sub pool with kind of the opportunity for people to sign up and do a one-stop shop to get signed up as a substitute in the district," he said. "Us trying to make sure we have our own members of Central Office all ready to go if need be, members of the Department of Ed, so yeah, we're planning but at this point we're not aware of anything."

Community activist Anika Whitfield, who helped organize the student protest, said students stood outside the governor's office for about an hour Wednesday but were unable to meet with Hutchinson. She said students wanted to urge Hutchinson to restore the school district to local control immediately and stop the Board of Education's action to cease recognition of the union.

Whitfield said Bill Gossage, deputy chief of staff for Hutchinson, said he would try to get one of the protesting students an audience with the governor, but Whitfield said that was unacceptable.

"We're not going to have a silo meeting," she said. "He's going to meet with all of us or none of us."

Whitfield said the actions of the governor and his staff were tantamount to "denying democracy."

"The students recognized it, which is why they stuck around as long as they did," Whitfield said.

Katie Beck, the governor's spokeswoman, said Hutchinson was not avoiding students. She said Hutchinson's schedule was already set, and that he'd offered to meet with students today.

"That's not confirmed yet," Beck said. "We're coordinating that through the superintendent and the schools, so that's why the meeting hasn't been set yet and the details are not confirmed."

Asked if the governor would consider meeting with the entire group, Beck said she wasn't sure.

"We're working with the schools on getting representatives from each school to have a meeting with the governor," Beck said. "In terms of exact numbers, I don't know."

Beck also pointed out that regardless of whether Hutchinson meets with students, he lacks the authority to overturn actions by the Board of Education.

State Education Secretary Johnny Key released a draft memo Tuesday that laid out a framework for the creation of community schools and outlines conditions under which the school district will be returned to local control. That memo, according to some critics, was drafted without input from parents, educators and community members from within the district. Whitfield said such a decision leaves out the people who will be most affected by whatever decisions are made.

Poore said Wednesday's spike in absenteeism -- which he acknowledged was a significant increase over the previous day -- could be attributed to any number of things, and not just the walkout by students.

"It was a cold, wet, rainy day, which sometimes hurts our attendance, not by that much, but it does hurt it," Poore said.

The superintendent also pointed out the district won't hold classes today and Friday because of a professional-development conference.

"Many times the day before a holiday or a professional-development day, our attendance drops," he said.

Vicki Hatter, an education advocate from Little Rock, said the experience of going to the Capitol to protest served as a real-life civics lesson for many of the students, and an example of the power of ideas.

"If we just think about how a student had a thought and put it out on social media, how other students then start contacting that student, and then how they started to organize, I think that's the power of civil disobedience and how it works." 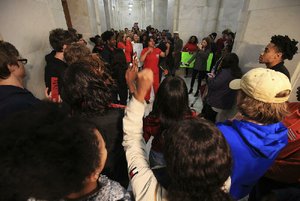 Photo by Staton Breidenthal
Students and parents from the Little Rock School District gather outside the governor’s office Wednesday at the state Capitol as they wait to see if Gov. Asa Hutchinson will meet with them. Video is available at arkansasonline.com/1031students 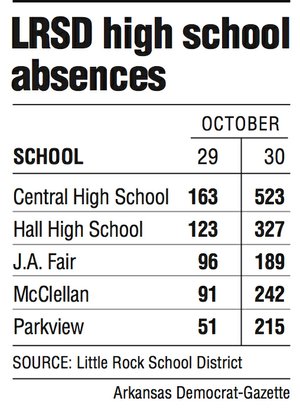