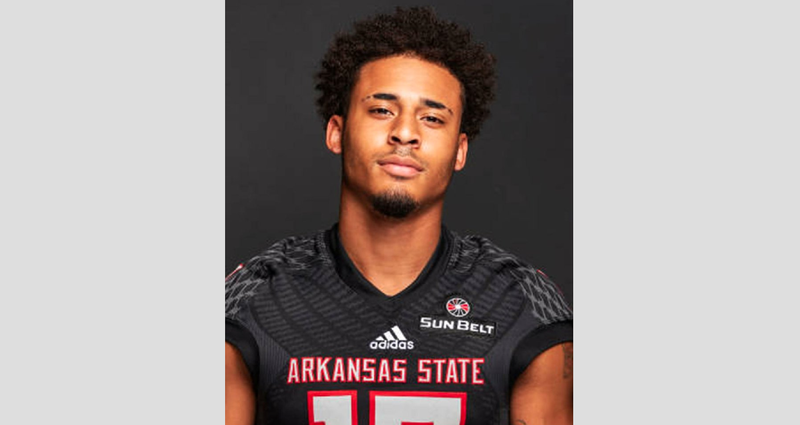 Arkansas State University sophomore cornerback Nathan Page has been suspended from the Red Wolves after he was arrested.

Page was arrested Wednesday at 2:50 p.m. in Jonesboro and charged with third-degree domestic battery of a pregnant person, according to the Craighead County sheriff's office online records.

Page's suspension is another blow to the Red Wolves' secondary, which has lost junior cornerbacks Jerry Jacobs and Demari Medley for the season. Jacobs suffered a torn ACL on Sept. 14 against Georgia, and ASU Coach Blake Anderson announced on Oct. 21 that Medley had been dismissed from the team.

Page, a Joe T. Robinson graduate, had started the past five games in Jacobs' place. On Saturday against Texas State, Page had a career night with two interceptions -- both coming in the third quarter -- as well as two tackles and a pass breakup. He was named the Sun Belt Conference defensive player of the week Monday.

He has 34 tackles, 2 interceptions and 6 pass breakups in 7 games.

With Page out of the mix, ASU's depth at cornerback is thin. The Red Wolves likely will turn to freshman Jarius Reimonenq, who's seen limited action.

Redshirt junior walk-on Colby Sigears and freshman Samy Johnson, who was moved from running back to corner earlier this season, are options behind Reimonenq.

The University of Central Arkansas shot 63.6% from the floor in the second half Wednesday and held the University of the Ozarks to 20.6% shooting for the half as the Bears beat the Eagles 96-63 in an exhibition game at the Farris Center in Conway.

The University of Arkansas at Little Rock received six of 12 first-place votes and 127 points Wednesday to be selected as the preseason favorite to win the Sun Belt Conference, according to conference head coaches, while Arkansas State University was picked to finish 10th.

The University of Arkansas finished in second place Wednesday at the White Sands Invitational in Nassau, Bahamas.

Freshman Ela Anacona shot a 3-under 69 to finish at 5-under 211, good for sixth place individually. Freshman Kajal Mistry shot an even-par 72 Wednesday to put her at 1-over 217 and in a tie for 19th place.

Trailing 14-12 in the third set, Gillen helped the Razorbacks with an attack and a service ace to tie the set at 14-14. Georgia then rallied for six unanswered points to pull away before earning the sweep.